LONDON – The ATOM Project Honourary Ambassador Karipbek Kuyukov called on people around the world to sign The ATOM Project’s online petition to permanently end nuclear weapons testing during a Sept. 9 talk at the United Kingdom’s Parliament. 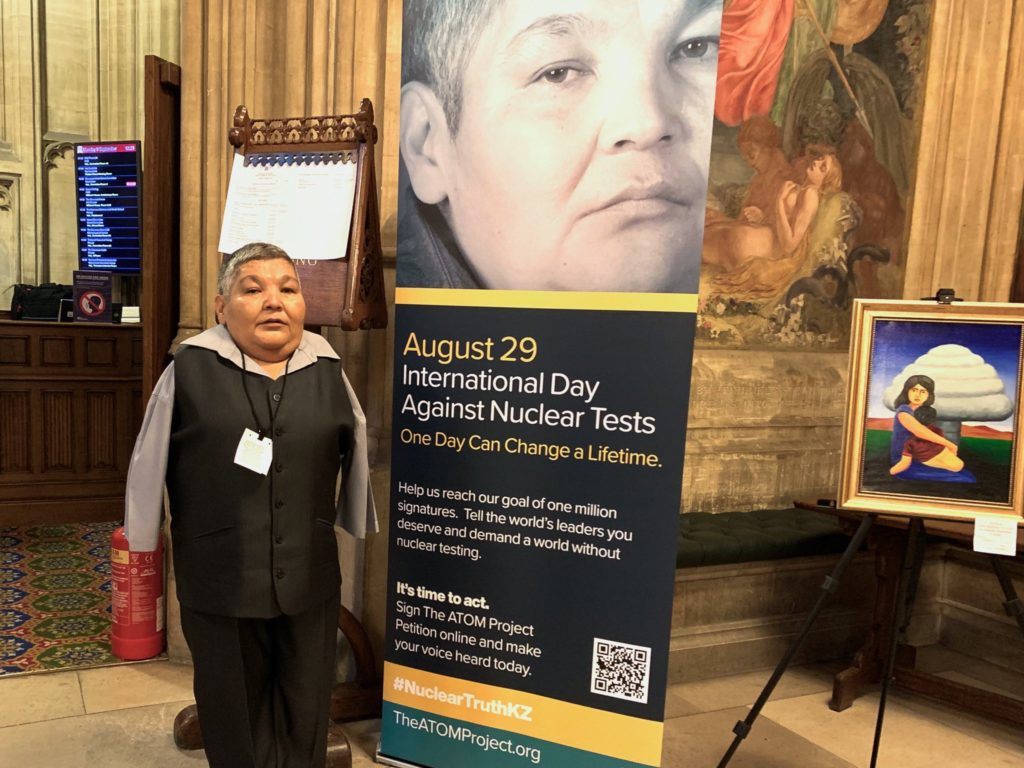 Kuyukov is among more than 1.5 million Kazakhs impacted by more than 450 nuclear weapons tests conducted by the Soviet Union at the Semipalatinsk Nuclear Test Site on what is now the territory of Kazakhstan. The site was shut down Aug. 29, 1991 under the decree of Kazakhstan’s First President, Nursultan Nazarbayev.

Kuyukov was born without arms as a result of his parents’ exposure to those tests. He has since become an internationally recognised nuclear disarmament activist and a renowned painter who has dedicated his life and art to achieving a nuclear-weapons-free world. Since 2012, he has been the Honorary Ambassador of The ATOM Project, a civic initiative launched by Nazarbayev to end nuclear weapons testing and achieve a nuclear-weapons-free world.

Kuyukov was in the United Kingdom September 8-15 to share his message and artwork with British officials and activists. 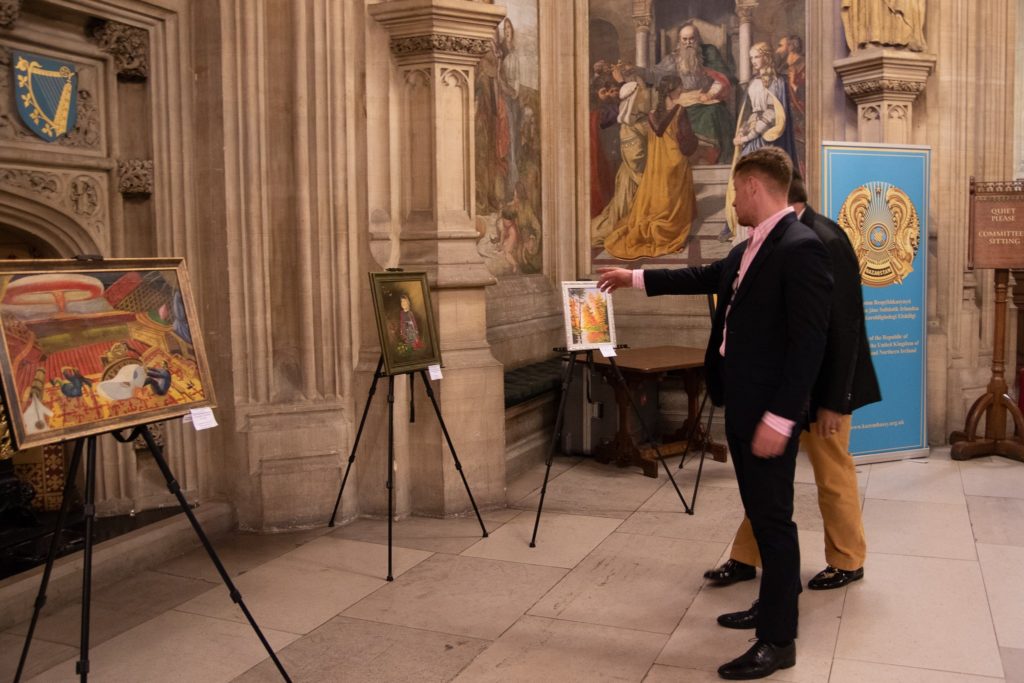 During the trip, Kuyukov also participated in a joint seminar with the Campaign for Nuclear Disarmament (CND) dedicated to Kazakhstan ratifying the Treaty on the Prohibition of Nuclear Weapons (TPNW).

Member of the House of Lords and Parliamentarians for Nuclear Non-proliferation and Disarmament (PNND) Co-President Baroness Susan Miller praised Kazakhstan’s nuclear disarmament and non-proliferation initiatives, including the resolution proposed by Kazakhstan and unanimously supported by the UN General Assembly in 2009 to proclaim Aug. 29 as the International Day against Nuclear Tests.

“Kazakhstan should be particularly commended for bringing home in such a real way the humanitarian consequences of testing and of nuclear war, because you got the UN, including the U.K., to unanimously support the establishment of this day, which is a major step on the road to recognising the absolutely disgusting nature of the most inhumane weapon you can imagine,” Baroness Miller said.

Ambassador of Kazakhstan to the U.K. Erlan Idrissov spoke during Kuyukov’s trip about the lack of confidence between nuclear powers, on-going conflicts in the Middle East and Africa, growing tensions on the Korean peninsula and the unclear fate of the Iranian nuclear deal.

“Under these circumstances, we need to assess the global risks and combine efforts to eliminate them. We need to think about what our heritage will be for generations to come. That is why achieving a nuclear-weapon-free world has become our core international goal,” said Idrissov. 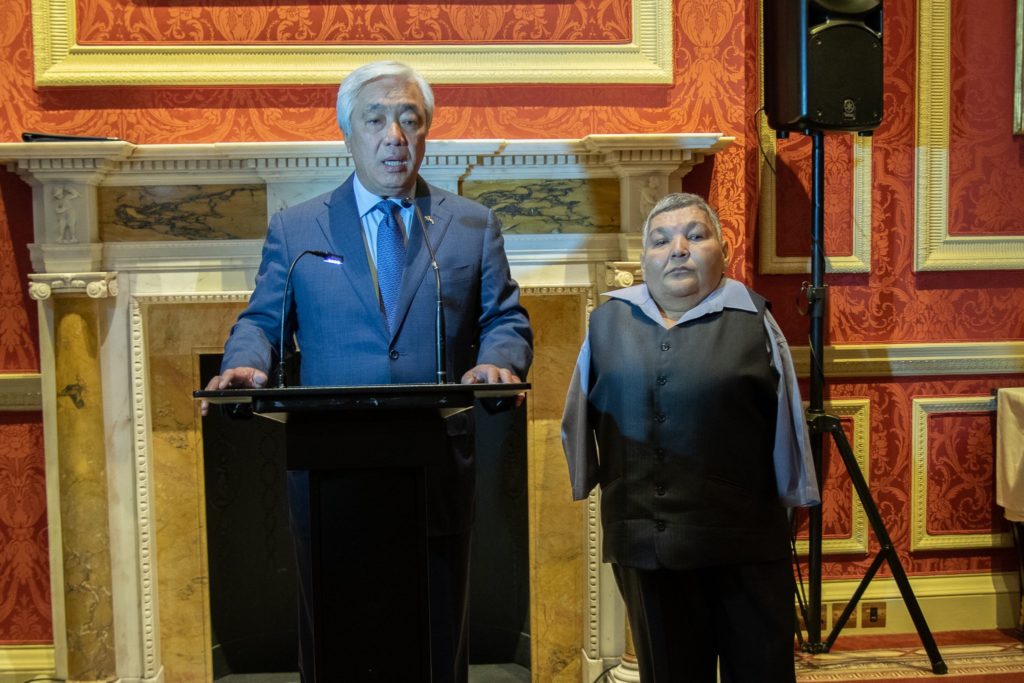 Ambassador of Kazakhstan to the UK Erlan Idrissov and Karipbek Kuyukov.

He said Kazakhstan’s renunciation of what was once the world’s fourth largest nuclear arsenal inherited from the Soviet Union can serve as an example for other countries.

Scottish Parliament Member William Kidd, who is a PNND Co-President said he was proud “to welcome such a famous artist, who raises awareness of the terrible dangers to humanity of nuclear weapons and nuclear testing, into the Scottish Parliament.”

“His paintings are done with such skill whilst evoking deep emotion. To hear Karipbek’s powerful statements and view his remarkable paintings was something that no one who was there will ever forget,” he added.

“We feel great support here in Scotland,” Kuyukov said in an exclusive interview for this story. “It was a pleasure to meet with the leaders of Parliament, peacekeepers and residents. The people of Scotland also do not want to have nuclear weapons, as the Clyde Naval Base is located directly 40 kilometres from Glasgow, a large and densely populated city. They do not want to have weapons either on their territory or on the territory of Great Britain as a whole.”

Kuyukov’s paintings were also on display in Manchester. While in Manchester, he participated in a seminar on the humanitarian costs and dangers of nuclear weapons in the campaign for peace organised by the Nuclear Free Local Authorities (NFLA) and the U.K. and Ireland Mayors, Provosts and Leader for Peace Chapter.

“We had a fruitful and busy trip as we visited three cities and attended many events. We have felt the support from Lord Mayor of Manchester Councillor Abid Latif Chohan and the Baroness and the leaders of various peacekeeping organisations during this trip. Manchester declared itself a nuclear-free city. According to the mayor and other peacekeepers, the city is ready to ban nuclear weapons completely,” said Kuyukov. 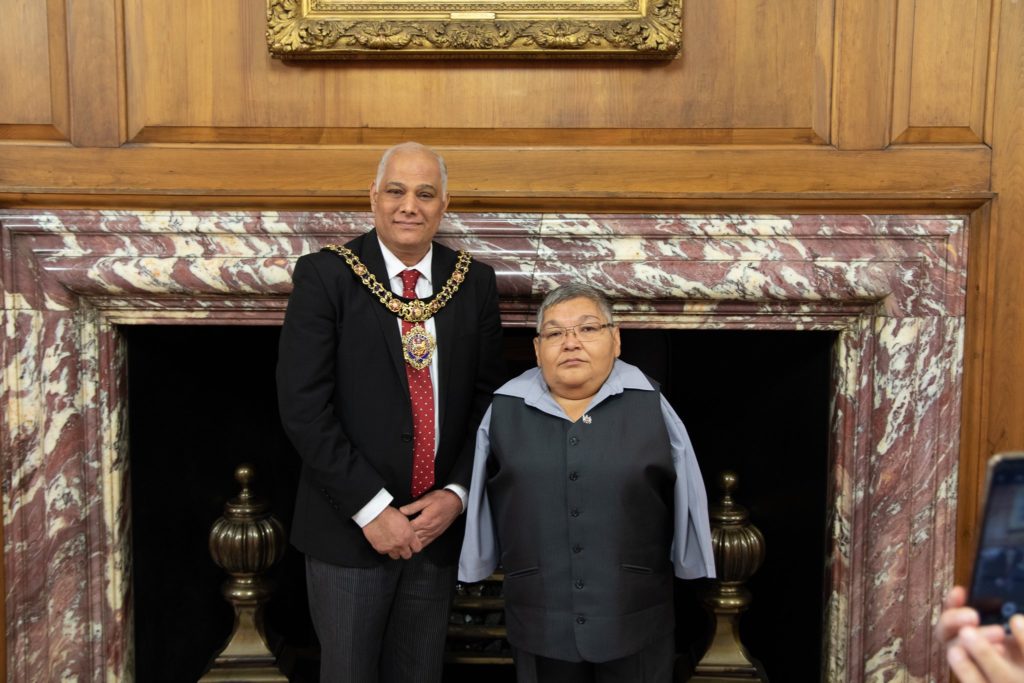 Kuyukov added he was pleased to be able to share his paintings, which depict the suffering of nuclear-weapons-testing victims.

“Pictures help me to show pain and demonstrate my vision of the world as a victim of nuclear tests and, thereby, stir emotions in people. Paintings related to the anti-nuclear movement are always of particular interest to the public,” he said.

Kuyukov presented two new paintings dedicated to the atomic bombings in Japan. The painting titled “Hiroshima” depicts a child watering a single plant after the explosion among the ruins.

An exhibition of Kuyukov’s paintings was also held at the Representative Office of the Foundation of the First President of Kazakhstan in London. The event included a screening of “Where the Wind Blew” documentary about nuclear weapons testing in Kazakhstan and the U.S.

Kuyukov’s visit to the U.K. followed the International Day against Nuclear Tests and was organised by The ATOM Project with the support of the Embassy of Kazakhstan in London and PNND.