By Diana Vassilenko in Culture on 18 September 2019

NUR-SULTAN – Capital fashion designer Nagima Kaidarova is devoted to instilling love of Kazakh culture and traditions through her ethnically-stylised clothes. 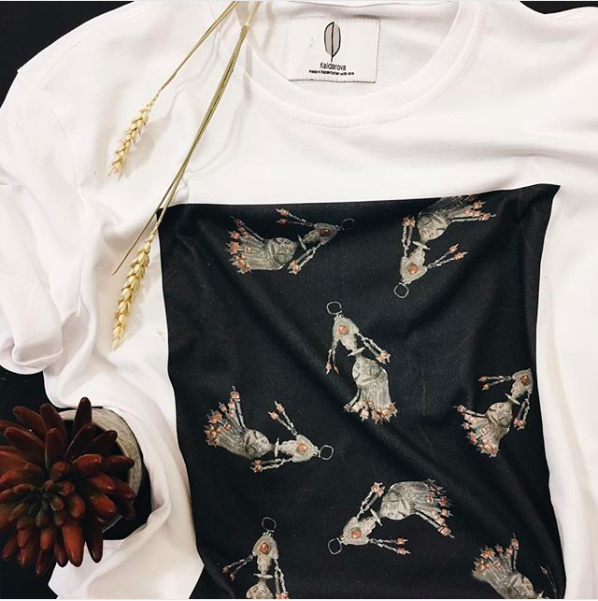 T-shirt with a print by Nastya Zharko.

Although she studied graphic design at Gumilyov Eurasian National University, Kaidarova never considered being part of the fashion industry until her last year in 2014 when most of her friends started living abroad.

“I decided to attract our Kazakh youth to our rich culture and interesting history and, being a graphical designer, I started with printed t-shirts,” she said in an interview for this article. “I want my generation to have the desire to contribute to their motherland the same way I do.” 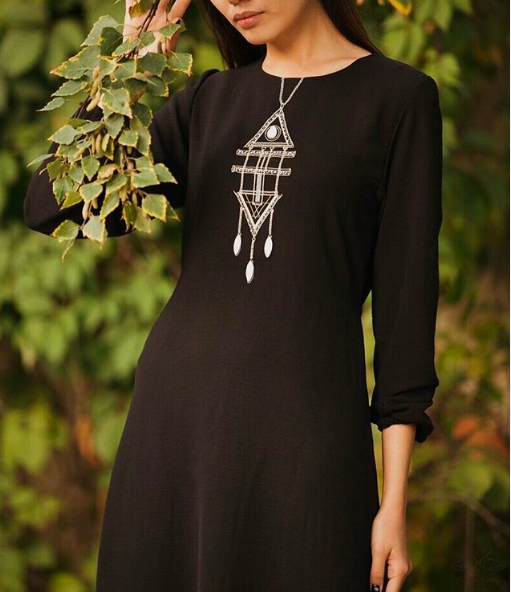 Her first creative project involved t-shirts printed with tumars. The triangular-shaped amulets made of leather or felt are very special for Kazakhs, as they are believed to protect the owner from evil, illness and misfortune.

The tumar prints were successful. Showrooms started buying them and many people ordered custom-made clothing. Kaidarova has created new collections, such as dresses and t-shirts with embroidered and printed tumars and stones and beads on certain pieces.

“For my tumar dresses, I needed to find a new fabric. This time, I wanted the dresses to be fluttery and wrinkle-free. I found a curtain store and bought some beautiful linen curtain fabric. I bet my happy customers don’t even know they’re wearing curtains!” she said.

Kaidarova supports fellow Kazakh artists and designers, preferring to wear clothing made in the country. She commissions special artwork and collaborates with local artists to make unusual pieces. When illustrator Nastya Zharko painted traditional earrings, which looked like dancing women, she printed them on her clothes.

Kaidarova is creative not only with the prints and materials, but also with fit. When designing a custom-made outfit, she uses the customer’s measurements to create a 3D model using the design programme 3D Clone. The person sees the model wearing the desired clothing and gives approval, thus ensuring proper interpretation and fit.

Kaidarova is proud of her decision to be among the first to write Kazakh words on her clothes using the Latin alphabet. She made the choice before the 2017 decree to transfer the Kazakh language from the Cyrillic to the Latin alphabet. 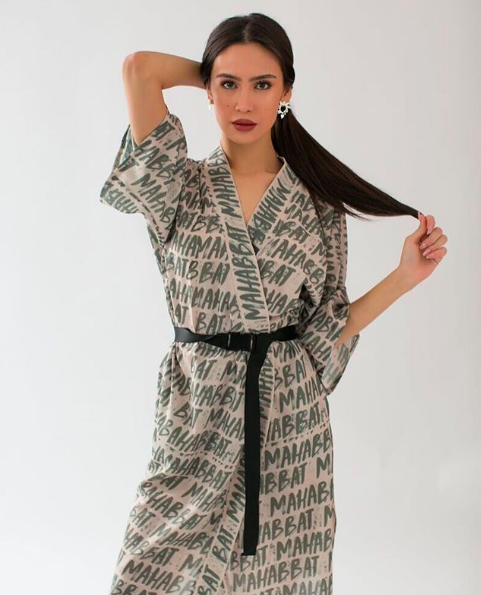 “I chose the beautiful Kazakh word ‘Mahabbat,’ which means love. The idea behind this word was that I wanted girls to be wrapped in love. That’s how the popular Mahabbat wrap-dress appeared,” she said.

Her Mahabbat t-shirts are in demand near Valentine’s Day, with both guys and girls ordering them as gifts.

Her gut feeling worked once more when creating sheer bodysuits with Massagetaean inscription tattoos, which she started printing on clothing before plans to film “Tomyris.” The historical film  tells the story of the legendary nomadic female ruler said to have reigned for 50 years over the Massagetae (the ancient nomadic tribal confederation which inhabited the steppes of Central Asia, northeast of the Caspian Sea in modern Turkmenistan, western Uzbekistan and southern Kazakhstan) and defeated and killed one of ancient Persia’s most famous rulers, Cyrus the Great. The movie, produced by KazakhFilm, will be released Sept. 27. 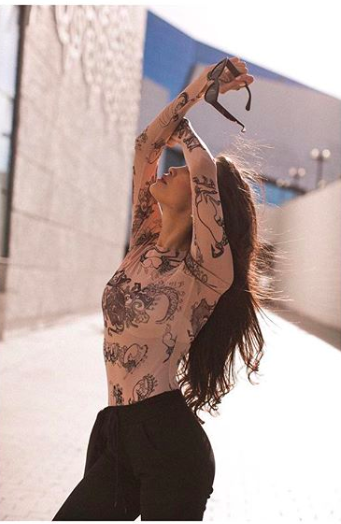 “My tattoo bodysuits were selling well and suddenly I receive a notification that I was recruited to be part of the ‘Tomyris’ cast,” said Kaidarova. “My staff apparently secretly sent the recruiters some videos of me riding a horse and that was one of the primary requirements, to be a horseback riding woman.”

Kaidarova’s interest was sparked and she decided to participate in the film. While she appears in only one episode, she will never forget the opportunity.

“It was an incredible experience. I participated in a real-life battle on horseback wearing clothing of that time. The staff taught us how to fight using Massagetaean weapons; it was really cool. I feel inspired to make more Massagetae-themed clothing now,” she said.

As the physical store is being refurbished, all purchases can currently be made online through the stores’ official Instagram @nkaidarova.