By Staff Report in Business on 21 September 2019

NUR-SULTAN – ENEVERSE KUNKUAT, a subsidiary of Singapore-based companies, launched Sept. 3 a 100 megawatt (MW) solar power plant in the Almaty region near the city of Kapshagai. The power plant will annually produce approximately 160 million kilowatts (KW) of electricity and reduce carbon dioxide emissions by 150,000 tonnes per year. 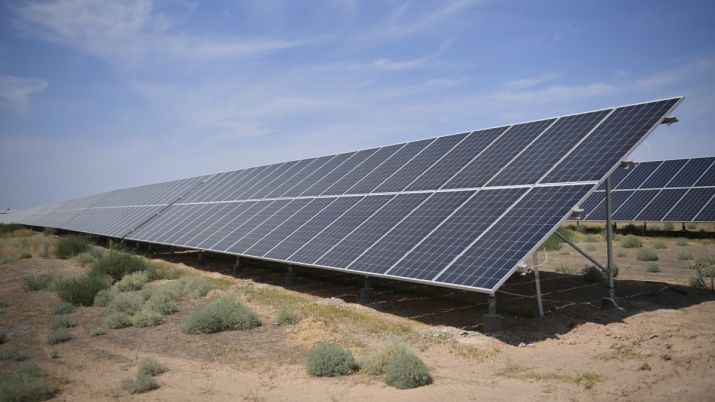 “There is a shortage of electricity in the Almaty region. Therefore, such projects are needed. I can’t even believe that such an important and large project was implemented within one year. This is a great and joyful event. EXPO 2017 has become a good impetus for the development of alternative energy projects,” said Kazakh Deputy Prime Minister Zhenis Kassymbek at the Sept. 3 grand opening of the facility, reported the Almaty Region press service.

According to Kassymbek, this solar power station will increase the share of renewable energy 3 percent by 2020 and 10 percent by 2030.

The first phase of solar power station occupies 274 hectares of land. The total area is ​​400 hectares. At full launch, the plant will have 303,000 sun panels and a 150 MW total capacity.

The project also includes a 220 KW substation and a 220 KW high-voltage line.

The power plant project cost 27.7 billion tenge (US$71 million), of which 10.4 billion tenge (US$26 million) came from investments. A part is borrowed funds from the Development Bank of Kazakhstan (DBK) and financial leasing from DBK-Leasing.

From the regional budget, the government allocated 233 million tenge (US$602,887) to build the high-voltage line as part of the Business Roadmap 2020 programme.

“The Almaty region is actively developing in all directions. Many industrial zones are opening up, new enterprises are opening up. They all need affordable electricity. Therefore, the launched solar power station is an important object that will contribute to providing the region with electricity. In addition, the implementation of this project contributed to the creation of new work places, increased tax revenues to the budget and investments in the region. All this will positively affect the economy of the region, bringing benefits to the population,” said Almaty Region Akim (Governor) Amandyk Batalov.

Kazakhstan has more than 70 alternative energy-generating facilities, of which more than 20 are located in the Almaty Region.