NUR-SULTAN – Sexual abuse must be qualified as a serious offence rather than a medium-gravity crime, Mazhilis (lower house of Parliament) deputy Nurzhan Altayev said at an Aug. 12 roundtable in Almaty, where participants agreed measures to fight sexual violence must be tightened and the law’s definition of rape refined. 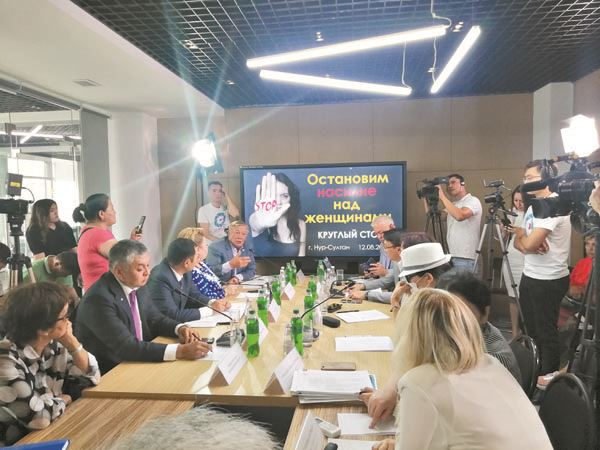 “The time has come to redefine this type of crime (sexual abuse) from moderate to serious. And, of course, our society must be consolidated and condemn this crime. The rapists should feel like outcasts, their relatives should be ashamed of them; therefore, I think their faces should be shown,” Altayev said.

He made reference to the nationally reported story of two train conductors who raped a passenger travelling from the capital to Aktobe in November 2018. The court has sentenced each of them to 30 months in prison.

“We must take charge of this. The fact that the rapists in that resonating case, where violent acts were committed against our sister on a Talgo train, received only two and a-half years in prison, is absolutely unacceptable,” he added.

NeMolchiKz (Don’t be quiet Kz), the national movement against sexual violence, has for years been highlighting the need to revise legislation concerning sexual abuse. According to NeMolchiKz, five women and two children are raped in the country each day. Deputies and ministers started supporting the movement following the gruesome train case, reported caravan.kz.

One of the sexual abuse victims hid her face at the roundtable as she spoke about the way such sensitive cases are handled. According to the victim, investigators pretended to lose her testimony about the two rapists, the criminals and their relatives stalked her near the entrance to her house and people on social media claimed she was to blame and had rigged the situation. She was forced to stand with the rapists during the psychological examination and sit opposite them in court. When she tried to turn away from them, the judge rebuked her. No one supports the victim and everyone is trying to cover up such matters as soon as possible, she said.

Human rights lawyer and activist Khalida Azhigulova noted such an attitude towards victims of violence is the result of the national educational system. All law students are required to study the commentaries in addition to the laws and codes.

“In a commentary on the Criminal Code, ‘a woman’s lack of will for sexual intimacy may be evidenced by her explicit and obviously expressed resistance.’ In the whole civilised world, it is believed that a man should receive explicit consent, but in Kazakhstan we require a woman to actively resist. ‘The violence must be so intense that it must overcome the real and not imaginary resistance of the victim’ and the author of the commentary further writes ‘Therefore, sexual intercourse cannot be recognised as rape, if the woman did not show real resistance,’” she read from the document, which must be studied by national lawyers.

The roundtable participants were astonished by the law’s interpretation of sexual abuse.

“The victim must prove that she was raped in our country, but according to international standards, it is the accused who struggle to prove themselves innocent, and psychologists support the victim from the very beginning,” Azhigulova added.

The participants agreed work must and will be done to change the commentaries and the law’s definition of sexual abuse. In addition, they agreed an important step should be made by transferring sexual violence cases from the Ministry of Internal Affairs to the Office of the Prosecutor General. Practice shows many cases cannot move from a dead point until they are transferred from the district to the region or prosecutor’s office, said Azhigulova, as local investigators often fail to find either evidence or witnesses.

NeMolchi.kz activists have been successfully facilitating the progress of many rape cases. They make sure to help sexual abuse victims and teach them how to ensure their cases are solved. Kazakh citizens may sign petitions to strengthen the law against sexual abuse using a link provided on the nemolchi.kz Instagram and Facebook pages. With the rising activity of people and now the government against sexual abuse, the trend is set in motion for the situation to change.

President Kassym-Jomart Tokayev alluded to this in mid-August, noting that in his first state-of-the-nation address Sept. 2 he will outline instructions to the government and call on Parliament to toughen punishments for crimes against individuals to preserve their dignity.