NUR-SULTAN – The Mangystau Region is promoting the Anyz Tulga (Human Legend in Kazakh) project, which recognises traditional Kazakh crafters and encourages them to teach their skills to young people to preserve ancient arts. The Council of Businesswomen of the regional Atameken Chamber of Entrepreneurs initiated the programme. 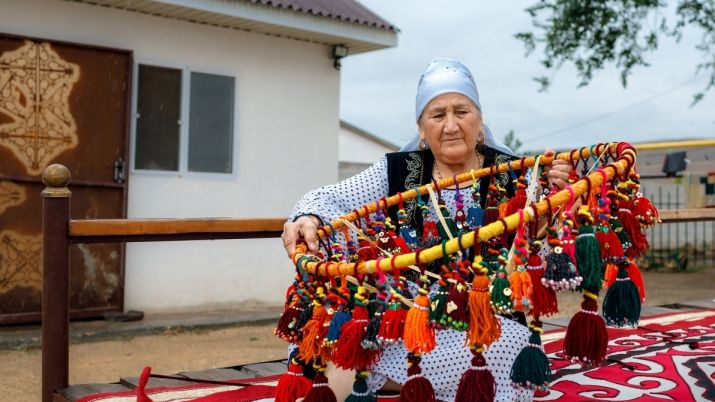 “It is vital that the yurt, which reflects our nation’s culture and identity, is passed on from generation to generation. First and foremost, however, is our own desire to do so. Currently, I am trying to pass on all my experience and skills to my daughters and my sons’ wives. I am also willing to teach anyone who is interested in this art,” said Medina Izbasarova.

Izbasarova, who holds the Altyn Alka (gold pendant in Kazakh, awarded to mothers who have given birth and raised seven or more children), is one of the few women in the western part of the country who has preserved the art of decorating yurts according to all the rules and traditions. Her example is stored in the National Museum as a unique example of Kazakh craft and is a national treasure.

Izbasarova is one of the first individuals to be included in the Anyz Tulga project. Her unique creations are recognised by the Union of Kazakh Artisans.

“We must preserve our national identity, which is directly linked to our ancient crafts. It will be sad if in 20 years, signs of our crafts remain only in museums. There is a custom in many countries for the government or some other national organisation to take people with unique crafting talents in full care in order to transfer their skills, abilities and unique technologies to potential students. I believe there are no more than 10-15 such living legends in Kazakhstan, maybe even fewer. There is a need in time to preserve the uniqueness that we still have. In my opinion, we have a maximum of five-seven years left, since all the unique masters are of advanced age. They are all at least 70 years old. I would not want to hear such words in the museums of Kazakhstan in ten years as ‘These crafts and techniques have been lost,’” said Council of Businesswomen Chairperson Saule Salikhova.

She noted the nation’s artisans need government support on all levels, including local, to ensure the region’s crafts are preserved. The Kazakh market is currently overflowing with products made by Kyrgyz artisans. Kyrgyzstan, like Uzbekistan, has adopted a national programme to support and develop its crafts.

“That is why we are promoting the Anyz Tulga project. The main goal of the project is to preserve all the production technologies of the Kazakh yurt. It is of great importance for Kazakhs. It is our genetic code. In the Mangystau Region, only four people can make native Kazakh yurts from the start of wool selection to the last stroke. Also, in order to preserve crafts and unite all craftspeople of the region in one group, in 2017 we created the Union of Artisans of the Mangystau Region Association, a part of which are all our well-known craftspeople,” said Salikhova

Auyes Saginayeva, one of the project’s motivators, is a recognised Kazakh specialist in both modern and ancient felting techniques. As head of the regional Association of Artisans, she is seeking a location for the Crafts Centre in Aktau, a joint project of the regional Chamber of Entrepreneurs and Council of Businesswomen.

The main problem in the Mangystau Region is the lack of a centre where craftspeople could create their masterpieces and give master classes. The demand for such a space is huge, not to mention the artisans themselves working in their homestead sheds.

“Foreign visitors tend to request to be taken to such centres. When they find out we do not have such places, they are dumbfounded, saying that we have so many unique crafts and traditions, why would not we want to create a place to demonstrate all of them. Few people remain who are engaged in arts and crafts. If we do not take action in these next two-three years, it will be too late. All our craftspeople are aged, most being 70 years old or more. I currently invite people and teach them modern and traditional felting techniques. Both students and art teachers from schools come with pleasure to learn. I don’t have my own workshop; I work at home,” said Saginayeva.

Kumis Kosbai creates baskurs (woven woollen stripes to decorate a yurt), which are a topic of regional legends. She learned the art of weaving the furnishings and making items from koshma (large felt mats) from her mother.

“When I was in the second grade, my mother taught me to weave a type of baskur called the ninth eye and she also taught me how to make a type of ornament that looks like a unicorn made out of 13 threads. My mother told me that if I learned how to weave patterns on a rug, it would be easier to learn the ornamental technique, which looks like a ram’s horn. That is how I learned it,” she said.

Kosbai is one of the four project candidates, as well as one of the masters who will teach those wishing to learn the craft. She and other skilled Mangystau craftswomen are willing to provide master classes for anyone from any part of the country.