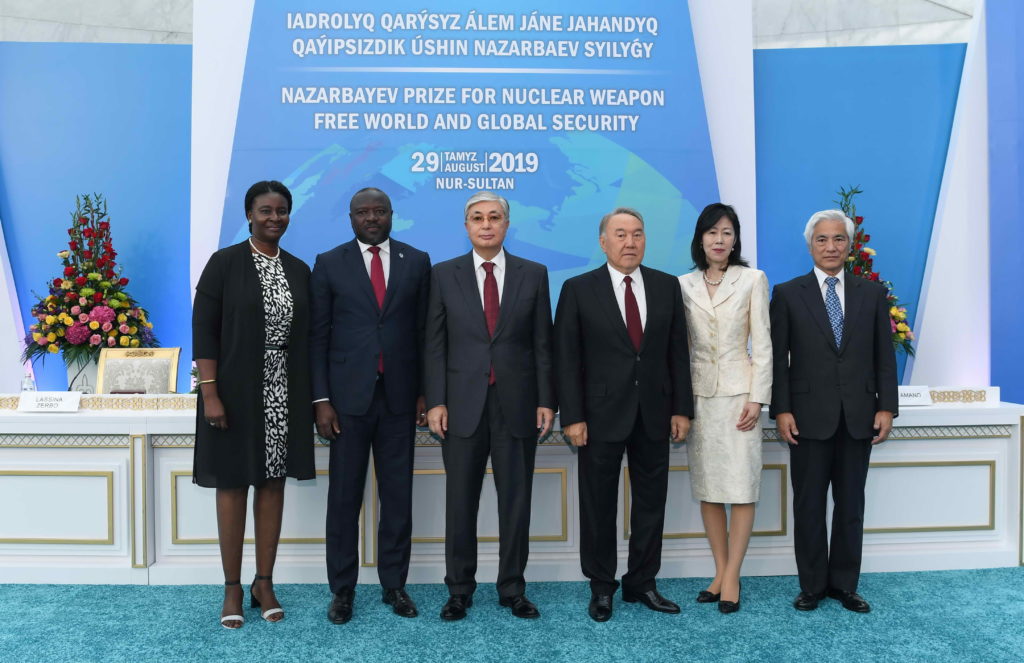 Established in 2016, the Nazarbayev Prize is awarded to prominent individuals for their contribution to nuclear disarmament and global security.

“Heading the IAEA, Yukiya Amano played a key role in the creation of the low-enriched uranium bank in Kazakhstan and contributed to the settlement of Iran’s nuclear issue. The activities and efforts of Lassina Zerbo have resulted in the near completion of the international monitoring network for the comprehensive nuclear-test-ban treaty. He also took the initiative to establish the CTBTO Group of Eminent Persons and the CTBTO Youth Group,” said Tokayev.

“This year marks the 25th anniversary since Kazakhstan signed the Treaty on the Non-Proliferation of Nuclear Weapons, our country’s membership in the IAEA as well as the 10th anniversary since the establishment of a nuclear-weapon-free zone in Central Asia,” said Tokayev. 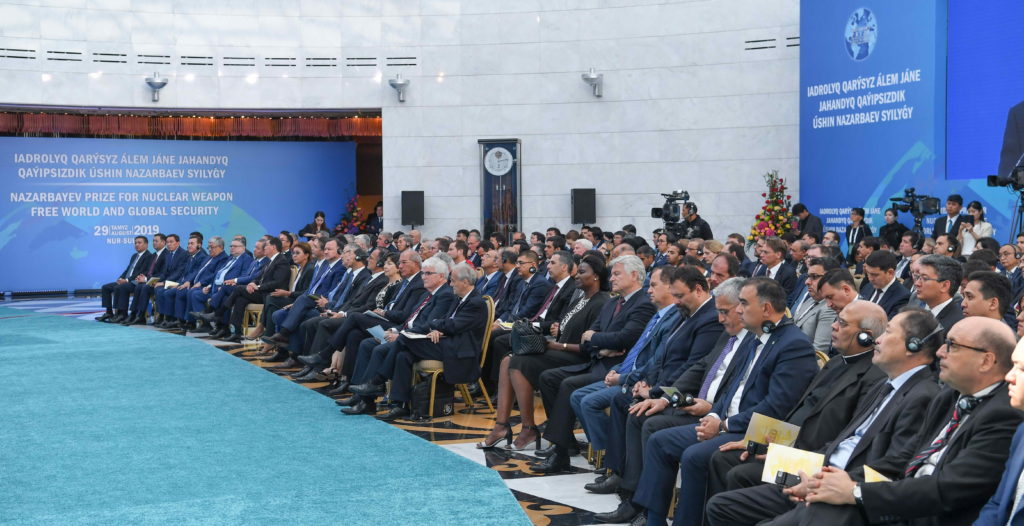 The award ceremony coincided with the Aug. 29 International Day against Nuclear Tests, which was unanimously designated by the United Nations in 2009.

The date commemorates the closure of the Semipalatinsk test site, where 456 Soviet nuclear tests were conducted over 40 years. Nearly 1.5 million people in Kazakhstan have suffered from the consequences.

Tokayev noted the decision to close the Semipalatinsk test site had “historical significance.”

“Taken against the resistance of the Soviet military elite and individual politicians, the decision of the First President Nazarbayev to close the nuclear test site required great courage and firm will. It has facilitated the entire antinuclear movement,” added Tokayev.

In turn, Nazarbayev said the escalating confrontation between the two nuclear powers, the United States and Russia, and their exit from the Intermediate-Range Nuclear Forces Treaty produced “serious negative consequences.”

“The renewed nuclear arms race, including in space, that the two countries started, is of great concern. The Intermediate-Range Nuclear Forces Treaty ceased to have effect and Kazakhstan was party to this treaty,” said Nazarbayev.

“More than 20 countries of the world keep potentially dangerous nuclear materials and each of them can become a target for destructive forces,” said Nazarbayev.

The world’s nine nuclear-armed states, he noted, do not intend to curtail their programmes. With the increasing global distrust and geopolitical confrontation, the world ushers in the unprecedentedly difficult stage.

Nazarbayev urged the gathering and the international community to take more vigorous steps towards a nuclear weapons-free world.

“We need to revise the archaic concept of strategic stability based on nuclear weapons. We need to create a new nuclear arms control system. It is important to negotiate the development of the Universal Treaty on the Reduction of Nuclear Weapons,” said Nazarbayev.

He underscored the need to introduce an effective system of legally binding negative security guarantees from the nuclear powers.

“At the same time, members of the nuclear club must commit to a package of obligations and restrictions to adjust their policies in the area of ​​weapons of mass destruction. It is first of all important that they curtail the traditional practice of maintaining and modernising nuclear facilities,” he said.

Nazarbayev said the award serves as a reminder that the future should entail a world without nuclear weapons.

In the video address to the gathering, United Nations Secretary General Antonio Guterres thanked Kazakhstan for the efforts.

“A world free of nuclear weapons, including banning on nuclear testing, remains the highest disarmament priority of the UN. Kazakhstan has been strong supporter in this task. I thank former president Nursultan Nazarbayev for his commitment to this cause and the establishment of this prize. This year’s laureates, Yukio Amano and Lassina Zerbo, richly deserve this recognition,” said Guterres.

“The international community must stress in its cooperation to achieve our collective goal – the world without nuclear weapons. I count on your support in securing our future,” he concluded.

The Kazakh capital also welcomed Aug. 28 the representatives of the nuclear-weapons-free zones of Latin America and the Caribbean, Africa, South Pacific, Central Asia and Southeast Asia for the seminar themed “Development and Strengthening of Consultation Mechanisms between Existing Nuclear-Weapon-Free zones.”

The representatives of the IAEA, the CTBTO and Mongolia also attended the event.

Mongolia declared nuclear-weapon-free status in 1992 and that was recognised internationally by the United Nations General Assembly Resolution 55/33S on “Mongolia’s International Security and Nuclear Weapon Free Status” in 2000.

The seminar participants explored the key challenges in nuclear non-proliferation and capacity building, ways to strengthen cooperation and the role of nuclear-weapon-free zones in the broader effort to promote nuclear disarmament and non-proliferation. They also reviewed proposals to institutionalise the inter-zonal cooperation between the zones and efforts to expand the geography of the zones.

The seminar was organised in partnership with the United Nations Office for Disarmament Affairs (UNODA) and is part of the preparation work to the Fourth Conference of the State Parties to Nuclear-Weapon-Free Zones scheduled for April 24, 2020 in New York.