By Nazira Kozhanova in Sports on 20 August 2019 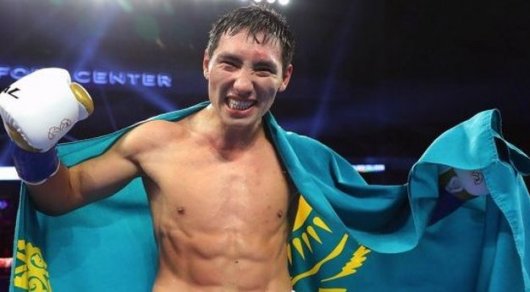 “Training camp was wonderful. My coach Buddy McGirt prepared me very well, in the spirit of the old school. We had excellent sparring and went to the match 100 percent ready. I have been in the United States for a year now and have become stronger. I want to win all the middleweight belts. Who would I like to fight with? There are a lot of good fighters in the middleweight: Canelo, Andrade, Charlo… I am ready and want to fight the top boxers,” said Alimkhanuly after the fight, reports the Top Rank website.

Alimkhanuly originally gained the titles after defeating Cristian Olivas in April. Alimkhanuly defeated McLellan by technical knockout in the fifth round at the Bank of California Los Angeles stadium.

The win was Alimkhanuly’s seventh out of seven fights in his professional career. Alimkhanuly also had a successful amateur career, winning the 2013 World Boxing Championship.

The fight between Alimkhanuly and McLellan received additional attention from the media with McLellan posting a picture of Alimkhanuly as a Sacha Baron Cohen’s Borat character on his Instagram page. Later McLellan also posted an apology, reports the Canadian Boxiana website.

“I apologise to the Kazakhstan fans. I did not know they took such offence to Borat. I sincerely apologise to you. I merely wanted to offend my opponent not the entire country,” wrote McLellan on his Facebook page.