By Diana Vassilenko in Culture on 12 August 2019 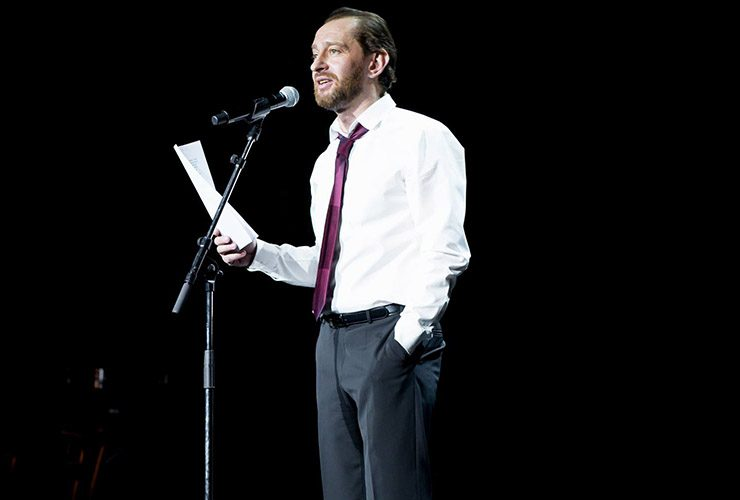 The evening’s programme is called Best & Seller and is part of the Bezprintsipnye Chteniya (No Principles Readings) Project, which involves prominent actors and writers reading modern Russian literature on stage.

“Alexander Tsypkin’s story collection presents a wonderful chance to understand today’s Russia from within. It comprises a multitude of diverse stories, which are amazing, juicy and always kind. One can trace this young author’s lineage to de la Fontaine’s fables, Balzac’s ‘Human Comedy’ and the wit of Sacha Guitry who, too, was born in St. Petersburg. This one is a very contemporary and very Russian book that reminds us that Russians can and love laughing, first of all, at themselves,” said former adviser to the President of France Jacques Chirac, Director of the French Institute in St. Petersburg and Cultural Attaché of the French Embassy in Russia Héléna Perroud in her review on Tsypkin’s first and immediately bestselling short story collection “Long Live Die-hard Women.”

The Best & Seller programme is part of the No Principles Readings project developed by Tsypkin in 2015 with Russian producer Anastasia Prits. Maxim magazine editor-in-chief Alexander Malenkov and Russian Booker laureate Alexander Snegirev also participated in the development of the project.

The works of the three founding writers of the project, as well as of Narine Abgaryan, Marina Stepnova, Andrei Astvatsaturov, Masha Traub, Sasha Filipenko and several other authors, have been read since the start of the project. The project aims to promote contemporary Russian literature in Russia as well as abroad.

Tsypkin’s stories have been read by some of Russia’s leading actors, such as Ingeborga Dapkunaite, Konstantin Khabenskiy, Danila Kozlovsky and Anna Mikhalkova. Khabenskiy is known as a versatile actor both on stage and on the screen. He started his career as a stage actor and became popular all over Russia after starring in TV series and more than 50 films. That success led to Khabenskiy being one of the best-known Russian actors abroad.

Best & Seller is the third reading performance programme by Khabenskiy and Tsypkin. The first two were “Long Live Die-hard Women,” and “The House of Goodbyes.”

Tsypkin and Khabenskiy have travelled to more than 10 countries with their first programme named after Tsypkin’s first book “Long Live Die-hard Women.” All three performances took place more than a hundred times in Russia, Germany, Switzerland, Israel, the United States and Canada, with all shows being sold out.

Tickets for the show can be purchased at astanaballet.com.