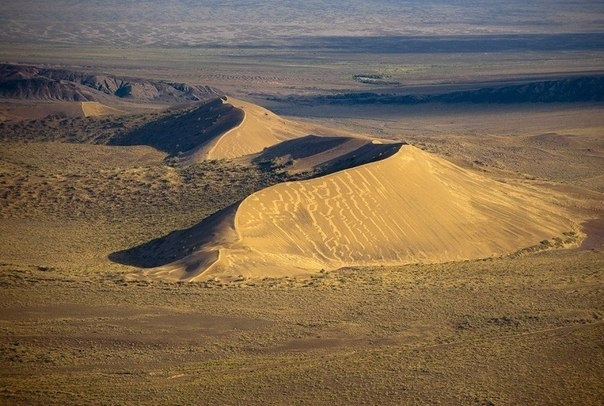 The dune, approximately 150 metres high, rises in the desert near the Ile River between the two ridges of the Jongar Alatau, Kysty Kalkan and Ulken Kalkan mountains. It stretches for nearly three kilometres and is the only dune in the rocky desert covered with saxaul and small shrubs, which makes one wonder how it was formed and why it has not been blown away by the steppe’s wind, reported tengrinews.kz.

Akkum Kalkan was created as a result of the strong Shilik wind that blows towards the Kysty Kalkan and Ulken Kalkan ridges. The gust brings dust clouds from the shallow Ile River. As it reaches the ridges, it weakens and the sand settles between them, forming the dune. Unlike other dunes, the millennium-long process causes the sand mountain to stay firmly in place, despite the unsteadiness of the sand and wind, allowing it to gain such impressive dimensions.

From the top of the dune, one can see the stunning views of the Ile Valley to the south and blue-purple ridges of the Jongar Alatau to the north. Tourists can slide down from the crest and listen to the mystical sounds.

During dry weather, the dune makes a variety of organ-like sounds when the sand grains rub against each other, electrify and vibrate. The more sand moves, the greater the friction and louder the tones.

Although the sounds’ origins have recently been explained scientifically, several legends still exist. According to some tales, the sound comes from a huge dragon sleeping and snoring under the dune or desert spirits hiding within it. The most widespread and oldest legend says the dune is a sleeping devil turned into sand for his sins. When wind or people disturb his dream, he groans.

Travellers can reach Akkum Kalkan using tourism agencies, which have weekend tours with a guide to Altyn Emel National Park, or drive the approximately 300 kilometres from Almaty themselves.

Choosing the latter option, one should use the Almaty-Kapshagai Highway through Kapshagai, Shengeldy village and the Arkharly mountain pass to Sary-Ozek. A right turn along the road ring to Zharkent, passing the Altyn Emel mountain pass and turning off the highway to the right to Basshi village, takes the driver to the park’s central manor.

Permits are required to enter the national park territory, which can be purchased in its Almaty office or central manor in Basshi. Tourism agencies can also assist in procuring them.

An escort is also important in Altyn Emel, as the territory is huge, making it easy to get lost or to be mistaken for poachers. The guide can talk about and show many interesting things that tourists might not notice along the way, which is also an advantage.