NUR-SULTAN – SCAT Airlines will launch a direct Nur-Sultan – Tokyo flight July 6, Capital Day in Kazakhstan. The flight, taking approximately seven hours to Tokyo and eight hours back, will leave every Saturday from the Kazakh capital. 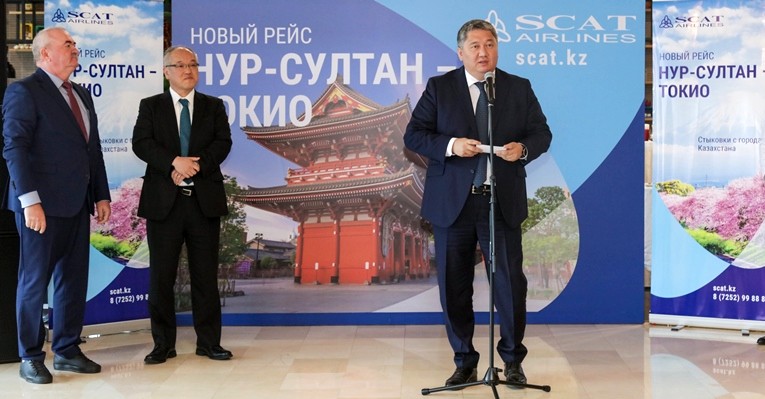 The cost of the round-trip flight is approximately 200,000 tenge (US$519.40). The Kazakh government is subsidising the fee with 1.4 billion tenge (US$3.6 million) this year to enhance commercialisation.

“I want to congratulate you all on the opening of the direct Nur-Sultan – Tokyo flight. This became possible in accordance with the instructions of the First President Nursultan Nazarbayev. Kazakhstan and Japan, as you know, have long-standing friendly, economic and social ties… In all cases, when direct flights open between countries, this always contributes to the intensive growth of all aspects of relations between them,” said Civil Aviation Committee Chair Talgat Lastayev at the July 3 presentation.

He stressed opening the direction will contribute to developing the Astana International Financial Centre, as the committee “puts in priority connections with large financial centres, one of which is in the Tokyo metropolis.” The committee plans to open similar direct flights to Singapore and Shanghai.

“I think that as a result of this work we should get a connection with all major cities that are within reach, seven-eight hours of flight. This is the goal that was set for us and what we are working on,” he said.

“We have been waiting for this flight for a long time. We are not only diplomats, but also businesspeople, leaders of different countries… Of course, this brings our countries closer, encourages friendly exchange, business and scientific exchange. Thank you for that,” he said.

He noted the first flight will also coincide with a celebration for his country, known in Japan as Tanabata (the Star Festival).

“The plane will take off from Nur-Sultan July 6 and will arrive in Tokyo July 7. This day, July 7, is a special day for us (the Japanese), Tanabata or Star Festival. There are two stars in the sky, Hikoboshi and Orihime; they personify a couple and they meet once a year… Those passengers who take this flight will witness this meeting. This is a symbol of happiness for us. Therefore, I believe that your flight will be successful and passengers on this flight will receive good luck for the whole year,” said Kasai.

SCAT Vice President Vladimir Sytnik thanked the state institutions and the embassy for their support in organising the flight.

“I think it is significant. Moreover, this flight opens on the Day of the Capital, as Mr. Ambassador said; in Japan it is also a holiday,” he noted. “We will do everything to make this flight for passengers pass quickly.”

The frequency is expected to increase to two times a week in August. Air Astana, which was initially announced as flight’s operator, is undertaking the required procedures to provide the direct flight in the future, said Lastayev.