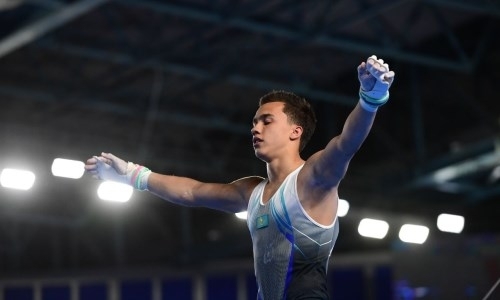 In the crossbar exercises competition final, Karimi finished second with a score of 14.675. The winner of the competition was Chia-Hung Tangu from Taiwan, Ivan Stretovich from Russia won bronze. Earlier Karimi took fifth place in the all-around competition, seventh in the floor exercise competition and fourth in the competition on the uneven bars. Karimi shared his excitement over winning the silver medal with Olympic.kz.

“Honestly, I can’t believe that I took second place. Emotions overwhelm me! I put myself together, really put myself together to perform well in this final and I didn’t pay attention to anything else,” Karimi said. He also shared his plans on the World Cup preparation, as the Olympic spots for Kazakhstan will depend on its result.

“Five days of rest and back to the battle again! We will be preparing for the World Cup, where spots for the Olympic Games will be distributed. I will adjust the programme, I will try to add complexity on the horse and the rings,” said Karimi.

Kurbanov also won silver at the Universiade. His final performance was estimated by the judges at 14.7 points. Chin-Kal Li from Taipei won the gold in this competition. Kazumaya Kaya from Japan received bronze. Karimi told Olympic.kz his medal was an unexpected result, as his form was in decline after the last World Championship.

“I’m so glad, I’m happy. After the last year’s World Championship, I had absolutely no results, there was a decline in form,” said Kurbanov.

The Universiade is an international multi-sport event, organised for university athletes by the International University Sports Federation (FISU). This year’s Universiade takes place in Naples, Italy between 3 and 14 July.