NUR-SULTAN – The Nur-Sultan Duathlon 2019 was held in the Kazakh capital June 23. About 500 people took part in this event. 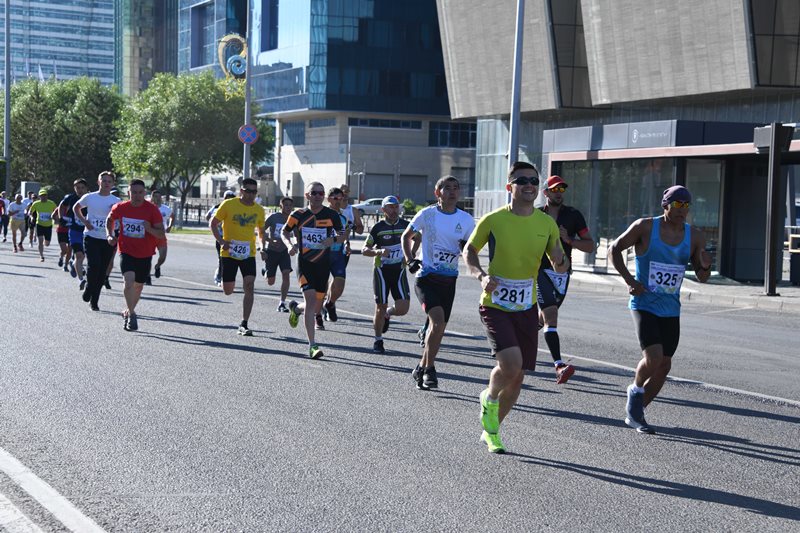 The competition consisted of a five-kilometre run, followed by a 20-kilometre cycling race and another 2.5-kilometre run. The route of the race went through Kunayev Street, Kabanbai Batyr Avenue, Akmeshit Street, Dostyk Street and Mangilik El Avenue. The bike segment also started from Kunayev Street, then continued along Turan Avenue to the Star of Astana monument, where participants turned around and continued along Turan Avenue to Dostyk Street, ending with a ride along Mangilik El Avenue to Kunayev Street to finish. Men and women were divided into four age categories: 16 to 29 years old, 30 to 39 years old, 40 to 49 years old and 50 and older.

The first participant finished 57 minutes after the start. With a large margin between him and his nearest rival, Mark Starostin was the absolute winner of the duathlon.

“I am a master of sports of international class in ski racing. It is the first time that I’ve participated in this kind of competition. My participation today is a preparation for the upcoming Ironman triathlon. We are lucky with the weather. Organisation is at a fairly good level,” the winner said at the finish.

Daria Starostina, Mark’s sister, was the absolute champion among women.

“Our dad and mom are masters of sports in skiing. It has been 15 years since I left major sport, but I train for myself. Today I decided to participate in the sports life of our city. I did not [try to keep a certain pace], I ran according to my state of health,” said Starostina.

Vsevolod Yevchenko, another participant, also made the duathlon a family event.

“I participated with my brother and my dad. Our dad has taken a place. My current achievement is that I have won over myself. The hardest thing is to start,” said Yevchenko.

According to the results of the competition, the top three men in the 16 to 29 group were winner Alimzhan Baltabek followed by Dmitry Adamovich and Dmitry Inkin. Among women in that group, the winner was Ekaterina Brynza, with Dinara Kaparova in second and Ekaterina Brynza third.

Arman Galimov was the winner among men 30 to 39, followed by Yevgeny Leontyev and Sergey Prokhorov. On top of the women was Gulmira Amenova, trailed by Elena Ponomareva and Elmira Moldasheva.

Rinat Salikzhanov took the gold in the 50 and over group, followed by Mendybai Alimgazinov and Marat Alimzhanov. Among women, first place went to Tatyana Mikhaleva, second to Irina Mustafina.

All the winners were given prizes. By tradition, at the end of the competition, five bicycles were played out among the participants of the duathlon.