By Elya Altynsarina in International on 9 July 2019 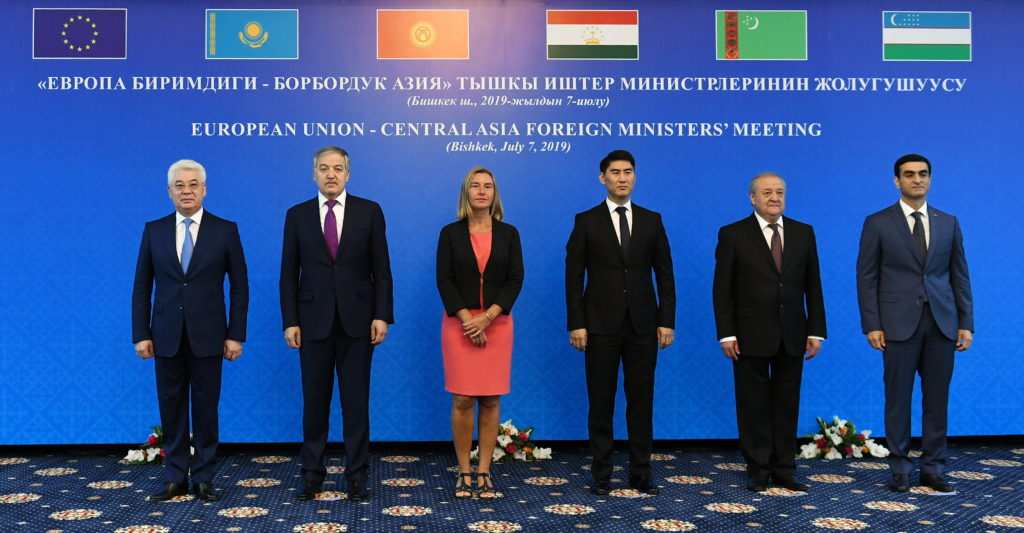 In addition to the existing $1.12 billion bilateral and regional assistance for the period 2014-2020, programmes within those worth $80.7 billion, the amount available for the overall international development assistance by the EU to the world, will also benefit sustainable development, economic empowerment, anti-terrorism efforts, education, and intra-regional trade in Central Asia and Afghanistan.

“Kazakhstan stands for the effective use of the tools of EU-Central Asia relations as the new EU strategy takes effect, and it calls for ensuring the integrity, visualisation and visual perception of EU-CA cooperation,” said Foreign Minister of Kazakhstan Beibut Atamkulov at the 15th EU-Central Asia Ministerial on July 7.

He said he was pleased Kazakhstan’s proposals on women entrepreneurship, small- and medium-sized businesses, transport and logistics infrastructure, energy efficiency, environmental protection, combating climate change, and rational use of water resources, education and digitisation were reflected in the document. 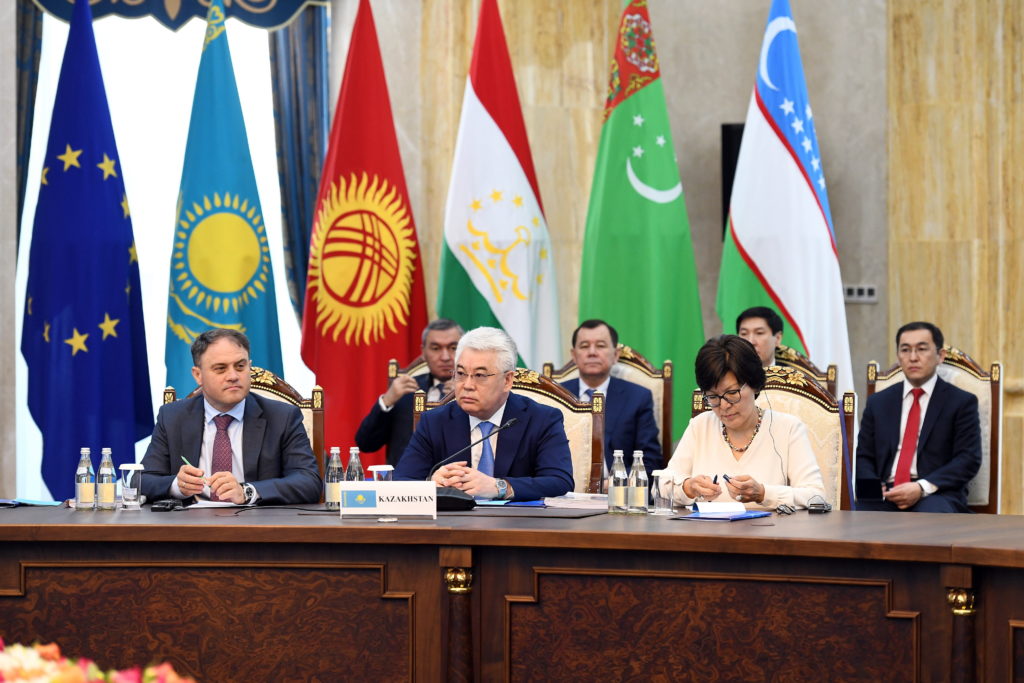 Earlier in its statement, the Kazakh Ministry of Foreign Affairs welcomed the decision by the European Council to adopt the strategy and noted that Kazakhstan equally shares the conceptual foundations of the document where “sustainability” and “prosperity” are given a special importance. The country sees the new strategy as a potential for bringing EU-CA relations to a new level, according to the ministry’s statement.

The European Union is Kazakhstan’s number one trading and investment partner with 50.6 percent of foreign trade occurring with EU member states. According to the National Bank of Kazakhstan, 48 percent of the accumulated foreign capital in Kazakhstan originates from the European Union; mutual trade in 2018 grew 23 percent from 2017, reaching $37 billion (exports – $31 billion, imports – $6.7).

Among the proposals tabled by Kazakhstan were the use the Investment Facility for Central Asia (IFCA) and European Investment Bank for financing projects in the region, as well as launching a virtual platform to increase public awareness of the EU-CA partnership.

Atamkulov noted the importance of the EU’s decision to bring back the bilateral projects, as well as the possibility of implementing joint EU-Central Asia programmes with other Central Asian states.

For instance, the EU’s 2-million-euro ($2.24 million) funding will be implemented jointly with Kazakhstan and Uzbekistan to provide Afghan women with the education necessary for economic empowerment.

“The positive regional dynamics in Central Asia and a demand for closer cooperation with the European Union present a significant opportunity for a closer, stronger partnership,” said Mogherini. “We are ready to build on the enormous momentum gained over the last five years, as a consistent and reliable partner, to foster resilience, prosperity and regional cooperation.” 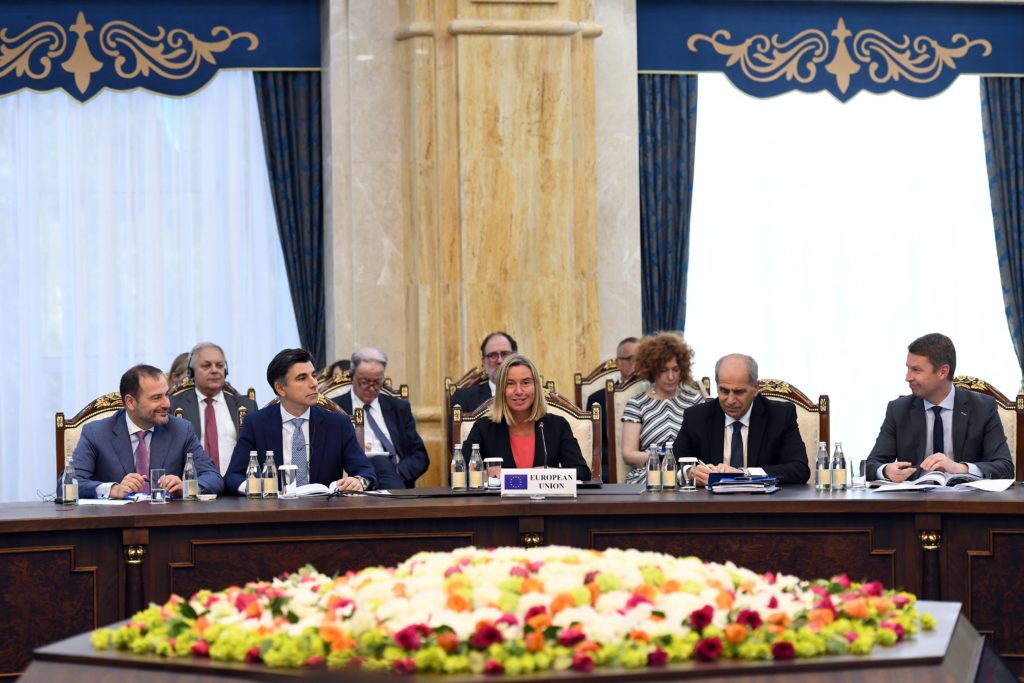 To reaffirm their commitment to “a strong, diversified and forward-looking partnership that builds upon the positive dynamics underway in Central Asia and the strong mutual interests between the two regions,” the parties adopted a joint communiqué called “The EU and Central Asia: Forging a Stronger Partnership Together.”

In it, Central Asia and the EU also agreed to work together for peace, security, human rights, democracy and sustainable development in full respect for international law.

The communique commended the role of EU High Representative Mogherini in strengthening relations between EU and Central Asia during her tenure.

A day prior to the ministerial meeting, the first EU-Central Asia Forum took place in Bishkek. The meeting was meant to bring together ideas from members of civil society, think-tanks, youth and business leaders. Regional foreign ministers praised the meeting.

Mogherini called the forum a key opportunity for the societies of the EU and Central Asia to contribute to a new phase in the partnership between the two regions.

“We want to build stronger ties among us, this is not only an institutional exercise. This is first and foremost a societal exercise, a people exercise; we also believe in the economic potential of this region; to fulfil it, there is the need for something more than some big infrastructure projects that run through these countries. There is a need to have real, long-term investments that bring benefits to local communities, and with sustainable and long-standing perspectives,” said the EU high representative.

The new EU Strategy on Central Asia is in line with the EU Strategy on Connecting Europe and Asia and the EU’s vision for a strategy to better connect the two big regions.

In the meantime, as underlined in the joint communiqué, the Enhanced Partnership and Cooperation Agreements remain a cornerstone of relations between the EU and Central Asian countries. Kazakhstan signed and ratified such an agreement with the EU in 2015 and 2016 respectively, while Kyrgyzstan initialled such a document on July 6 and Uzbekistan is in the process of negotiating a similar agreement.

The next EU-Central Asia ministerial is planned for 2020 in Brussels.