NUR-SULTAN – Bozzhyra is a picturesque tract on the Mangystau Region’s Ustyurt Plateau, decorated with chalk mountains that visitors call “sugar castles.” The most famous are the 200-metre tall outcrops resembling two fangs and the dazzling white landscapes are reminiscent of Monument Valley in Arizona in the U.S. 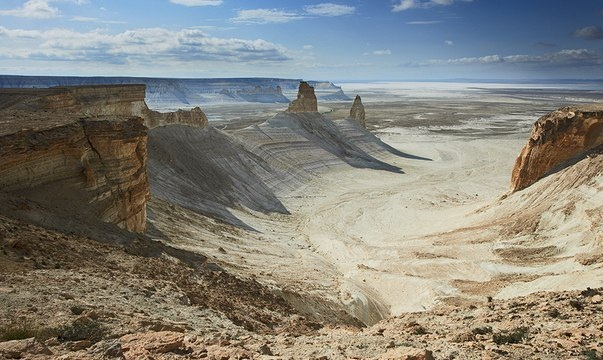 The tract measures 17 kilometres north to south and 11 kilometres east to west and the huge area requires more than one day to become acquainted with it. Although the spot is still little known and difficult for tourists to reach, travellers are attracted by its fascinating landscapes.

On the north, Bozzhyra borders Zhosaly Hill, reaching 268 metres above sea level. On the southwest, it abuts the Baisara tract. Its western boundary ends with the Ustyurt Plateau cliff and the southern side with Karashek sor (solonchak), reported silkadv.com.

Traveling around Bozzhyra usually consists of two parts – car trips and hiking. The distance from Zhanaozen to Bozzhyra is 148 kilometres; from Aktau, 298 kilometres. The Beket Ata Necropolis – Zhanaozen Road is approximately 20 kilometres from the tract.

The most famous point is the foot of the fangs, where travellers paved the road. It is a convenient spot to pitch a tent camp and walk to different parts of the valley.

Hiking trails range from five-eight kilometres and the local terrain, although rugged, does not require special mountain training. Visitors only need to use caution when climbing and descending the chalk slopes. The only unpleasant feature of Bozzhyra might be frequent strong winds, which may rise suddenly and from which it is impossible to hide.

The car route is connected with the exit through Zhosaly Hill to the edge of the plateau, which can be reached from Beket Ata Necropolis – Zhanaozen Road. Arans (ancient hunting structures made of stones for the corral of wild animals) can be found at almost every stop.