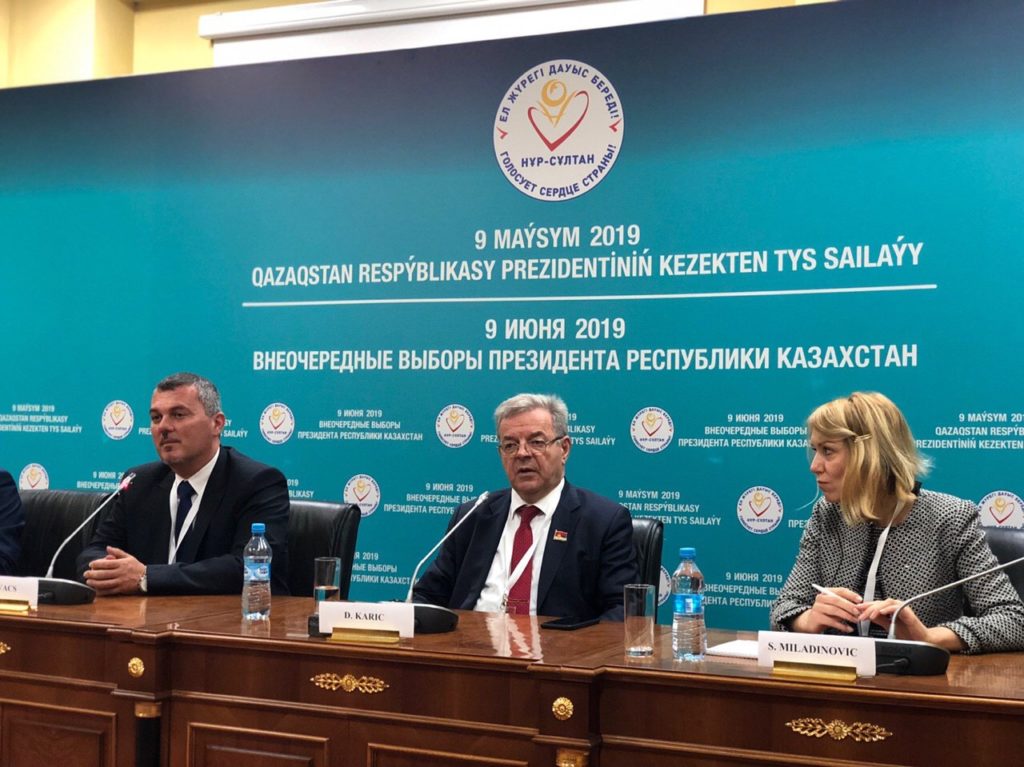 Ambassador Urszula Gacek, who heads the Election Observation Mission of the Office for Democratic Institutions and Human Rights (ODIHR) of the Organisation for Security and Cooperation in Europe (OSCE), said that about 340 observers have observed voting throughout the country on election day.

“The observers come from 40 countries, 40 participating states of the OSCE. All the information that we gather, this is very standard, everyone fills a set of forms from every polling station they visit. We are getting information coming from our observers throughout the country, but only by the end of the day will we have a complete statistically significant sample that we use for our press conference tomorrow,” Gacek said at the polling station number 143 in Nur-Sultan.

The observes ask about the composition of the polling station commission, how many women are there, for example, then they check whether all the procedures are being followed for a voter identification, whether anyone has been prohibited from voting and, if so, for what reason. It takes a minimum of 40 minutes at every polling station to go through all the questions.

“This my first mission [in Kazakhstan], but for the organisation this is the tenth mission. Previous missions made recommendations to the government and important part of our work is to see if they have been implemented,” she said.

As a head of similar missions, Gacek has been in Armenia, Cyprus and Turkmenistan.

“We do not compare country to country. We just see whether each country, participating state of the OSCE, which makes certain commitment when it joins the organisation, are they meeting those commitments and other international standards. That is the methodology we use,” she added.

Former Vice Prime Minister of Poland Janusz Walenty Piechocinski noted that the election opens up a new phase of nation building for Kazakhstan. No breaches of election law were identified so far, he said.

“This is a historical event. We are honoured to be international observers. Poland and Kazakhstan have good relations. Kazakhstan is an important partner for us. We are glad to see a lot of young people who think about their future, come and give their votes. Election is not an individual choice of the President, but the choice of a programme,” he said.

His delegation visited several headquarters and met with candidates. He said that most importantly “we could choose for ourselves which polling station we should go to.”

Former Deputy of the Seimas of Poland Tadeusz Iwinski said that he is also interested in this election as a political scientist. “What is happening in Kazakhstan is an interesting experiment to regulate stabilisation processes,” he added.

Deputy of the State Assembly (Parliament) of Hungary Sandor Kovacs, who served as an observer in Kazakhstan for the third time, said that the current vote is held in “festive mood.”

“I visited polling stations. The organisation is good. Everything is carried out in accordance with European standards. People come to vote and no violations were recorded,” he said.

Member of the National Assemble of Serbia (Parliament) Stefana Miladinovic also noted that everything is passing according to the law and international procedures and hopes “people of Kazakhstan will elect the best of seven candidates.”

Dragomir Karic, member of the Parliament of Serbia, said that First President Nursultan Nazarbayev contributed to the country’s major achievements.

“We were able to visit several polling stations in the morning. We are not inspectors, but people of good will. If we notice any violations, we must pay attention to these facts. Kazakhstan can serve as a good example in terms of organisation for other countries. We noticed that many people come with their families. We are glad that there is a woman among the candidates. Perhaps, there will be 30 candidates and among them 20 women and 10 men in the future such as in Serbia,” he said.