Kazakh President flies to Arys after deadly explosion at weapons depot, pledges full support to residents and restoration of town

By Dilshat Zhussupova in Nation on 25 June 2019

NUR-SULTAN – Kazakh President Kassym-Jomart Tokayev visited the town of Arys June 24 shortly after an explosion at an ammunition depot on the same day killed two, injured dozens and resulted in the evacuation of tens of thousands of city residents. 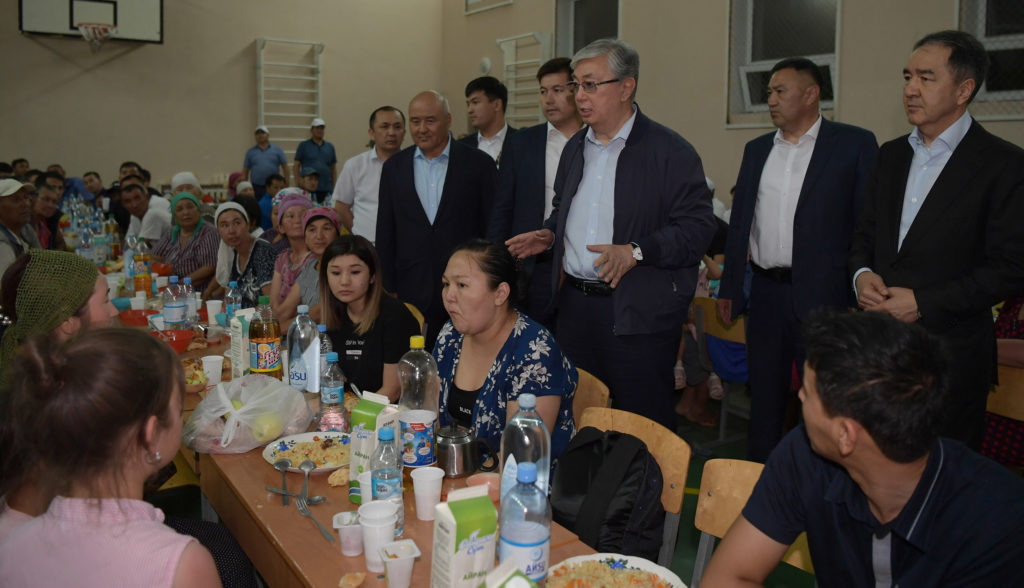 The explosion occurred on a military base just outside of Arys. The explosion sent debris flying, which damaged nearby private property and ignited additional fires nearby. No additional explosions have been reported in the city itself, but all 44,000 residents were evacuated as a precaution. At press time, no cause for the explosion has been determined and no date had been announced for the return of the evacuated residents. 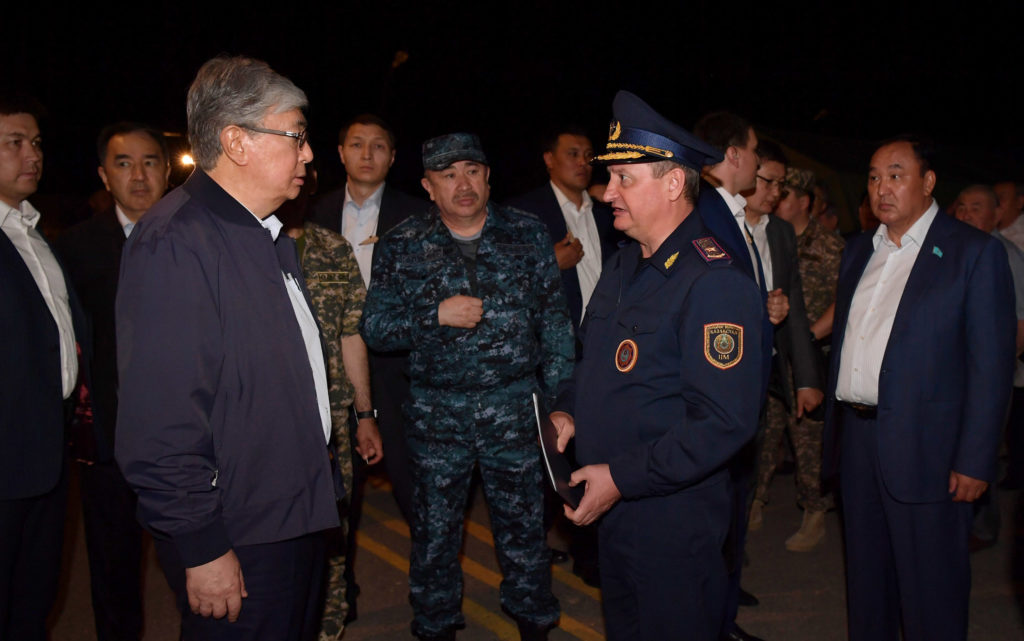 The President instructed during his visit the ministers of defence and internal affairs to work with local authorities to extinguish the remaining fires at and near the depot.

The explosion and resulting fires at the depot began at 9:20 a.m. June 24 near the town of Arys, approximately 100 kilometres from Shymkent, and continued through mid-day June 25, reports the Kazakh Ministry of Internal Affairs’ Emergency Situations Committee. Approximately 44,000 people in Arys were evacuated by 51 emergency crews, 75 special vehicles and 105 vehicle units.

A state of emergency in the region was declared by Turkestan Region Akim (Governor) Umirzak Shukeyev immediately after the explosions began.

“A criminal investigation on the incident was opened. The perpetrators will be prosecuted under the law,” the President wrote in an early morning tweet on June 25 after attending a meeting on addressing the aftermath of the explosions, visiting an evacuation point and surveying the town and people’s temporary accommodation.

Arys will be cleared of all explosive devices, said Tokayev during his visit to the evacuation point while pledging his and the Government’s full support to the residents and the town.

The Kazakh Ministry of Defence has also formed a commission to investigate the cause of the explosions.

No reports were available at press time concerning exactly how many private homes near the depot were damaged or the extent of damage to other government facilities and infrastructure near the depot. Vladimir Bekker, Chairman of the Emergency Situations Committee, announced however that out of 7,600 houses in the town, approximately 80-90 percent sustained damage of one degree or another, ranging mostly from shattered glass to more serious damage to roofs.

“All citizens of our country are concerned about the state of the inhabitants of Arys and are providing all possible assistance. I urge everyone to support the initiative of the Nur Otan Party to raise funds to assist people in Arys,” Mamin said. 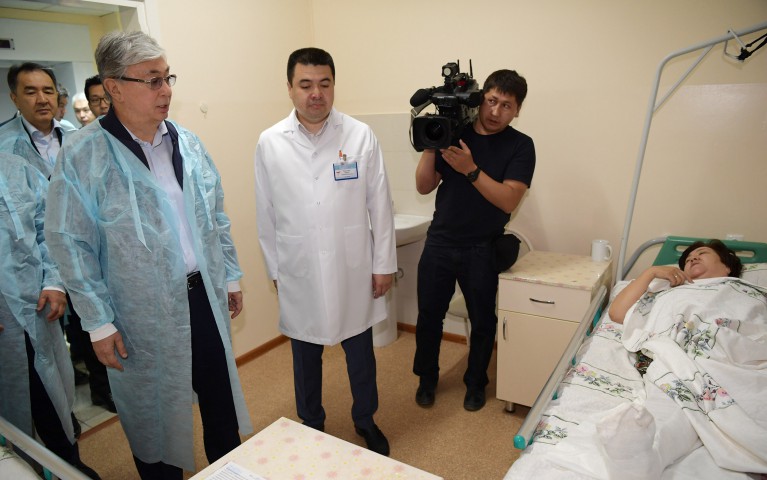 Two people died from the explosions at the depot.

“Unfortunately, one civilian (from Arys) and one soldier (from a military unit) are dead. I express my sincere condolences to their families and friends,” he noted.

The Kazakh Ministry of Healthcare reported June 25 that 165 people received medical assistance. Among the 89 people that were hospitalised, there were five mothers, 13 pregnant women and 18 children, and 37 and 52 people were from the Turkestan Region and Shymkent, respectively.

“The Kazakh Ministry of Healthcare and local authorities are making every possible effort to provide the necessary medical care to victims of the emergency situation,” the ministry’s press service stated.

Children who went missing amid the evacuations were gathered in the Taukekhan High School, and their photos were distributed on the Turkestan Region Akimat’s (administration) official website, Turkestan Region Akim Advisor Saken Kalkamanov wrote in a June 24 Facebook post.

“Our people are known for being ready to support each other in difficult times,” Pavlodar Region Akim Bolat Bakauov wrote in a June 24 Instagram post.

“When an emergency situation occurred in Arys in the Turkestan Region, we cannot stand aside because this is a common tragedy among all people in Kazakhstan. The Pavlodar Region is ready to accept 300 children from Arys to their summer camps and take care of them. #АрысБiзБiргемiз,” he wrote, using the hashtag meaning We Are United with Arys.

Throughout the day on June 25, both President Tokayev and First President Nursultan Nazarbayev, as well as numerous government institutions ranging from the Presidential Administration, the Senate and the Majilis of the Parliament to the ministries of foreign affairs, culture and sports and others announced they were transferring their one-day salaries to help the victims of the explosions in Arys.