NUR-SULTAN – Kazakh athletes Sofya Berultseva, Darkhan Assadilov and Kaisar Alpysbai were among the winners at the June 7-9 Karate 1 Premiere League main series in Shanghai, proving the country’s right to be among the strongest athletes in the world. Winning a gold medal, Assadilov became a candidate for the World Karate Federation’s (WKF) Grand Winner title.

In the semifinals, Japan’s Ayumi Uekusa, a world champion among adults, took the first point one and a half minutes into the fight. Seven seconds before the end, with Ukeusa leading 3-2, Berultseva made the last spurt, which at first was supported by only one judge. After the Kazakh coach protested and video replay reviewed, Berultseva was named the 5-3 winner. 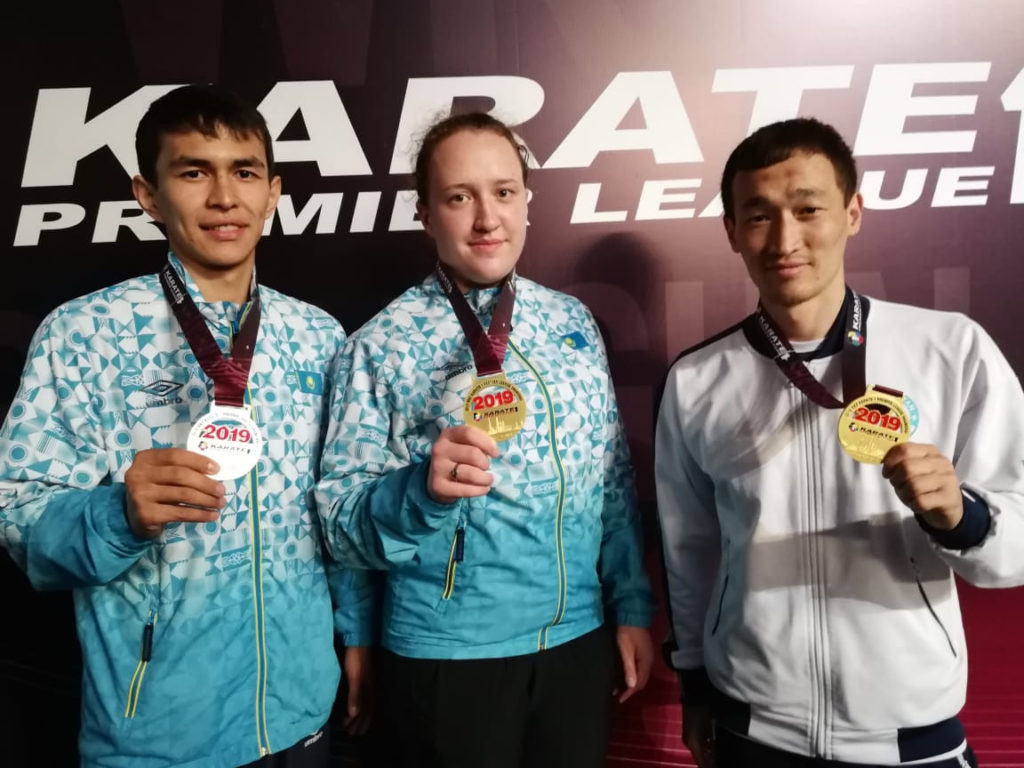 “To win first place in such a tournament is an excellent result for me, considering that I am participating in the Premier League main series for the first time. I hope this is only the beginning and I will be able to keep such a level in the future,” Berultseva told olympic.kz.

Assadilov and Alpysbai won gold and silver, respectively, in the 60-kilogramme category.

After defeating Kuwaiti Abdullah Shaaban, Assadilov dealt more confidently with Nenad Dulovic of Montenegro. Fighting against Russian Evgeny Plakhutin, who is fifth in the world standings, Assadilov twice used tsuki in gedan (low punch), winning 2-0. In the semifinal, he fought with Azerbaijani Firdovsi Farzaliyev, who is eighth in the world standings, scoring an unconditional 4-0 victory.

Alpysbai’s first fight of the tournament was with Jordanian Abdallah Kraik, winning 2-1. He then defeated Turkey’s Kaya Aykut (15th in the world ranking) by a score of 1-0. Alpysbai’s next opponent was Iran’s Majid Hassan, who won the Paris stage of the Premier League this year. Alpysbai earned three points from his first move, allowing him to reach the semifinals, where he fought world champion Douglas Brose from Brazil, who is fourth in the world standings. He again won 1-0.

The final fight should have been between Assadilov and Alpysbai, but the latter refused, giving way to his teammate.

“In each of the competitors there are ambitions, but I believe that the interests of the team are above all. Moreover, I understand very well what gold means for Darkhan; therefore, for the whole team and how important these Olympic rating points are for Kazakhstan. Thus, I gave the victory to Darkhan without a fight… Second place is also a good result, given the level of competition… Refusal from the final match is not a recognition of my weakness or uncertainty in front of a rival, but rather respect for the authority of my elder teammate and friend,” said Alpysbai.

The Grand Winner title is awarded by WKF to athletes who win gold during three stages of the Premier League main series season. Assadilov’s medal followed his first two golds in tournaments in Dubai (the United Arab Emirates) and Rabat (Morocco).

“Each time in the Premier League tournaments the number of participants decreases, because many already understand that they do not have a chance to improve their position in the rankings. Therefore, it is not easy for those who continue the race, because they are the strongest karate players. I’m glad that today our athletes have once again proved their right to be among them. The awards won today are the result of the work of the whole team, which aims to achieve the main thing – tickets to the Olympics in Tokyo. There are still many important competitions ahead… So, we cannot relax,” said Kazakh team head coach Zhastalap Sanauov.

The Karate 1 Premier League, started in 2011, is the league’s most important event. It is comprised of a number of competitions to bring the world’s best athletes together in open championships.