Country grows not by natural resources but by human resources, says Japanese envoy

By Saltanat Boteu in International on 21 June 2019

NUR-SULTAN – Japanese-Kazakh relations have acquired a partnership character, as the countries are developing economic ties, trade and investment, cultural and educational cooperation. 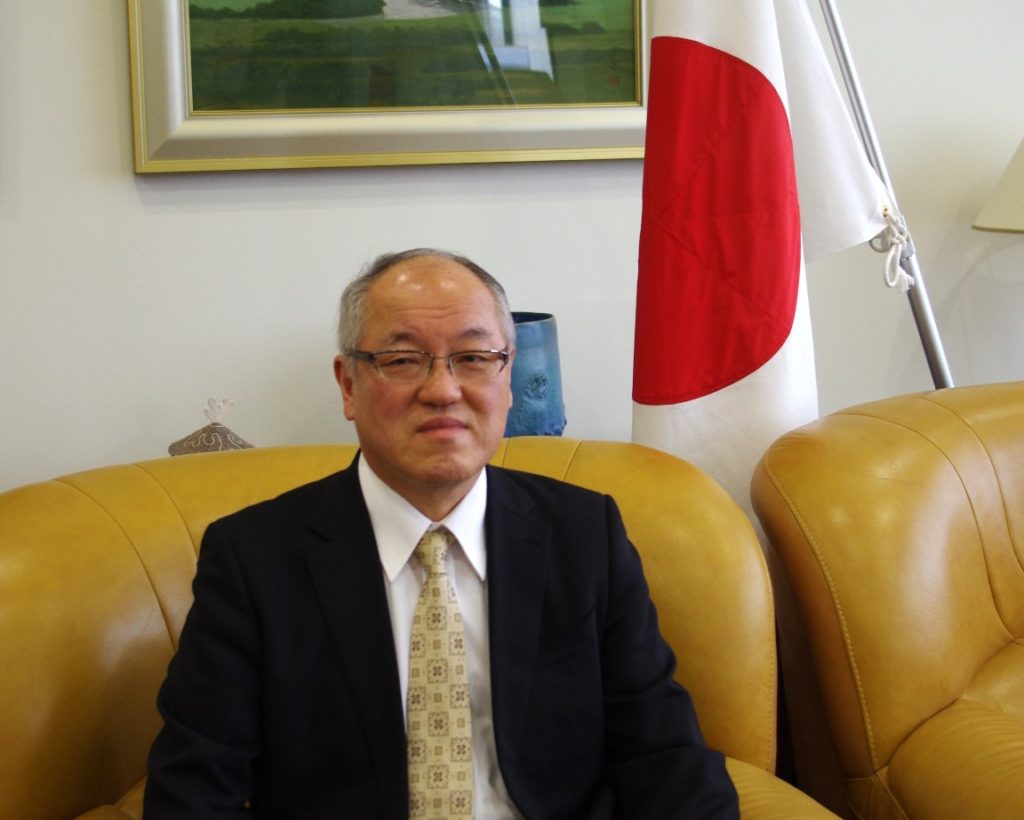 “The country grows not by natural resources but human resources. Thus, I am confident that Kazakhstan can develop by a virtue of great human resources,” Japanese Ambassador in Nur-Sultan Tatsuhiko Kasai told The Astana Times. “Kazakhstan is developing well, but I believe that it has great potential for more growth and I’m sure it’ll reach more.”

Diplomatic relations between the two countries were established in 1992. For nearly three decades, Kazakhstan has been among the developing countries where Japan offered assistance and support through large-scale programmes, loans and grants. As of 2016, Japan offered grants worth 6.3 billion yen (US$58.18 million).

Now, Japan supports Kazakhstan through the Kusanone (grass roots) programme by helping small-scale social projects ensure human security. The programme is one that financially supports local authorities, regional schools, medical institutions, non-governmental organisations, public associations and foundations. It aims to help the simple strata of the population by implementing social projects to ensure human security. Since 1997, 100 projects worth approximately $6 million have been approved for Kazakhstan as a part of the programme.

“Kazakhstan-Japan relations, starting from 1992, developed and have become a partnership. We have good relationships as a result of last 30 years and my mission is to make them even better and stronger,” he said.

The relations took on an expanded partnership character after Japanese Prime Minister Shinzo Abe’s visit to Kazakhstan in 2015 and the then Kazakh President Nursultan Nazarbayev’s visit to Japan the following year.

The Japanese Embassy opened in Almaty in 1993, moving to the capital in 2005. Kasai assumed the ambassador’s post in February, although this was not his first visit to Kazakhstan and the Commonwealth of Independent Countries (CIS).

“For many years, I worked in the Ministry of Foreign Affairs of Japan, being engaged in the affairs of Russia and the CIS, and at the same time I, as an economist, was engaged in and continue to engage in transitional economy issues. My previous duty stations were Russia, Ukraine, Kyrgyzstan and the United Kingdom. The most recent duty station was Vladivostok, in the Far East of Russia,” he said.

“The first time I visited Nur-Sultan was in 1984 (at that time the city was called Tselinograd) and I remember how I studied the methods to grow wheat in the Kazakh steppes. In 2005-2008, while working in Kyrgyzstan, I often visited Almaty and Astana on working visits and for holidays. Now, I have the opportunity to fully focus on my diplomatic activities in Kazakhstan and I am ready to make all the necessary efforts for this,” he added.

“I would like to diversify the commodity trade and investment. Recently, we began importing new goods such as safflower oil and honey in small amounts. I think that the agricultural sector has great potential, because along with food products it covers food processing, light industry, logistics and souvenirs production, which stimulates tourism,” he said.

“Overall, commodity trade between Kazakhstan and Japan is approximately $2 billion. From Kazakhstan to Japan it is $1.5 billion; from Japan to Kazakhstan it is $500 million… We would like to export more products to Kazakhstan,” he added.

“For example, we, in Japan, have banks targeted to the agricultural, fishing industry and small and medium businesses,” he said.

“Every year in Almaty we organise The Day of Culture of Japan; it is a large-scale cultural festival. This year, we organised it for the first time in the capital… Recently, there was a netsuke exhibition. Netsuke are wooden miniature sculptures used during the Edo period to put tobacco or medication in… Also, we organised a concert of Mrs. Toshiko Yonekawa, a famous koto (a Japanese stringed musical instrument) player,” she said.

Japan also supports regional cooperation. In 2004, then-Japanese Foreign Minister Yoriko Kawaguchi started the dialogue with Central Asian countries. Kazakhstan participates in the “Central Asia Plus Japan” dialogue (at the level of Ministers of Foreign Affairs); the first meeting was in 2004 in the Kazakh capital on Japan’s initiative, said Kasai.

Kazakhstan and Japan also have similar positions on topical issues on the global agenda. Japan was the only developed country that co-authored the United Nations General Assembly resolution proclaiming Aug. 29 as the International Day Against Nuclear Tests.

Concluding the interview, Kasai mentioned the 2020 Summer Olympics and Paralympic Games, both to be held in Tokyo, stressing Japan is awaiting more Kazakh guests and inviting tourists to visit.

“Next year, we will host the Olympic and Paralympic Games in Tokyo. Therefore, we would like Kazakh people to know more about Japan. We invite and wait for you in Japan!” he said.