NUR-SULTAN – The film “Aladdin” directed by Guy Ritchie was released May 23 in Kazakh in the capital and a record 3,000 viewers watched the film in Kazakh during its first weekend. 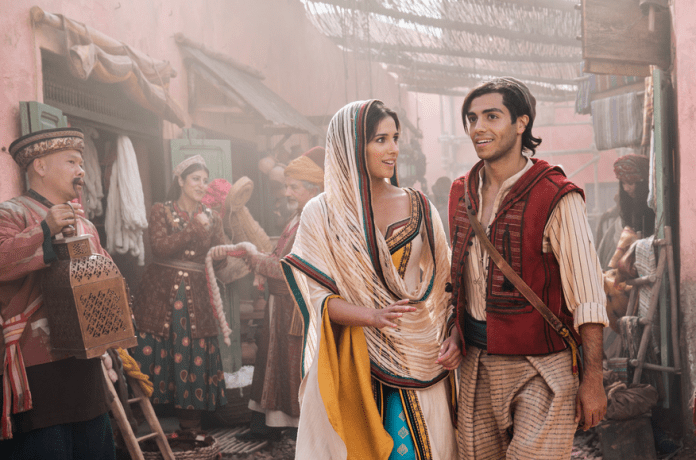 The figure doubled the performance of the film “Dumbo” released in Kazakh. The Meloman Company, the largest home entertainment company in Kazakhstan, stressed that this is a good indicator of attendance for the film, which is available for rent in Russian and Kazakh, reported elorda.info.

The Bolashak Corporate Fund and Meloman Company along with the Aray Media Group studio carried out the film’s dubbing as a part of the Ozinnen basta (Start from Yourself)) project.

“Aladdin” is the 29th film of the project to dub Hollywood films into the state language.

In the film’s story, a street thief named Aladdin, played by Canadian actor Mena Massoud, meets Princess Jasmine, played by the English actress Naomi Scott, in the home market of Agrabah and falls in love with her. Meanwhile, the Agrabah vizier Jafar (Marwan Kenzari) intends to seize power over the city, and for this, he needs a magic lamp, which is stored in a cave of wonders. Only those who are called “the diamond in the rough,” can become the owner of the lamp. A cunning vizier, hungry for power, makes Aladdin get a lamp, but nothing goes as he had intended.

Young Kazakh actor Aisultan Zhaliyev voiced the Aladdin character, Kazakh actress Shehnaza Kyzykhanova gave her voice to Princess Jasmin. The Genie and Jafar in the film speak in the voice of Dauren Sergazin and Nurlan Alimzhanov.

“I was fortunate to voice Genie (in English he speaks in the voice of Will Smith). This is a very complex character. I had to try. The whole work process was not easy, but interesting,” Sergazin told inform.kz.

More than 50 actors from Nur-Sultan and Almaty took part in the casting for the film’s dubbing. The director of the Kazakh dubbing is Shah-Murat Ordabayev. The film’s translator to Kazakh was Asel Mamyrova.

“The film is excellent. Despite the fact that it is a translation, our actors managed to convey all the emotions. I did not see any flaws. I think everyone should watch the movie in Kazakh,” said viewer Akerke Sapuanova.

Thanks to the project, more than 100 local actors were added to the voice database of Walt Disney Pictures. The Kazakh language became the second Turkic language dubbed after Turkish, the 39th for Walt Disney Pictures and seventh for Sony Pictures. Kazakh has also been included among the seven major languages of Hollywood films available for viewing on Blu-Ray, produced for Eastern Europe and the Commonwealth Independent States.