NUR-SULTAN – FlyArystan, Kazakhstan’s only low-cost airline, launched its first flight from Almaty to Nur-Sultan May 1 on a 180-seat Airbus A320. The company plans to fly a million passengers by the end of 2019.

In his welcoming speech, Yessimov stressed the importance of the new airline for Kazakh aviation and developing the country’s regions.

“The emergence of a new player in the airline market will contribute to improving the quality of services for passengers. The initiative to create this low-cost airline was supported by Elbasy (Leader of the Nation, the constitutional title accorded to former President Nursultan Nazarbayev). FlyArystan’s services and pricing are aimed at the availability of air transportation services for a wide range of people and increasing mobility between regions. The first ticket sales aroused great interest. This brand needs to be kept. Expansion of geography and flight intensity will positively affect the social development of the regions,” he said.

Because of the affordable prices, citizens will be able to travel more often. The company also plans to have bases abroad and anticipates an increase in tourism. 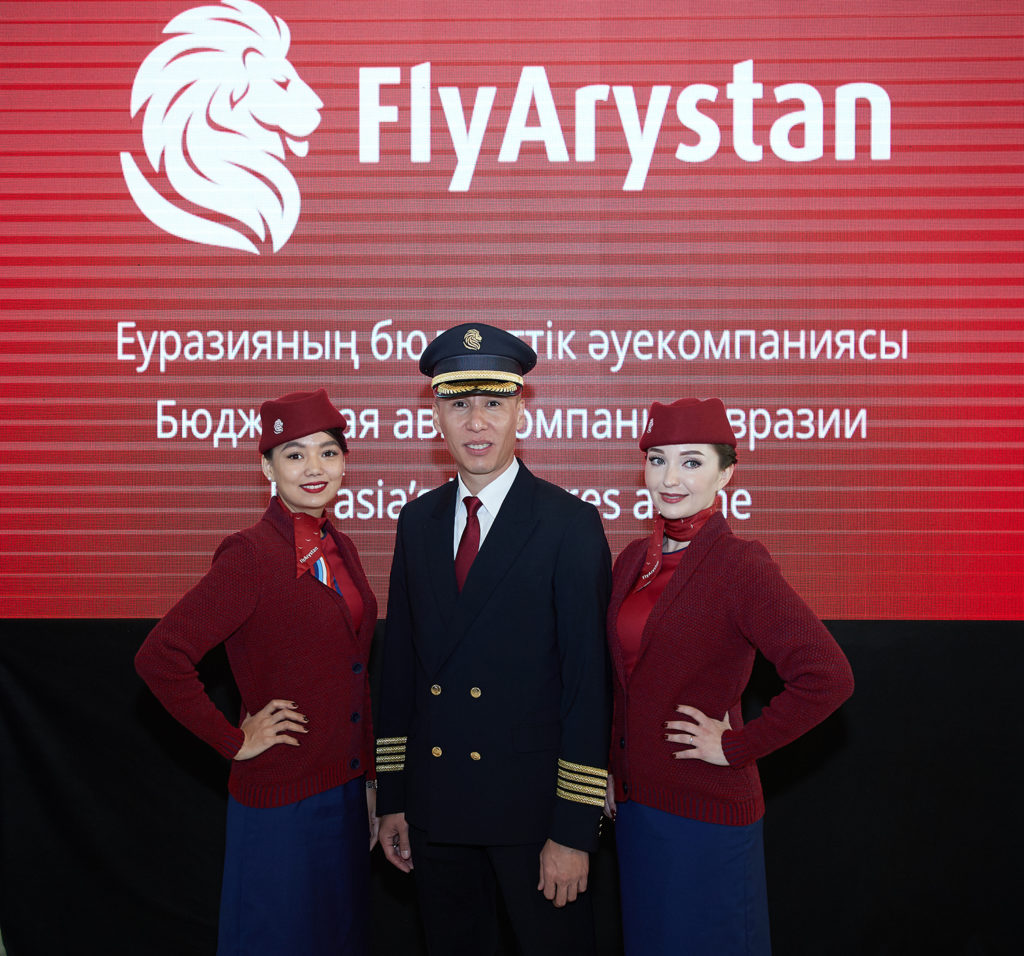 “We expect a significant increase in passenger traffic on both domestic and international routes of Kazakhstan, because over time we plan to be based in other countries. In the meantime, we are ready to provide affordable flights throughout Kazakhstan and we hope that FlyArystan will make a significant contribution to the development of the regional economy,” said Foster.

Sklyar noted Kazakhstan should not ignore international tendencies, because “today, low-cost airlines are most actively developing with the advantage of low costs for passengers,” as reported sputniknews.kz.

Kazakhstan currently has air links with 27 countries on 97 international routes, a number it plans to increase. Last year, approximately eight million passengers were transported, 6 percent more than the previous year, he added.

The company opened ticket sales March 29 for the Almaty-Taraz-Almaty and Almaty-Uralsk-Almaty destinations. It later added Almaty to Karaganda, the capital, Pavlodar and Shymkent routes.

To date, FlyArystan has sold 45,000 tickets, 85 percent of which are fares without luggage. By the end of 2019, the company plans to cover all regions of Kazakhstan.

Initially, flights will operate on four Airbus 320 aircraft with an average age of six years. The company is searching for the second base airport for two of the four planes, as they all currently fly from Almaty. By 2021, the company plans to increase the fleet to 15 aircraft.

“We have announced a competition among local airports for the next FlyArystan airline base. Those who give the best commercial offer have every chance to become the second base airport,” said FlyArystan Director of Sales and Marketing Zhanar Zhailauova.

FlyArystan is a subsidiary of Air Astana based in Almaty, which has a four-star ranking for airline service quality. Air Astana has received the Skytrax World Airline Best Airline of Central Asia and India award for several years.