By Ainur Seidakhmetova in Culture on 27 May 2019

NUR-SULTAN – The Astana Kazakh Drama Theatre recently premiered “Laili – Majnun,” the 12th-century love story based on real life events. The tale of young people’s pure love and affection, popular in Middle Eastern countries, was captured in a poem by Nizami and praised by famous poets Fizuli, Navoi and Rudaki. Kazakh poet Shakarim Kudaiberdyuly later expanded the story in his own poem. 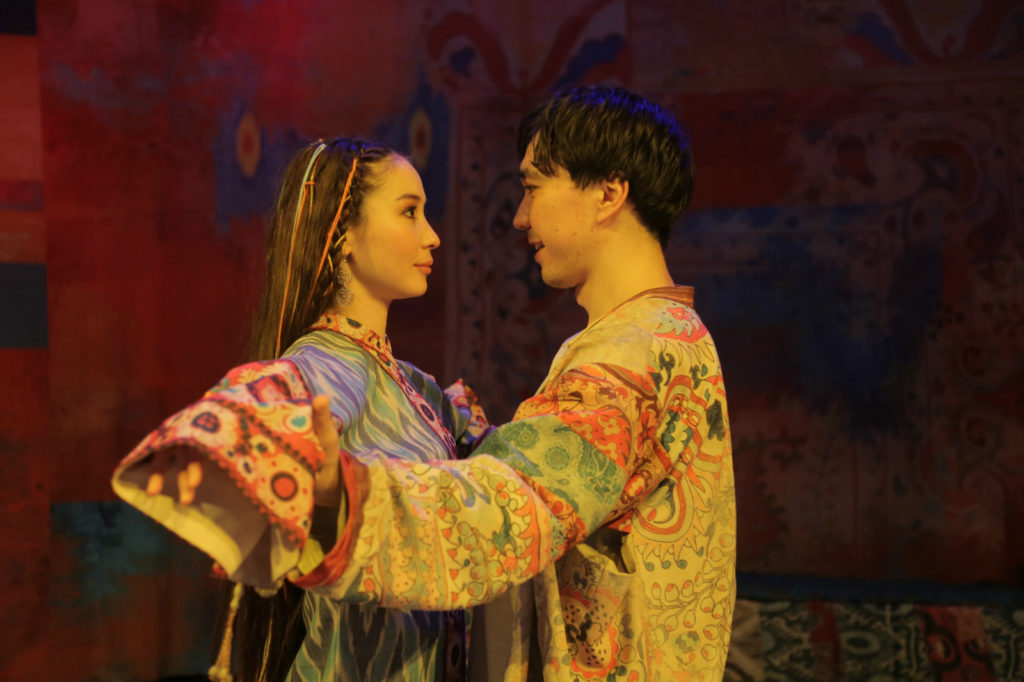 Director Barzu Abdrazakov chose the poem as the basis for his play.

The stage decorated in bright colours and the actors wearing Middle Eastern traditional costumes helps the audience feel the atmosphere of ancient cities. The play starts with the scene at the school where young Laili and Kaiys meet and fall in love, but their families are enemies. Laili’s father opposes their relationship and arranges her marriage to another young man. Upon learning of her nuptials, Kaiys leaves his home and wanders the world, where only wild birds and animals understand his sorrow and pain. People call him ‘Majnun,’ which means ‘madman.’

Laili dies living an unhappy life with her husband. Majnun hears of her passing and soon dies, too, losing all hope to be with his beloved.

Laili and Majnun’s story is a tragedy of an eternal love destroyed by hatred and feuding between families. The theme was repeated nearly 400 years later in Shakespeare’s “Romeo and Juliet.”

“I am leaving the theatre hall with tears in my eyes. This love story is very sad; it touched my soul,” said audience member Aigul.

“I think these kind of stories symbolise the fight between good and bad, light and dark, which always takes place in our life. Laili and Majnun’s story shows young people that they should fight for their love and never give up,” she added.