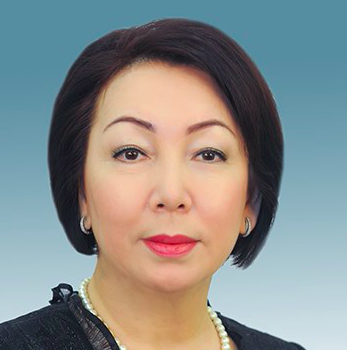 Born in Zhaisan village of the Aktobe Region, 58-year-old Yespayeva is a member of the Mazhilis (lower house of Parliament) Committee on Finance and Budget, the region’s Atameken Union Board and Coordination Council. She graduated from the Almaty Accounting and Credit Technical School in 1982 and the Kazakh State Academy of Management in Almaty in 1993 and worked in the banking sector for more than 30 years.

In a 2018 interview on the YouTube channel 200, Yespayeva clarified her reasons for entering the Ak Zhol Democratic Party.

Founded in 2002, the Ak Zhol Democratic Party is a liberal political party with approximately 255,800 party members that has run on a pro-reform, pro-business platform in the country’s previous presidential elections. Nominated as the party’s nominee April 24, Yespayeva received 49.5 percent of the party’s 190 voters in a secret ballot, collected 139,541 signatures in the country’s 17 regions to meet the CEC requirements for presidential candidacy and is the first woman in Kazakh history to run for president.

“That women have never led the way (in politics) and should know their place – these words really stung. I thought to myself, why shouldn’t a woman, who is not involved in a single corruption case, participate (in the election)? Today, corrupt officials behind bars are predominantly men. In fact, public order is there, where there is a female (leader),” said Yespayeva at the April 24 Ak Zhol Democratic Party Congress.

Latvian Member of the European Parliament Iveta Grigule-Pēterse remarked on the importance of Yespayeva’s trailblasing nomination for women in Kazakhstan in a congratulatory letter available on the Ak Zhol Democratic Party’s official website.

“The deputies of the European Parliament, including myself, watched your nomination at the party congress with interest. The victory of a woman in the debates and secret ballot can serve as an example of the introduction of European traditions into the political practices of your country,” she wrote to Yespayeva.

“As a presidential candidate, I want to recognise that there are currently many unresolved issues in society, particularly social ones. Indeed, we aim to support business in our campaign platform, but I now propose to also address the problems of the working class and solve the problems faced by mothers,” the candidate noted at the April 24 party congress.

“Independence, territorial integrity and national identity are Kazakhstan’s most important values, along with people’s rights and freedoms,” her platform also states. She thus advocates for respecting Kazakhstan’s history, culture, state language and the languages and cultures of all ethnic groups, decolonising the public consciousness through renaming objects, streets and settlements, upholding the passing of an exam on knowledge of the Kazakh Constitution, history and state language as a requirement for granting Kazakh citizenship, supporting Kazakhstan’s traditional religions and protecting society’s spiritual sphere from foreign influence.

Since mid-May, Yespayeva and Ak Zhol Democratic Party representatives have visited the Akmola Region, Aktau, Almaty, Karaganda, the Kostanai Region, Oral and Taldykorgan to spread the key points in her campaign platform. Having collected 112 million tenge (US$295,433.60) in voluntary donations from Kazakh citizens and legal entities, the Ak Zhol Democratic Party spent 109 million tenge (US$287,520.20) by May 17 on the production and distribution of campaign materials, transportation costs and the rental of premises for meetings with voters, reports the CEC.

“These kinds of meetings (with voters) are very important,” said Yespayeva at a May 17 visit to the Kostanai Region. “Today, 43 percent of Kazakhstan’s population resides in rural areas. It is very important for me to convey to the villagers my position on agricultural development as a candidate. Firstly, rural labour must be highly remunerated, farm workers must receive no less than those who work in businesses in the urban area. This is how we can raise living standards, engage young people who are currently leaving their homes to earn money elsewhere.”

“It is during these business trips that we gather a portfolio of points that our candidate and parliamentary party will pay attention to,” added Ak Zhol Democratic Party Head Azat Peruashev during a May 21 visit to Karaganda.