NUR-SULTAN – The Kazakh government has launched a campaign to raise awareness about the June 9 presidential election and to encourage voter turnout. 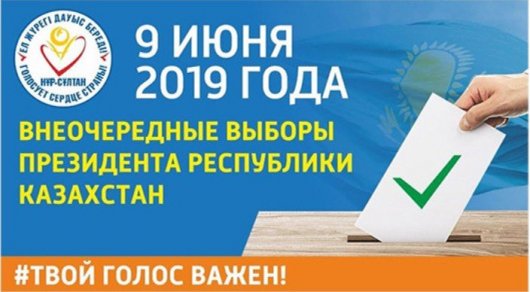 The Heart of the Country Votes campaign includes Facebook and Instagram accounts as well as public events.

The social media component of the Heart of the Country Votes campaign is a part of a larger Kazakh government initiative to better incorporate social media into its outreach and services.

“Social networks will play one of the most important roles. Given the trends that are emerging today, we will pay great attention to this,” Nur Otan Party Deputy Chairman Maulen Ashimbayev told Tengrinews May 4.

The campaign will also include public events and information kiosks with information about where to vote in local districts.

The June 9 election is an early vote called for by President Kassym-Jomart Tokayev. Tokayev assumed the office of president, per the Kazakh Constitution, March 20 after the surprise resignation of former Kazakh President Nursultan Nazarbayev. Tokayev has also been registered by the Central Election Commission as one of the seven candidates for the election, standing for the Nur Otan ruling party.

The Central Election Commission has originally accepted the documents of nine applicants.

In related election news, presidential candidate for the Construction Workers of Kazakhstan Union Talgat Yergaliyev has withdrawn from the race. Also, on May 2, the CEC rejected the registration application of Zhumatai Aliyev after Aliyev failed a Kazakh language proficiency test.

As of May 6, seven nominees had met the legal requirements to be the candidates for the highest office. These are Sadybek Tugel, Tokayev, Amangeldy Taspikhov, Daniya Yespayeva, Toleutai Rakhimbekov, Zhambyl Akhmetbekov and Amirzhan Kossanov.