By Dilshat Zhussupova in Business on 20 May 2019

NUR-SULTAN – Forty-three agreements worth $8.7 billion were signed between Kazakh and foreign companies in agriculture, trade, mining and metallurgy May 17 at the capital’s 2019 Kazakhstan Global Investment Roundtable (KGIR). The event was organised by the Kazakh Ministry of Foreign Affairs and the Kazakh Invest national company. 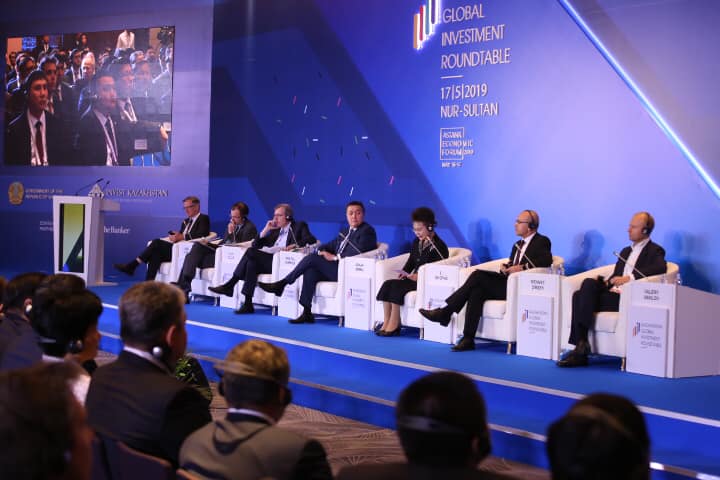 More than $24 billion was invested in Kazakhstan in 2018, which is more than 90 percent of Central Asia’s total foreign direct investment for that year. Kazakh Invest Chairman Saparbek Tuyakbayev noted that foreign companies’ readiness to invest in the Kazakh economy this year signals their positive perception of the country’s power transit.

“Valuing the importance of investment for our economy, we created the Coordinating Council to attract foreign investment, and I was entrusted with the duties of an investment ombudsman. This allows us to promptly resolve issues arising in investment activity and effectively interact with investors,” said Mamin in his keynote speech.

“Kazakhstan is at the top of our agenda and where we invested more than $9 billion this year,” said European Bank for Reconstruction and Development Vice President Alain Pilloux at the plenary session on The New Economy Boosting Kazakhstan’s Investment Potential. “We are present in all sectors of the Kazakh economy, in which we are trying to invest in new processes, industries and services that use the latest, state-of-the-art technologies and operating modes. What we do not do enough of and want to do more of is work together toward a legal framework for a venture capital industry and identifying local teams for creating an ecosystem that can financially support the emergence of new companies that are financially driven.”

“The major aspect that inspired me and my team to start doing business in Kazakhstan is the Astana International Financial Centre (AIFC) because, as a start-up, what we need is safety, simplicity and support for innovation,” added Bitfury Group Chief Executive Officer and Co-Founder Valery Vavilov.

Kazakhstan has 11 transcontinental routes, including five rail and six road routes, and many oil and gas pipelines. Regional connectivity will only heighten with the Belt and Road Initiative’s infrastructure development in the country.

“Kazakhstan does not want to be seen merely as a transit point in the New Silk Road. It also wants business, people, finance and technology to stay here and keep the domestic economy developing,” said Financial Times Global China Editor James Kynge, noting the country will need to overcome its geographic, geopolitical and financial management challenges to achieve this aim.

Discussion also centred on the progress of the privatisation programme and initial public offerings (IPOs) of major state-owned companies, development of financial technologies, energy in the era of new technologies, mining sector trends, results of the introduction of the revised Code on Subsoil and Subsoil Use, digitisation in the public and private sector and prospects in agriculture.

A series of investment-oriented events will soon launch under KGIR, targeting investors in France, Germany, the United Kingdom, the United States, Singapore and South Korea.