NUR-SULTAN – Kazakh athletes Yerkinbek Baiturev and Sofiya Berultseva won silver and bronze medals, respectively, May 17-19 at the Karate 1 Premier league tournament in Istanbul, Turkey, according to the Olympic.kz website. 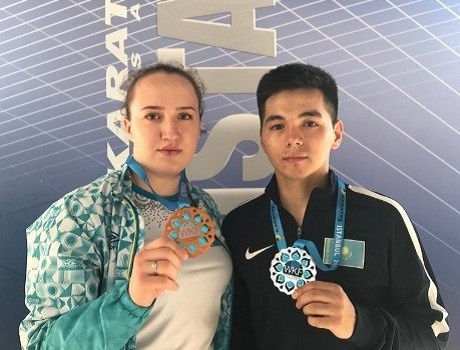 “Yesterday’s juniors took the medals home; the debut of even younger members of the national team, for example, Zhambir Beibars, who had two victorious fights with athletes from Taipei and Egypt, turned out to be successful as well. Kaisar Alpysbay and Daniyar Yuldashev, who are also from a young cohort, although they are on par with the older ones, did not yield to their rivals and showed a great performance. Of course, Darkhan Assadilov’s result was a surprise for us. Even though this time he did not win any medals (Assadilov received an injury that prevented him from competing further) he showed a fighting character, and who, with a leg injury, fought Yerai and did not give him any points. The result of the team’s performance is two medals and three consoling fights. Good result, but it is not our best. There is work to do,” the Kazakhstan National Karate Team Head Coach Zhastalap Sanauov told Olympic.kz.

Sanauov also commented on his surprise regarding the results of the tournament’s most likely winners.

“A-series tournaments are always an ordeal for its participants. The winners list did not have many of the competition favourites: world champions Ganzade Sajjad and Zabiolla Purshab from Iran. Rafael Agayev from Azerbaijan, Italian Angelo Krechenzo and others were left without any medals. The Istanbul stage of the Premier League-2019 can be called ‘the competition of young athletes’, especially for the Kazakhstan team,” said Sanauov.