By Zhanna Shayakhmetova in International on 23 May 2019

NUR-SULTAN – This year marks the 30th anniversary of the United Nations Convention on the Rights of the Child and the 25th anniversary of Kazakhstan’s ratification of it. The Astana Times spoke with the United Nations Children’s Fund (UNICEF) representative in Kazakhstan Yuri Oksamitniy to learn more about the country’s challenges and achievements in protecting children and developing policies to that end. 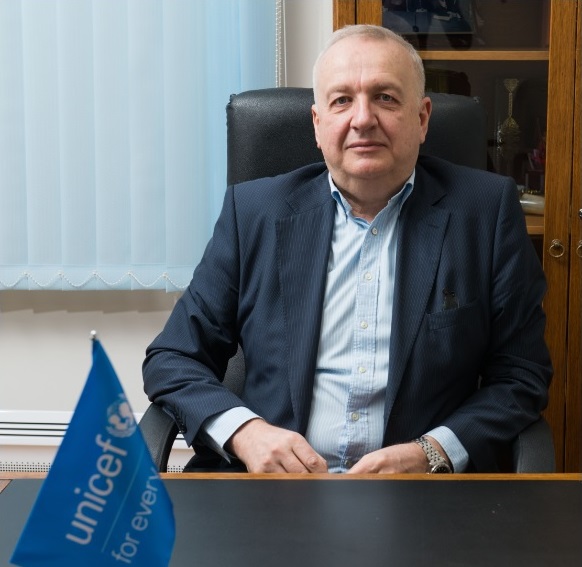 UNICEF collaborates with the Kazakh government, local executive authorities, nongovernmental organisations (NGOs), civil society and media to strengthen children’s rights and ensure equal access to quality social services. A five-year programme of cooperation between the government and UNICEF is being implemented.

“Partnership is important for us. The joint efforts of all interested partners in the health, education and protection of children’s rights are a priority. We work across multiple areas, including health and nutrition, youth and disaster prevention. The role of UNICEF is to serve as a catalyst for social change, effective modern approaches to the protection of children’s rights, development of healthcare, education, social protection and other issues,” said Oksamitniy.

Together with the government, most recently the fund implemented pilot projects in Mangystau, East Kazakhstan and Kyzylorda regions and then spread practices to other regions after they proved to be successful.

To create a safe environment for children, UNICEF and the European Union operated a joint programme, Strengthening Justice for Children and Protecting their Rights, in the field of juvenile justice from 2014 through 2018. It outlined standards for investigations involving children. Child-friendly police, trial and probation offices were strengthened.

“Kazakhstan is the first country in Central Asia to develop a juvenile justice system. Nineteen specialised courts for children are now functioning that has been piloted by the government back in 2007. Since then, many reforms have been introduced, including with UNICEF support. For example, in Ust-Kamenogorsk, a pilot model has been launched calling for teenage offenders not to be punished and providing an alternative programme to children in conflict with the law and their families,” he said.

UNICEF also works with the Emergency Committee of the Ministry of Internal Affairs and the Ministry of Education and Science to integrate disaster risk reduction into state compulsory education standards and curricula. Some 4,000 teachers and 70,000 students in pilot schools and pre-school organisations improved their knowledge and skills regarding safe behaviour before and after disasters.

“We did colossal work to address the issue of adolescent mental health. This is a sensitive topic for any country, but Kazakhstan was open about the need to tackle adolescent suicides. We worked with the leading scholars and psychologists. We developed a programme for preventing adolescent suicide and piloted it in the Mangystau and Kyzylorda regions. The steady trend towards the reduction of suicide remains and this practice will be transferred to other regions,” he said.

It’s important for UNICEF to be able to raise sensitive issues like suicide, Oksamitniy said. Discussing the problems is the first step to solving them.

“Social issues need to be addressed as efficiently as possible with minimal resources. It is important to develop integration between all services related to children with partners in healthcare, education and social protection. We launch programmes that bring results. One of the results of our work was the development of patronage nurse visiting services or the so-called universal progressive model. We trained patronage nurses and social workers to provide better care to mothers and families with children under five years of age. The new system ensures that health and social sectors work closer together, especially in working with the most vulnerable families,” said Oksamitniy. “With our support, the Ministry of Healthcare is introducing innovative tech approaches. We developed a mobile application for medical workers: they submit all the information and it is processed further. We are pleased that workers are enthusiastic about this innovation,” he said.

UNICEF supported the establishment of two resource centres for the integrated management of children’s diseases in cooperation with the local administration in the Kyzylorda and Turkestan regions. The centres offer a wealth of knowledge and continuing education to medical workers enabling them to provide best care to families with children.

“The infant and child mortality rates are the main criterion of the level of the country. Over the years of independence, infant mortality has decreased fivefold. We introduced some projects related to new methods of preparing mothers, neonatal services and childcare. Kazakhstan is also among the countries with zero transmission of HIV from mother to child. This is a great achievement,” he said.

Ensuring the equal rights and interests of all children with special needs is essential. Kazakhstan ratified the UN Convention on the Rights of Persons with Disabilities in 2015, and reforms to targeted social assistance programmes were implemented, taking into account the interests of families with children. As a result, the number of children in low-income families who receive the social benefits doubled.

“In 2016, UNICEF and the Statistics Committee of the Ministry of National Economy released the Children of Kazakhstan report. It is a unique comprehensive publication, which contains all the statistical information about children in terms of health, education, nutrition, children in conflict with the law and other issues. Proper nutrition and diet is also an important area for us because there is a problem of rising obesity among children in Kazakhstan,” he said.

Nur-Sultan hosted the Improving Diets of Children and Youth in Central Asia and Caucasus regional symposium in late April. The event gathered key policymakers from eight countries in the regions to take action against malnutrition.

According to UNICEF, the Caucasus and Central Asia face a double burden of malnutrition and obesity. More than 10 per cent of children in the region don’t reach their potential height growth, while at the same time, obesity rates are rapidly increasing, having shot up more than 80 per cent since 2000.

UNICEF and the Ministry of Healthcare advocate for improved vaccination. “There is no alternative to vaccination,” said Oksamitniy. Without widespread vaccination, there is always a threat of an epidemic. All vaccines in Kazakhstan are certified by the World Health Organisation (WHO) and do not pose a threat to children, he stressed.

UNICEF conducted an analysis of child injuries last year and will launch an injury prevention week to raise awareness, especially among parents, on May 27.

“Preventing child abuse is also a priority,” he said. “In 2018, more than 3.6 million people learnt about positive parenting methods via social media and the press as a part of the communication campaign to prevent violence against children. The campaign was aimed at raising awareness among parents and the public of the inadmissibility of violent methods in upbringing.”

Research conducted by UNICEF and the Human Rights Ombudsman in 2016 showed that about 75 per cent of adults support corporal punishment to control the behaviour of children in the family, while 67 per cent of parents use violent forms of discipline.

Two national child helplines – 111 and 150 – operate in the country to report cases of abuse and violence against children.

“It is vital to adopt a long-term strategic national programme for children in Kazakhstan. The document will be aimed at addressing both the most pressing issues of childhood and building a long-term vision of the well-being and development of children, taking into account modern realities,” concluded Oksamitniy.