By Nazira Kozhanova in International on 31 May 2019

NUR-SULTAN – Participants at the May 29 Eurasian Economic Union (EAEU) summit here discussed cooperation within the union, efforts to strengthen its relationship with non-union countries as well as noted its goals and achievements. 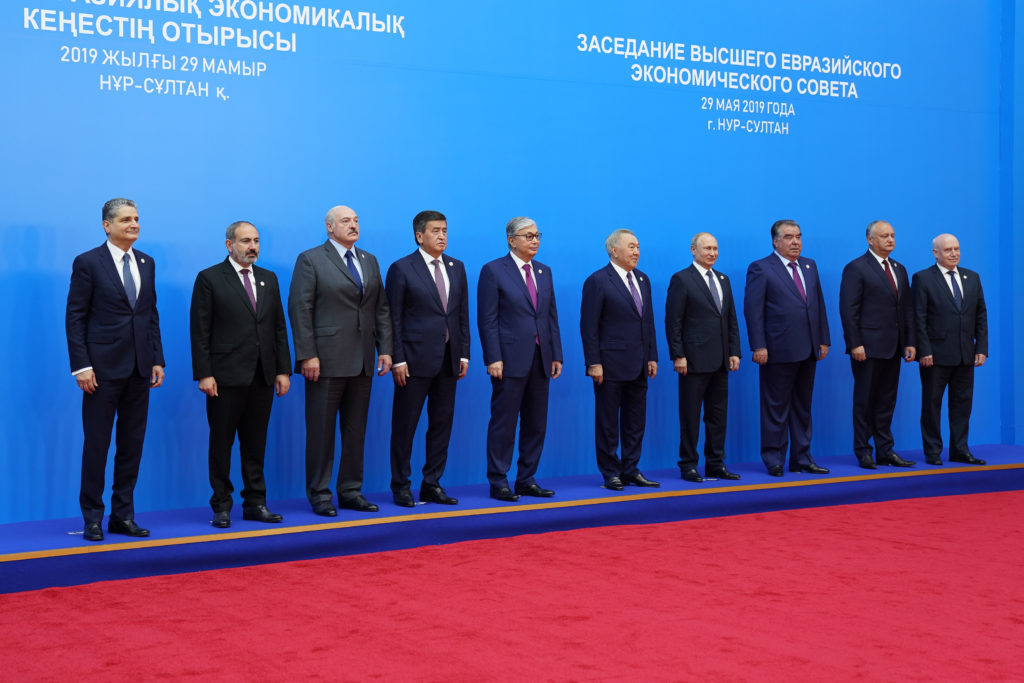 “Our important task is to ensure the attractiveness of our integration project. We must develop an alliance using the mutually beneficial cooperation principle, taking into account the opinions of each other and maximum coordination of decisions. To protect our integration association from discrediting ourselves in the eyes of the international community… In other words, the conditions of our cooperation should be truly more attractive in comparison with the conditions of cooperation with countries that do not participate in this integration project,” Kazakh President Kassym-Jomart Tokayev told the gathering.

“Today, the EAEU is positioned as a rapidly growing integration association, and it is important to maintain this growth trend. For this, it is necessary to further advance the priority areas of the union. One of the directions is digital agenda implementation. We have some results, and within the framework of this development vector, I have declared the current year as the Year of Regional Development and Digitisation of the Country,” added Kyrgyz President Sooronbay Jeenbekov.

“I am convinced that the signing of a pension agreement will be a big step towards achieving equality of our workers. I consider it necessary to continue to work on creating favourable conditions for them by improving the legal base of the union,” added Jeenbekov. This proposal was supported by Russian President Vladimir Putin.

To achieve the goals outlined by the summit, 18 documents were signed by summit participant country representatives. The goals included interactions between union countries on issues such as coordinating macroeconomic policies, some aspects of the service sector liberalisation, natural monopolies regulations, customs fees regulation and imported goods tracing.

One of the documents signed also commemorated Kyrgyzstan joining the EAEU.

Overall, the focus was on increasing cooperation within the union, as noted by Kazakhstan’s First President Nursultan Nazarbayev, who participated in the event.

“Given the favourable geographical location, our countries should speed up the implementation of large joint projects work. We have a powerful base in our countries for this,” said Nazarbayev.

“We need to establish full-fledged economic cooperation between the EAEU, the (European Union) EU, the (Shanghai Cooperation Organisation) SCO and, possibly, (Association of South East Asian Nations) ASEAN. This is not an easy task. But if we work together, then such ideas can be promoted. The meaning of our Eurasian space is not to close it off, but to make it more open to global interactions,” said Nazarbayev.

The rest of the documents concerned the union itself, with Nazarbayev being appointed the Honourary Chairman of the Supreme Eurasian Economic Council and receiving the Medal for Contribution to the Development of the EAEU. Nazarbayev’s role in the union was highlighted by the summit speakers, particularly by Belarussian President Alexander Lukashenko.

“They (experts) worked very seriously with him when he was the President. And we can’t lose it. At the meeting, I proposed that Nursultan Abishevich actively engages with the union affairs, including revising everything that we did or did not do in our union, starting from the staff of our commission and ending with the strategic directions of our activity. Here, he can provide us with invaluable assistance. Therefore, one should not think that this is some kind of gift to a person who was the President of Kazakhstan yesterday and left today,” said Lukashenko.

Tokayev, in his speech, also outlined the economic results achieved by the EAEU member countries and Kazakhstan.

“The EAEU Customs Code was adopted, a common market of services and labour is being created, administrative procedures within the framework of supranational regulatory framework are being improved. More than 40 countries of the world have expressed a desire to develop trade and economic cooperation with the EAEU. I am sure our work will interest many countries of the world and allow us to build a large and economically robust Eurasia in the foreseeable future… Last year, GDP growth of the EAEU member states was 2.5 percent. The volume of foreign trade grew 19 percent, exports grew 27 percent. Mutual trade within the union increased 9 percent. If we talk about Kazakhstan in 2018, our economy grew more than 4 percent,” said Tokayev.