By Elya Altynsarina in International on 23 April 2019 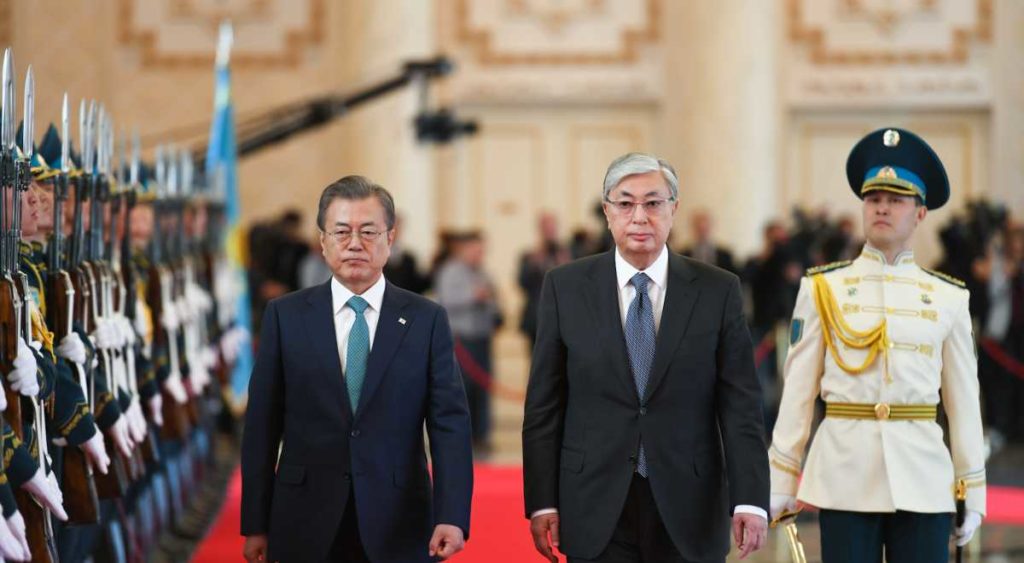 The two presidents signed a wide-ranging joint statement that dealt, in part, with the Fresh Wind New Economic Programme between Kazakhstan and South Korea. According to the joint statement, the Fresh Wind covers areas such as infrastructure construction, agriculture, healthcare and culture.

“We are already implementing large projects in engineering, road and infrastructure construction, agriculture, the financial sector, healthcare, information and communication technologies. It is great to see that Korean business has a growing interest in stepping up cooperation,” Tokayev said at the beginning of the meeting with the Korean leader at the Akorda presidential residence.

Approximately 110,000 Koreans live in Kazakhstan and South Korean businesses in Kazakhstan operate in the food, mining and automotive sectors.

“Last year, we reached a record $4 billion [in bilateral trade], doubling the volume of 2017. Systematic development; only inflow of direct investments from Korea amounted to about $7 billion,” he said.

Earlier, Foreign Minister of Kazakhstan Beibut Atamkulov and Korean Ambassador Kim Dae-sik announced that bilateral trade reached $3.9 billion in 2018, including $2.9 billion in exports and $922 million in imports. The sides noted then that approximately 500 joint companies are currently operating in Kazakhstan. Hyundai, LG, Samsung, Lotte Confectionery, SK, Highvill are among the Korean companies working in Kazakhstan.

Kazakh officials have expressed interest in learning about and introducing Korean innovative technologies.That interest is expected to be revived under an intergovernmental commission on trade, economic and scientific and technological cooperation and through opening a Kazakhstan-South Korean International IT Centre in the Kazakh capital.

The presidents also agreed during the visit on the need to develop transport routes and implement joint infrastructure projects. They also discussed education and healthcare, the Aral Sea, the rehabilitation of ecological disaster zones and parliamentary diplomacy.

Tokayev noted the importance of the peace process on the Korean Peninsula and reiterated Kazakhstan’s support for de-nuclearisation in the region.

Moon Jae-in said Kazakhstan is a key partner in promoting Korea’s New Northern Policy, which seeks to establish peace and expand cooperation on the Eurasian continent. Kazakh and North Korean officials have said they seek to expand cooperation in implementing the policy.

“I hope my visit will give impetus not only to the development of bilateral relations, but also to the strengthening of multilateral cooperation between the Republic of Korea and the countries of Central Asia,” said the Korean leader.

The presidents also held a joint press briefing after their meeting.

Commending the agreements reached, Tokayev underlined the importance Kazakhstan puts on relationships with its second largest trade and economic partner in Asia. The leading role of Nur-Sultan in advancing the global anti-nuclear movement has been highlighted in relation to efforts to denuclearise the Korean Peninsula. “We are closely following it and highly commend your efforts,” said Tokayev, referring to South Korea’s efforts.

The presidents also attended a Kazakh-Korean business forum while delegations from each country also signed eight cooperation agreements during the visit.

Moon Jae-in began his visit to Kazakhstan in Almaty on April 21 where he saw a play at a local Korean theatre and met with some 300 Koreans living in the city.

He also attended a ceremony returning the remains of two Korean soldiers that fought against Japan.