NUR-SULTAN – The Kazakh male acrobatic gymnastics team of Daniel Dil and Vadim Shulyar won the gold medal March 25 at the 2019 Fédération Internationale de Gymnastique (FIG) World Cup in Las Vegas. The women’s team of Anel Nurzhanova and Yulia Prosvetova took the bronze. The victories are the first for the country at the world championship level. 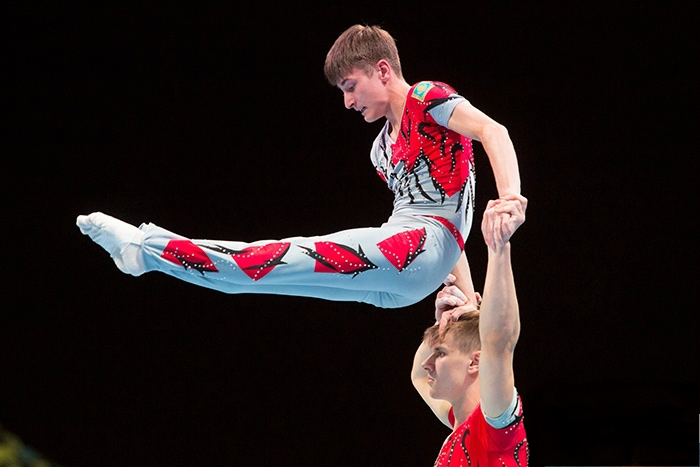 “This is the first medal in the history of acrobatics in Kazakhstan at such top-level tournaments in this age category. Congratulations to the team and their coaches! Today, they are the best in the world,” said Karaganda Regional Department of Physical Culture and Sports head Dmitry Karpov, reported sports.kz.

The team performed an international class master of sports programme. Earlier, they had the rank of Kazakhstan masters of sports.

“Athletes from Kazakhstan won for the first time in competition at this level, although this is not the first victory of Zhambyl athletes under the guidance of coach Tatyana Simagina,” Zhambyl Akimat (administration) Department of Physical Culture and Sports head Oksana Borisyuk told inform.kz.

“Ferreira and Teixeira (Portugal) won with a routine that scored highest for difficulty and execution, while there were also impressive medal-winning performances from Katelyn Dullard and Tori Singleton (Austria) and Anelya Nurzhanova and Yuliya Prosvetova (Kazakhstan) who took silver and bronze, respectively, in their World Cup debuts,” noted the FIG website.

The 2019 World Cup, known as the Vegas Acro Cup, was held March 22-24 at the Rio Hotel, Casino and Convention Centre. More than 110 athletes from 18 countries competed in the event. Pairs and groups performed three routines – balance (focus on strength, poise and flexibility), dynamic (includes throws, somersaults and catches) and combined (elements of both).