NUR-SULTAN – In this exclusive interview, Atyrau Region Akim (Governor) Nurlan Nogayev talks about continued efforts to develop major industries and SMEs in the region famous for its abundant oil and gas reserves and being home to Tengiz, one of the world’s largest onshore oil fields. 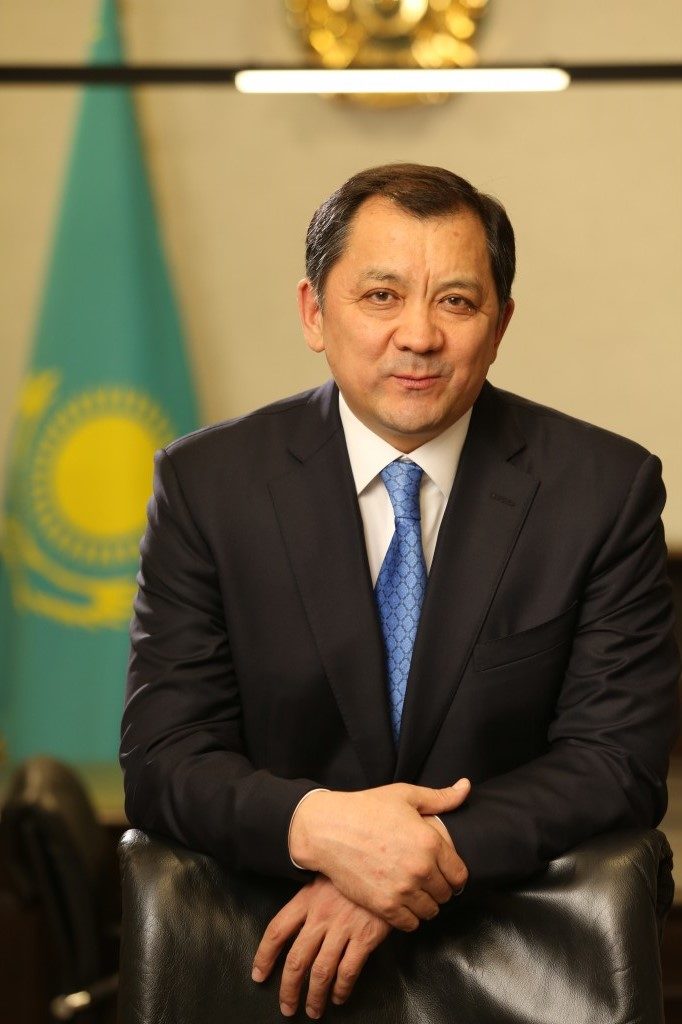 What types of social and economic development issues are on the agenda for your region?

The results of the social and economic development of the region for 2018 are as follows:

The share of the region in the country’s gross domestic product is 12.4 percent.

The volume of industrial production amounted to 7.5 trillion tenge (US$19.6 billion); the physical volume index is 110.6 percent.

Products worth 6.8 trillion tenge (US$17.8 billion) were produced in the mining industry; the physical volume index was 111.2 percent.

Approximately 47.2 million tonnes of oil and 23.6 billion cubic metres of associated petroleum gas were produced, which equals 111.8 percent and 113 percent, respectively, compared to 2017.

Tengizchevroil produced 28.6 million tonnes of oil, or 99.7 percent compared with 2017, as well as associated petroleum gas in the amount of 15.6 billion cubic metres (99.3 percent).

The volume of industrial output in the manufacturing industry amounted to 590.5 billion (US$1.5 billion) tenge or 108.1 percent.

Investments in fixed assets amounted to 3,689.5 billion tenge (US$9.6 billion); the physical volume index is 136 percent.

Approximately 793,900 square metres of housing were commissioned in the region (or 127.2 percent in comparison to 2017).

The volume of construction work amounted to 637.2 billion tenge (US$1.7 billion); the physical volume index is 107.2 percent.

As for agriculture, forestry and fisheries, the index of physical volume (services) was 104.6 percent or 67.3 billion tenge (US$175.5 million).

Approximately 1,444.4 billion tenge (US$3.8 billion) were transferred to the National Fund.

What work is planned to improve performance in the coming years?

The akimat (the administration) of the Atyrau Region has been carrying out systematic work to improve the region’s investment climate and increase foreign direct investment in the economy.

Currently, the region successfully cooperates with more than 50 countries of the world. More than 1,000 joint ventures and foreign enterprises have been created and successfully operate in the region.

In order to attract domestic and foreign investment in the regional economy, an international investment forum is held annually in the oblast, as well as Global Oil & Gas Atyrau regional exhibitions and the Atyrau Build construction exhibition. These events host exhibitions of investment projects requiring investments.

The investment potential of the region has a number of positive factors:

One of the elements of investment attractiveness of the region is the presence of the National Industrial Petrochemical Technopark (FEZ), with a total area of 3,400 hectares, the purpose of which is the construction and commissioning of infrastructure facilities and the development of chemical, petrochemical and related industries. Today, 15 participants are registered on the territory of the FEZ and a number of investment projects are being implemented.

The FEZ provides potential participants with a special legal regime in all its territory, which allows tax, customs and other benefits.

How much foreign investment was attracted to Atyrau Region in 2017 and 2018? Please tell us about the most significant projects in the construction, manufacturing and agribusiness fields.

The main sectors of the region’s economy that form a significant part of the GRP are mining, oil refining, mechanical engineering, trade and construction.

In January-December 2018, the share of the mining sector in the structure of industry was 91.1 percent; the share of manufacturing, 7.9 percent and others, 1.0 percent.

In January-December 2018, the volume of production in the mining industry amounted to 6,8 trillion tenge (US$17.8 billion) and grew by 11.2 percent compared to the previous year.

The basis of the mining industry is oil and gas, sand and salt.

Approximately 47.2 million tonnes of oil and 23.6 billion cubic metres of associated petroleum gas were produced, which is 111.7 percent and 112.9 percent, respectively, compared to the 2017 level.

One hundred and nine mineral deposits have been explored in the region. There are 21 vacant deposits (deposits of construction and technological raw materials) available for investors.

According to experts, the most promising deposits are:

There are 626 industrial enterprises in the region, including 18 medium and 19 large enterprises.

Industrial production is concentrated in the city of Atyrau and Zhylyoi district of the oblast.

These enterprises manufacture products for national companies, as well as other consumers in the region and the near abroad, and can potentially be considered as initiators of the implementation of new investment projects.

Could you talk about activities and projects in the field of public-private partnership (PPP)?

For the development of PPP mechanisms, explanatory and methodological work was carried out in the region; as a result, an analysis was made with regard to proposals on construction, reconstruction, trust management and service contracts received from departments and akimats of Atyrau city and districts.

To date, proposals are being received on a number of promising projects in order to expand the use of various forms of PPPs and to do a phased substitution of budget funds for private investment.

In addition, documentation is being drafted for several projects.

What work is done to attract tourists? How many tourists visited the region in 2018?

The region pays special attention to the development of tourism. We are one of the leaders in Kazakhstan in terms of business tourism.

Currently, the city of Atyrau has developed and operates a sightseeing tour programme which includes many interesting historical and cultural sights, monuments and entertainment facilities, as well as restaurants and cafés with a variety of cuisines of the people living in the region. At the same time, tourists have the opportunity to visit the creative centre, where weekly shows of the national traditions and customs of the Kazakh people are demonstrated.

Additionally, in summer a trip on excursion boats on the Ural River, flowing in the very centre of Atyrau and dividing the city into two continents, Europe and Asia, is available for the population and guests of the city.

The Akzhayik State Natural Reserve on the Caspian Sea coast has unique species of rare birds listed in the Red Book and amateur sport fishing is permitted, which is of considerable interest for tourists.

In the summer period, guests of the city have the opportunity to visit camp sites along the coast of the Ural River, where entertainment services in the form of rope parks, climbing walls and horse riding are provided.

One of the most promising tourist sites in the region is the ancient Saraishyk settlement along the northern branch of the Great Silk Road, which is a source of the greatest interest among tourists and travellers.

At present, work has begun for the infrastructural development of the site and the creation of a visitor centre on its territory.

In addition, there are plans to build tourist industry facilities and a children’s camp on the coast of the Caspian Sea in the Issatai district of the Atyrau region; the corresponding work is also underway to prepare their design and estimate documentation.

A saline lake in the Indersky district allows promoting health tourism in this area. Last year, scientists carried out research and development work on the use of mud and salt of the Inder saline lake for medicinal purposes and obtained a positive result on their indispensability in various diseases. Work is underway on its further development.

Kurmangazy district is quite interesting, because its recreation centres offer hunting and fishing on the Kigach River.

The number of tourists who like active recreation is increasing from countries such as France and Russia. The beautiful natural terrain and clean air of the coast of the Kigach River have a great potential for the development of eco-tourism.

Steppe expanses of Issatai district are convenient for the development of extreme tourism. A route for vehicles and bicycles has been worked out across the region. This route is mainly used by expeditions from countries such as China, France, Germany and Italy.

For the further development of this area, there are plans to popularise and promote this international route by developing a promising new segment – autotourism and caravanning. The planned overhaul of the Atyrau-Astrakhan Highway will be a huge impetus to this end.

Additionally, guests and visitors to the region show interest in the agroindustrial sector, in particular camel, horse and other farms.

Tourist companies of the region continue to actively develop routes in order to boost domestic and inbound tourism.

What work is being done to improve the transport system in Atyrau Region?

The length of automobile roads of regional and district significance is 2,000 km.

During 2018, in order to develop transport infrastructure work was carried out to repair roads of regional and district significance – 75.3 km and 200.9 km of the road of the city of Atyrau and suburban settlements covering 268 streets.

Furthermore, work continues on the overhaul of access roads (with footpaths) to the villages of Akkala and Yntymak, Indersky district; the reconstruction of the Zhastalap-Zhylandy highway of Kurmangazy district; the overhaul of the Kotyaevka-Shortanbai road and intra-village roads of Shortanbai and reconstruction of the access road to the village of Zhan Zhanbai, Issatai district, including intra-village roads.

This year, work is being done on the overhaul of roads in the villages of Mukyr and Sagiz of the Kyzylkoginsky district and on the 0-29 km section of the Ganyushkino-Primorye-Uteri-Kotyayevka regional road in the Kurmangazy district and work has begun on repairing Birlik, Ganyushkino, Kotyaevka, Safon and Tengiz access roads and inter-village roads and the intra-city highway of Kulsary.

In Atyrau, 268 streets with a total length of 200.9 km were built in the suburban settlements of the city in 2018. In particular, work was done on laying roads in the villages of Akzhar-2, Atyrau-1, Birlik, Birlik-2, Damby, Geolog, Kokarna, Munaishy, Talgayran, Tomarly-2, Vodnikov-2, Yerkinkala-2, Zhanatalap-1 and Zhuldyz-1, 2 and 3. In addition, the reconstruction of Baimukhanov, Taimanov and Vladimirskiy streets with a total length of 8 km was carried out and the repair of roads (patching) with a total area of 19,789 m2 was performed.

In 2019, there are also plans to reconstruct the section from 0-10 km of the Atyrau-Inder highway in the city. A project is under development for the reconstruction of the 10-20 km section.

In addition, in order to ensure the safety and movement of vehicles in the new Bereke microdistrict, a design estimate of a road junction has been developed, as well as a positive conclusion of the state examination received. The beginning of construction is scheduled for 2019.

As for passenger transportation, by order of the Akim of Atyrau city, the L. B. Goncharov Kazakh Automobile and Highway Academy has been developed and is implementing the Concept of Development of Public Transport in the city of Atyrau for 2017-2022.

In order to update the public transport and improve passenger traffic in the city of Atyrau, the Atyrau-Avtopark entity was established under the Atyrau Social Entrepreneurial Corporation. With the assistance of single operator Kazakhstan Development Bank Leasing, the acquisition of 100 units under the leasing agreement in 2018 and 200 units of buses in 2019 was carried out. Today, 65 new buses are operating in the city. Work continues on the delivery of new buses and the commissioning of routes in accordance with the agreement.