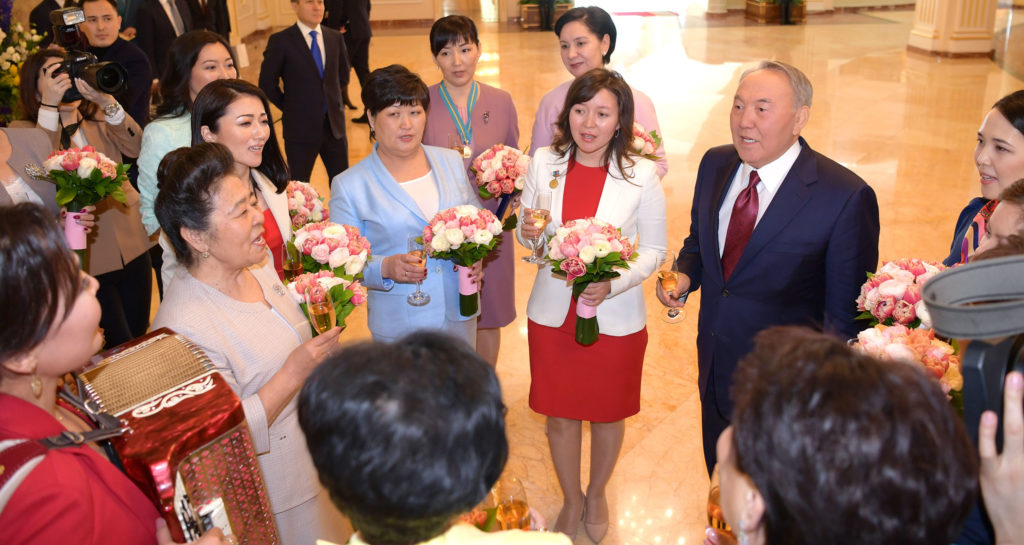 “Today, female workers in education and health care comprise 70 percent; in the financial and insurance sector, 60 percent, and in agriculture, 45 percent. There are many of those who live up to their potential in business, the creative sphere and sports. For us, for men, it is time to think of how to keep up with you,” he said.

“In our dynamic, full of innovations century, you fruitfully live up to your potential and [use your] abilities for the good of the country. You reach new heights and significant results in many areas and directions. In fact, women are the agents of my ideas for modernisation,” he added.

Nazarbayev also spoke about the role of women in educating future generations of Kazakh citizens.

“It is a woman who presents the most important [thing] – the miracle of birth – to the world. Currently, on average we have three children in one family and approximately 400,000 babies are born in a year. Children are the wealth and pride not only of a family, but a valuable capital of the country. Therefore, our mothers, and especially those with many children, deserve deep respect and gratitude. They are making a real feat of motherhood, multiplying the benefits of the nation,” he said.

The President also stressed the importance of new large-scale social projects to support mothers with many children, noting the amount of assistance will consistently increase.

“They are aimed at enhancing social support for large families with low incomes. Social payments and benefits, wages of low-paid public sector workers will be raised, housing will be built. There are the Baqytty Otbasy (Happy Family), Qutty Meken (Blessed Home) and Auyl – El Besigi (Village is the birthplace of a nation) projects that are aimed at systematic support [of the families],” he said.

Every year on the eve of International Women’s Day, the President meets with women from various fields to congratulate them and discuss ways to expand their active participation in the country’s economy.