By Saltanat Boteu in International on 7 March 2019

ASTANA – The European Union is Kazakhstan’s biggest foreign investor, and Kazakhstan is the EU’s closest political and economic partner among the countries of Central Asia while EU-Kazakhstan cooperation is expanding in education, research, trade, transport, agriculture and environmental work, among many areas, the European envoy in Astana said. 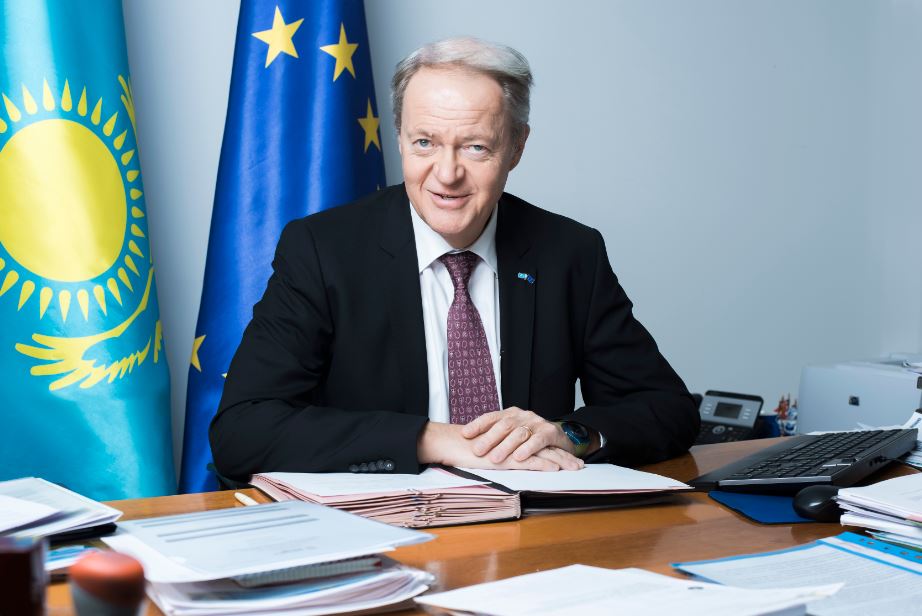 Official diplomatic relations between the EU and Kazakhstan were established in 1993, and since then, the EU has provided official development assistance to the country.

“Over 350 projects amounting to 180 million euros [US$204.12 million] have been funded by the EU, notably focusing on strengthening the capacity of regional and local government, justice sector reform and human rights,” the Ambassador, Sven-Olov Carlsson, an experienced Swedish and European diplomat, said in an interview for this story. “Nowadays Kazakhstan is defined as an ‘upper mid-income’ country and does not qualify anymore for our bilateral aid, so our focus is shifting from earlier bilateral programmes to capacity-building ones with a regional dimension.”

The EU and Kazakhstan signed their Enhanced Partnership and Cooperation Agreement (EPCA) in December 2015. The agreement is now the main document framing EU-Kazakhstan relations and provides the legal framework for developing bilateral relations in 29 key policy areas, such as political dialogue, human rights, energy, transport, the environment and climate change, employment and social affairs, culture, education and research.

“The EPCA is a so-called new-generation agreement, which also serves as a model of future cooperation for other countries. It is not by chance that Kyrgyzstan and Uzbekistan would like to follow the Kazakh example and sign a similar framework agreement with the EU. The EPCA with Kazakhstan has been provisionally implemented for almost three years [since May 2016] and provides a significant boost to economic and political ties between the EU and Kazakhstan,” said Carlsson. The document has now been ratified by Kazakhstan, 25 out of 28 EU member states and has also been approved by the European Parliament. It will enter into force fully once all EU member states ratify it.

As a part of the agreement, trade between European countries and Kazakhstan increased from $2.2 billion in 1999 to more than $29.48 billion in 2018.

“It is a notable and common achievement that today the EU is Kazakhstan’s biggest foreign investor and that Kazakhstan is the closest economic and political partner in the region for the EU,” he said.

The EU is actively investing into projects for youth, particularly in education, scientific research and civil society development.

“One of the most popular EU programmes, Erasmus+, has already offered nearly 2,000 scholarships for Kazakh students and staff to come to study in Europe, and approximately 800 scholarships for European students to study in Kazakhstan. We have other research programmes with Nazarbayev University and other institutions as a part of Horizon 2020, which is also very promising,” said the ambassador.

According to Carlsson, one of the areas of cooperation between the EU and Kazakhstan with the largest potential is transport and logistics.

“There is a growth prospect in those sectors of Kazakhstan’s economy where the EU can offer advanced technologies and standards. We are already seeing this, for example, in the development of railways and this is in line with the new Europe-Asia Connectivity Strategy and Kazakhstan’s own ambitious plans as a ‘land bridge’ in Asia,” he said.

“In the perspective of economic diversification and its high potential, I would also mention the agricultural sector, particularly agro-food processing, and the possibilities to better take advantage of Kazakhstan’s vicinity to the large markets of its neighbours,” he added.

Another area relates to women’s empowerment, particularly a programme that will bring Afghan women to study at Kazakh and Uzbek higher education institutions and get professional training beginning this year. The programme’s first phase will cost approximately 2 million euros (US$2.27 million).

Currently, the EU is focusing on helping diversify Kazakhstan’s economy and supporting new opportunities for small and medium-sized enterprises in innovations. In the future, the EU’s cooperation with Kazakhstan will home in more on investments and private sector development.

“The country will continue to benefit from regional programmes such as Central Asia Invest, SWITCH Asia and the Investment Facility for Central Asia (IFCA) contributions to investments and technical assistance co-funded by loans from European Financial Institutions. Global EU programmes in support of human rights promotion (EIDHR), civil society organisations and Erasmus+ will also continue to be available for Kazakhstan,” said Carlsson.

“In addition to promoting trade and investment we need to work together to support inclusive and sustainable development in the regional context. Many of the common challenges, such as the environment, climate change and water management require wider approaches and closer cooperation between all countries of Central Asia. The EU is a strong supporter and ready to promote such cooperation,” he said.

“The EU appreciates Kazakhstan’s active role and support for a strengthened cooperation in Central Asia. Through the new strategies on Central Asia and Europe-Asia connectivity the EU is further committed to share its achievements and values with countries and peoples in the region,” concluded the ambassador.