By Aidana Yergaliyeva in Nation on 27 February 2019

ASTANA – New ministers, including minister of education and science, minister of agriculture, minister of national economy and of infrastructure and development took their oaths of office Feb. 26 at the first meeting chaired by new Kazakh Prime Minister Askar Mamin. 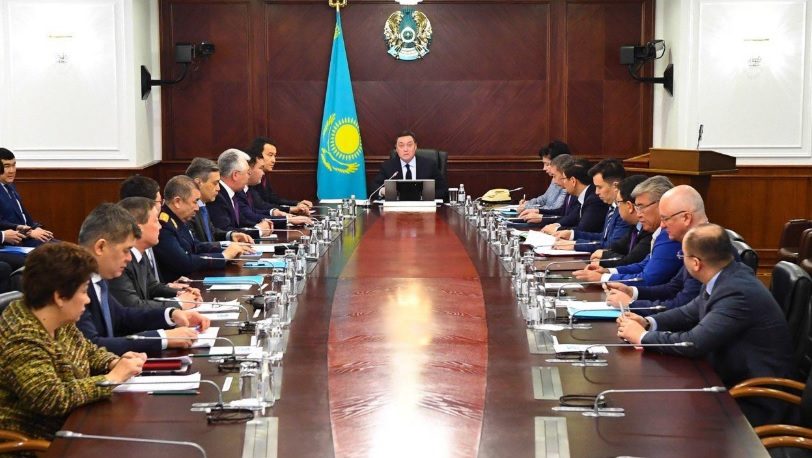 “Our government should be the government of real action, aimed at concrete results,” said Mamin.

New Minister of Agriculture Saparkhan Omarov had been a member of the Mazhilis (lower house of the Parliament) of the sixth convocation. He had been a chair to the committee on Agrarian Issues of the Mazhilis since March 2016. Over the years, he worked as department head of National Securities Commission, vice president of Food Contract Corporation, deputy head of the Economic Relationship Management of the President’s Office. Omarov also had been the state inspector of the State Control and Territorial-Organisational Work Department of the Presidential Administration between 2008 and 2011. He was a member of the Accounts Committee for Control over the national budget execution from 2011 to 2014. He had been the vice minister of agriculture from 2014 to 2016.

Former board chair of the Nazarbayev Intellectual Schools Kulyash Shamshidinova replaced Yerlan Sagadiyev becoming the new minister of education and science. She graduated from the chemistry department of Al-Farabi Kazakh National University in 1979. Shamshidinova started her career as a chemistry teacher in a school in the Almaty region. Then, she had been working as a deputy director of the Taldykorgan regional institute and the director of secondary school No. 18 in Taldykorgan. Shamshidinova had been the deputy akim of Taldykorgan from 1996 to 2002. Over her career, she was reappointed twice as vice minister of education and science. She had been the general director of Bobek National Scientific and Practical Educational and Health Centre between 2005 and 2007.

Ruslan Dalenov became the new minister of national economy replacing Timur Suleimenov. He has been serving as the first vice minister of national economy since April 2017. Dalenov received his degree from Marmara University in Istanbul, Turkey. He began working as a leading specialist at the Ministry of State Revenue in 1999 and had been growing in a career ladder within the ministry up to being the head of Revenues Analysis and Forecasting Department. Between 2002 and 2008, Dalenov led the Current Revenue Department, Analysis and Current Revenue Forecasting Department of the Tax Committee, both within the Ministry of Finance. Then, in March 2008, he was appointed as vice minister of finance.

Gulshara Abdykalikova, former Secretary of State, became a deputy prime minister. She graduated from the Zhambyl Technological Institute with a degree in economics in 1987. Abdykalikova has worked to improve the country’s social protection and labour system and has promoted women entrepreneurship. She started her career as the senior specialist and later head of the Department of Social Protection of the Population of the Kyzylorda region. She also worked as a consultant of the Committee of the Supreme Council on social protection of the population. She served as the Advisor to the President – Chair of the National Commission for Women, Family and Demographic Policy under the President from 2012 to 2013.