By Zhanna Shayakhmetova in Culture on 18 February 2019

ASTANA – The Kazakh National Museum opened the Urzhar Priestess and Restored Treasures: results of conservation and restoration works exhibition Feb. 13 in the capital. The show is dedicated to the museum’s fifth anniversary, reported the Ministry of Culture and Sports press service. 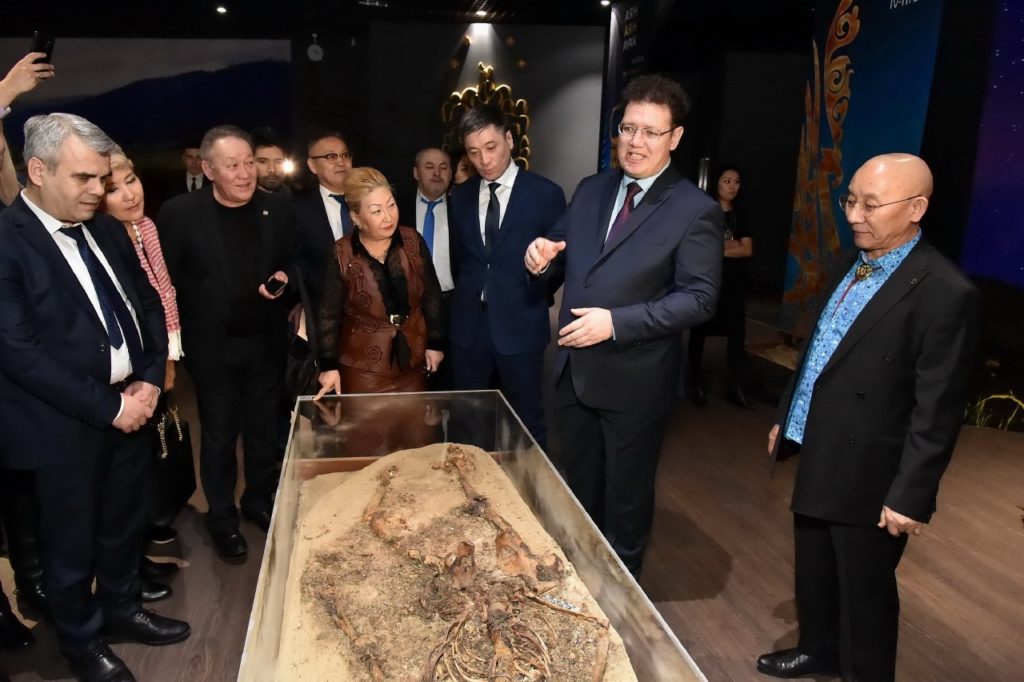 The sensational artefact was discovered during a 2013 archaeological expedition headed by Timur Smagulov in the Urzhar district of the East Kazakhstan region. The remains of a young woman of noble birth were found 1.7 metres underground, in addition to wood and clay pottery, sheep bones and remnants of blue and green clothing. The woman wore gold earrings and a gold headdress decorated with floral patterns and zoomorphic ornamentation.

“The entire exposition is dedicated to the masterpieces of our great steppe. We collected the exhibits from all over the country. The Ministry of Culture and Sports initiated the re-exposition of the hall. The historical finds and artefacts confirm the inseparable connection of our ancestors with the advanced technological innovations of their time and let us to look at the place of the steppe in global history. It is a permanent exhibition. The Urzhar Priestess is of special importance. I believe that the exhibition will attract more visitors,” said Department of Culture and Arts Director Abil Zholaman at the opening ceremony.

Large-scale work to re-expose the halls is currently underway. Unique artefacts from the Auliekol, Ayan Berel, Karakaba, Tasaryk, Tuietas and other mounds are displayed in the hall of gold.

“In addition to the golden man in the Issyk mound and the golden man from the Yeleke Sazy mound, Kazakhstan revealed seven remains of golden men. The achievements of our ancestors impress us. The Urzhar Priestess, of course, is the main exhibit of this exhibition,” said National Museum Acting Director Almaz Nurazkhan.

Conservation and restoration works, as well as reconstructing ancient buildings and objects, are the only ways to preserve archaeological monuments.

The exhibition also presents preserved and restored finds from the Saka to the medieval epochs, including a saddle and quivers from the 8th century, 9th-12th century sword, silk with gold embroidery from the 14th century and a silver harness.