By Saltanat Boteu in Sports on 18 February 2019 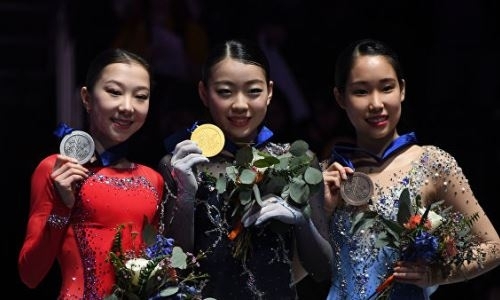 She placed sixth in her short programme, but the 139.37 points in her free programme gave her a combined total of 207.46 points and the second-place finish. Japanese skaters Rika Kihira took the gold with 221.99 points and Mai Mihara, the bronze (207.12), reported sports.kz.

Tursynbayeva fell during her free programme while trying to perform a quadruple salchow (a jump with a take-off from a back inside edge of one foot), but completed her seven triple jumps flawlessly. Her free programme score was her best of the season.

“I started working on the quadruple salchow a long time ago, but then I stopped because of injury. Now, I feel that I am already physically ready. My coaches helped me work on this jump and a couple of weeks ago I began to successfully perform it during training. I included it in the programme only two weeks ago. I will try it on and do it better. This is my goal,” she said.

Tursynbayeva became the first Kazakh athlete to win a medal at the International Skating Union (ISU) championship, according to its website.

Since May, she has been training with the team of renowned Russian specialist Eteri Tutberidze. After the championship, she plans to perform at the 2019 Universiade in Krasnoyarsk, Russia, and World Championships in Japan.

“We plan to participate in the Universiade, where we would like to re-show and perform the quadruple salchow. Then, we will participate in the World Championship. We plan to make a good and serious statement about ourselves. We will not stop training with the end of the season. We will look for a new programme, music and image, learn new elements and sew costumes for new programmes. In the summer, we will gather in Novogorsk,” said team member Sergey Dudakov in an interview with olympic.kz.