By Aidana Yergaliyeva in Nation on 26 February 2019

Mamin, who had been First Deputy Prime Minister, has been leading the interim government, after the President dismissed Feb. 21 the government led by Bakhytzhan Sagintayev over what he termed its failure to improve living standards.

The President suggested the candidacy of Mamin in a Feb. 25 meeting of the Bureau of the Mazhilis (lower house of the Parliament).

“He has the necessary experience – he has worked with me for a quarter of a century,” said Nazarbayev. “Under his leadership a lot was done, especially in the area of ​​infrastructure development.”

Before working as first deputy prime minister for more than two years, Mamin, 53, headed Kazakhstan Temir Zholy for eight years, and had previously been the Akim (Mayor) of Astana and the Minister of Transport and Communications. He graduated from the Tselinograd Institute of Civil Engineering and Plekhanov Russian Academy of Economics.

The bureau members expressed unanimous support for Mamin’s candidacy during the meeting.

“Everyone knew this candidate and, therefore, was happy to approve him in the new position. This candidate has been working with the President for a very long time. The Mazhilis knows him very well. I think that Mamin can handle this position. A lot will depend on him,” said Mazhilis member Alexander Suslov.

“Social policy is the main thing. In order for our people to live better, now the new prime minister will throw all his strength on it. I think that there is a merit of his being able to organise work. I think in this regard the President supported him,” added Suslov.

Later in the day, the Mazhilis voted to approve the candidacy of Mamin for the prime minister. 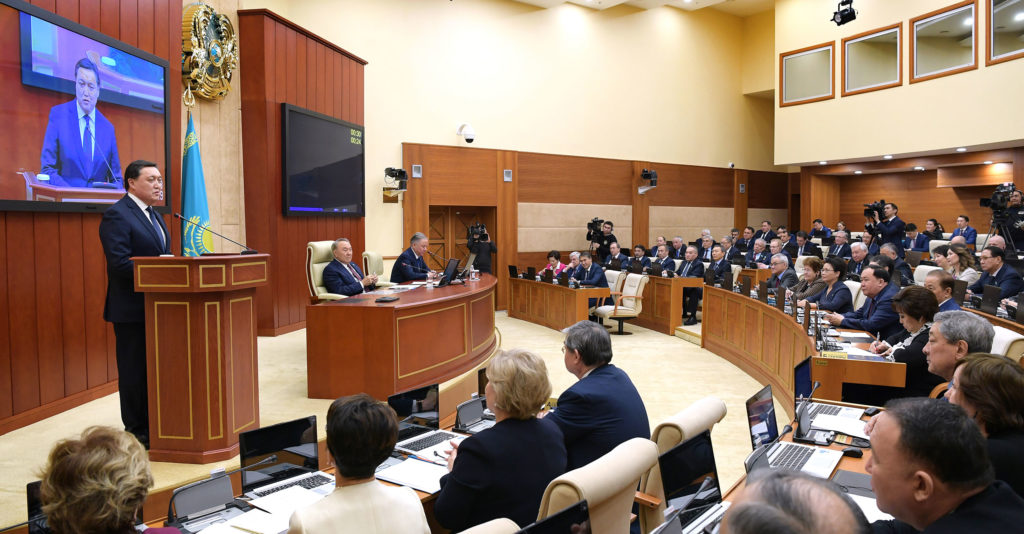 The president is expected to set the main tasks for the government at the congress of the Nur Otan Party Feb. 27 in Astana.

“The government has received all the necessary powers and must clearly fulfil its obligations to the population, be responsible,” said the President.

On the same day, Nazarbayev decreed reorganisation of the government’s ministries to improve the public administration system.

The rest of the functions and powers of the ministry, namely, communications, informatisation, e-government, public policy development in the provision of public services is now among responsibilities of the Ministry of Defence and Aerospace Industry that is also renamed as the Ministry of Digital Development, Defence and Aerospace Industry. The presidential decree appointed former Deputy Prime Minister Askar Zhumagaliyev as the minister in the new governing body.

On the same day, the President appointed the rest of the government as well.

Former Finance Minister Alikhan Smailov became First Deputy Prime Minister and Minister of Finance. Smailov had been an Assistant to the President over the years. Before that, he chaired the national Agency of Statistics. During his career, he was twice appointed as deputy minister of finance.

By his decree, the President also appointed Berdibek Saparbayev, formerly Akim (Governor) of the Aktobe region (see his exclusive interview in that capacity in Opinions), as Minister of Labour and Social Protection of the Population.

Saparkhan Omarov was appointed Minister of Agriculture. Previously, he was the chair of the Committee on Agrarian Issues of the Mazhilis.

Ruslan Dalenov, who had been First Vice Minister of National Economy, from now on heads the ministry.