Kazakh nonprofit coordinates the transportation of more than 3,000 Astana residents with disabilities per year

By Dilshat Zhussupova in Nur-Sultan on 15 February 2019 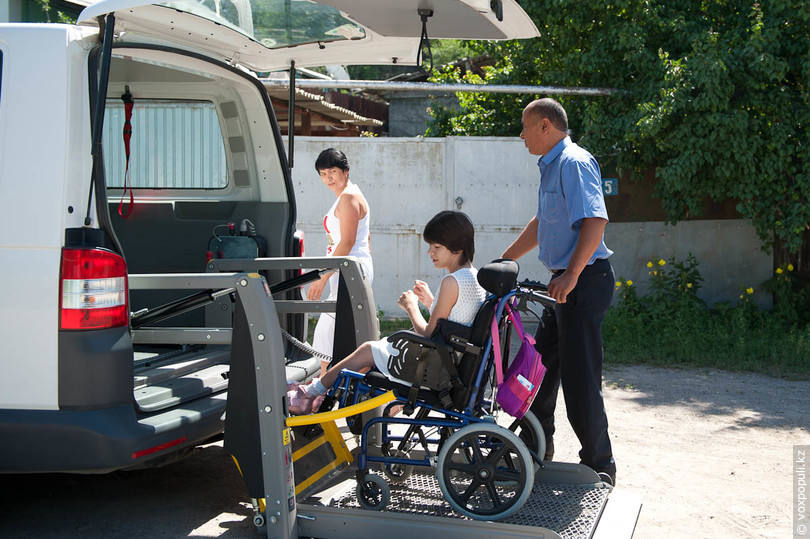 Invataxi acts as a dispatcher to coordinate free transportation for people with disabilities in coordination with other nonprofits. The vehicles are provided by those nonprofits and range from wheelchair accessible cars to modified vans and minibuses with ramps, lifts and hoists.

Citywide, Invataxi is able to coordinate the use of five vehicles for wheelchair users, seven vehicles for people with visual impairments and 11 vehicles for children with disabilities. Among the organisations whose vehicles Invataxi helps coordinate to provide transportation are the Confederation of People with Disabilities, Meyirim and Kazakh Society for the Blind.

Drivers are often trained to assist people with disabilities using their services. More than 670,000 people in Kazakhstan are registered as having a disability.

Invataxi began operating in 2009 when the Saby Charity Foundation purchased 14 vehicles for Almaty’s Society of People with Disabilities. Invataxi began receiving governmental support in 2011 and now coordinates the use of more than 183 vehicles in 20 cities in the country.

“Since 2014, people with visual impairments have also had the opportunity to use Invataxi,” Astana Association of Parents of Children with Autism Chairperson Saltanat Yesmaganbetova told the city’s press service. “Today, people with disabilities can lead a more active life and find work in public and private organisations.”

To use Invataxi services, individuals must make a request to the company’s call centre between 9 a.m. and 6 p.m. and at least a day before commuting so dispatchers may map out routes for efficiency and maximise the amount of accepted requests for rides. Passengers with disabilities must also provide an application form, national identification card copy, disability certificate, No. 035/U certificate and an individual rehabilitation programme document to their local employment and social services centre so that their details may be entered into the taxi service database. Invataxi coordinates rides between 9 a.m. and 6 p.m. on weekdays. The organisation will arrange to pick up individuals and appointed time for transfer to their destination.