By Dilshat Zhussupova in Astana on 16 February 2019 Born in Kobe, Kishigami moved to join his wife in Kazakhstan in 2015. Living and working in Astana since then, he also hopes to open a Japanese café in Almaty.

“Bakery culture came to us from Germany and France. Now, we have more than 100 years of history in baking in Japan, and our bakery style has become unique… Some breads are mixed with traditionally Japanese ingredients, like anko (sweet red bean paste). It is one of the more popular types of bread right now,” he said.

Astana café-goers may try Japanese sweets, as well as hot dishes, at Kishigami’s café. Located at 5 Baitursynov Street at Highvill residence Block D-1, Café Momo is open from noon until 9 p.m. throughout the week and closed on Mondays. The café name refers to a peach in Japanese. 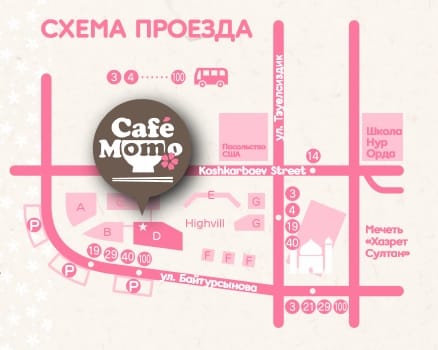 “In Astana, there are very few Japanese restaurants, and they are mostly high-end, expensive restaurants offering sushi,” Kishigami said on how the café came to be. “There are no middle-range cafés where people can eat Japanese food at a reasonable price. I thought it would be interesting to open a reasonably priced café where Kazakh people can see what Japanese people usually eat at home.”

Kishigami serves food made from mostly local products, such as chicken, beef and pork. Only curry sauce, green tea and miso (fermented soybean paste) is purchased in Japan because it is harder to find in Kazakhstan, he said.

“Our menu is basically a home dish menu, the kind which many Japanese mothers prepare at home, even nowadays,” the chef explained. “Our dishes are ordinary ones that we eat daily, it is not a special kind of food. Sushi is considered a special kind of food, since it is not a daily kind of food that Japanese people eat… Sushi at reasonable prices, such as at sushi train restaurants, became very popular only maybe in the last 10 to 20 years in Japan.”