Kazakh President kicks off Year of Youth in Astana

ASTANA – Kazakh President Nursultan Nazarbayev launched the Year of Youth in Kazakhstan during a Jan. 23 ceremony on the EXPO 2017 grounds at the Nur Alem pavilion. He highlighted the importance of housing construction, the creation of new jobs and education development. 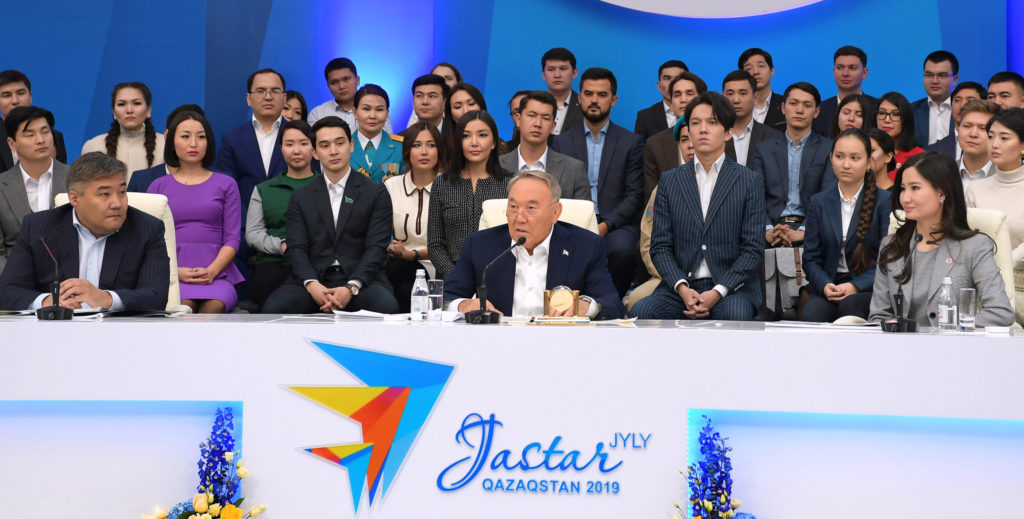 The ceremony began with a live performance of the Kazakh anthem without musical accompaniment. Winners of the 100 New Faces competition, Bolashak graduates, young scientists and business persons take part in the event. Earlier, the Year of Youth logo was presented. According to its authors, it symbolises the flight of a flock of cranes.

The President said that in Astana, Almaty and Shymkent, the government is going to build at least 1,000 rental apartments per year annually for working youth. He highlighted that any company can take part in the programme.

“Today, there are about 300 million young people aged 18 to 30 years in the world who do not have a permanent job or are unemployed. Meanwhile, according to scientists’ forecasts, by 2050 approximately half of the current professions will be replaced by artificial intelligence,” President Nazarbayev said.

“Demand will remain for difficult professions, where artificial intelligence cannot replace people. Scientists, top managers, culture experts, IT experts and doctors are among them,” he explained.

Atameken National Chamber of Entrepreneurs was entrusted to continue work on business education for young people. At that, the government plans to expand the programme of business grant support up to 20,000 grants for young people. Approximately 32 billion tenge (US$84.4 million) will be allocated for these purposes.

The government will also establish a fund to support start-ups created by young people.

The President said he was impressed by the success of young entrepreneurs who presented projects in animal husbandry and food supply at the exhibition.

Nazarbayev added that the availability and quality of higher education will be improved. In addition to 20,000 grants adopted under the Five Social Initiatives from 2018 and 75,000 new places in dormitories, scholarships will also be made available for students who are engaged in volunteering.

The President said that grant funding for projects by young scientists will by increased by 3 billion tenge (US$7.9 million) annually. The development of distance learning and evening education and the promotion of the Open University project were also presented at the exhibition. In terms of the level of youth education, today Kazakhstan is ranked 15th in the world and 9th in literacy level.

President Nazarbayev also discussed the Zhas Maman (Young Specialist) programme, involving the modernisation of educational institutions in all regions. In each area, one top university and ten top colleges should update their technical base, invite foreign professors and raise the level of teaching to the international level. More than 60 billion tenge (US$158.2 million) will be allocated for these purposes annually.

The Zhasyl El (Green Nation) movement will be used to launch Green City – Green Village programme, involving the planting of greenery in all settlements of the country, both cities and villages.

Along with this, the government is going to develop the student construction movement, which will be used in large construction projects, especially in the construction of a new centre of the Turkestan region.

The President highlighted the importance of healthy values, loyalty to the best traditions, the sense of respect for elders and ability for mercy and compassion among young people.

According to him, Kazakhs should not have lonely old men and abandoned children. Young people should take care of their parents and be responsible for the children, including, through adoption.