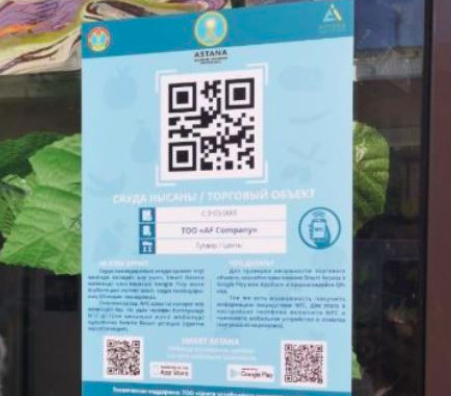 The programme “1000 places – street trade” has facilitated small and medium-sized business development and streamlined street trading in the capital since 2016. To participate, entrepreneurs may submit a land plot application and, upon permission, rent small plots of land for 20,000 tenge (US$53.96) per square metre annually for a period of seven years. Now, these businesses will additionally be assigned QR codes.

QR codes are readable by machines, usually storing information accessible by a smartphone camera scan. These codes will allow any inspector, police officer or city resident to view and verify Astana street traders’ information, such as their legal entity name, lease agreement number and land plot location and purpose, using a smartphone or tablet. A special near-field communication tag will prevent fraudulent QR codes, and code violations may be reported to Social Entrepreneurship Corporation Astana through the mobile application Smart Astana.

This initiative is a step toward the capital’s effort to enter the world’s top 50 smart communities, a task set by Kazakh President Nursultan Nazarbayev in 2013. Additional city initiatives include the Smart Astana project, which incorporates technology-driven solutions at schools, hospitals and street lighting. Astana residents and guests have been using its mobile application for everything from making a doctor’s appointment to ordering a taxi since 2016.

Here, smart technology use will prevent illegal street trading in the capital.

“The absence of a QR code at a facility means that the trade facility has not been installed as part of our programme. That is, it was either installed illegally or on private property,” explained a Social Entrepreneurship Corporation Astana representative, reports the Astana Akimat (city administration) press service.

Social Entrepreneurship Corporation Astana, “not being a state body, regularly informs the authorised state bodies on illegal street trading as part of its land plot monitoring,” noted the company’s representative. Concrete measures on trading activity are conducted exclusively by authorised state bodies, including the city akimat and department of urban environment control and quality.