On the eve of the 27th anniversary of our independence, Kazakh children tried themselves in diplomatic shoes. Two months ago, the Ministry of Foreign Affairs launched the Jas Diplomat project. It intended to introduce the children of Astana schools to Model United Nations (MUN) and the process of creating diplomatic relationships with other UN members. To embody the latter, project organizers invited embassies of seven countries to work with the children. Those included the embassies of Brazil, Georgia, Germany, Japan, Poland, South Korea and Turkey. So, since October, the children had been working with the ambassadors of the assigned countries, learning about their culture and, most importantly, resources, because the project topic was renewable energy. 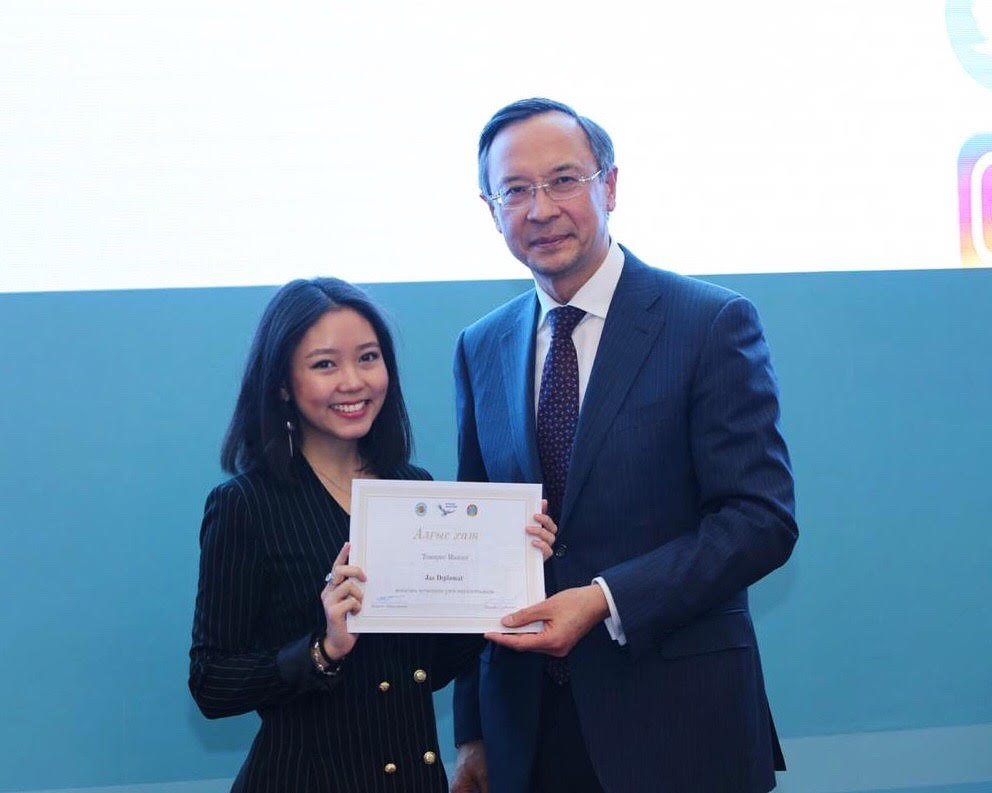 As a Nazarbayev University student, I learned about the project in November via email. The project organizers were looking for volunteers who would help with the embodiment of the main project goal, the MUN conference. MUN is a simulation of real United Nations sessions. Participants need to represent a certain country and, based on the country information, should have a strong position on a particular topic. Basically, the delegates advocate their country’s interests and together with other participants come to a consensus. In this case, the consensus is a resolution, a paper which includes all the discussed points in the official UN format. Honestly, I was extremely lucky to have obtained my first MUN experience just a couple of days before I got the email! Therefore, I did not hesitate to offer my help to the project and I started my journey.

I would call my role in Jas Diplomat a pro bono consultant on MUN details. Having joined the project in the second half of November, I had my first meeting with the project coordinator, Aisha Mukasheva, at the end of the month. I briefly told her about my experience and we discussed my view of the conference. I then picked a school to work with – lyceum No. 48. Fun fact: the project participant schools were all supposed to be gymnasiums, because, I guess, gymnasiums are thought to have a social science/humanities bias, in contrast to lyceums with a mathematical bias. The school I was consulting, thus, was the only lyceum. Another fun fact was that “my” children were the youngest there – among all the high school students; they were the only 8th and 9thgraders. I then learned that they were representing Japan and it was a significant advantage, since Japan is on its way to adopting green energy technologies. My only concern was the language of communication with the children – I was worried because they study in Kazakh, while I graduated from a Russian-language school and my Kazakh would be too poor to explain what MUN is. However, my worries were needless; the children I worked with are multilingual and talented in three languages. They deserve being praised, don’t they?

On Dec. 5, I met with the delegates from school No. 48. After the meeting, I asked them to write a position paper, the main document MUN participants rely on. It comprises everything, from the background information about the represented country to treaties signed with the UN. Most crucially, a position paper contains a proposed direction for development with solutions leading directly to it and of the whole paper, the position and solutions part is the only one to be read at the conference. The remaining information is, as I explained to the children, for delegates to have a word to add during the discussions.

I was guiding the children based on my own MUN experience. In my first and, for now, only conference, I was representing Canada. Relying on my position paper, I thought I was ready for the opening speech, but I failed it! The conference chairs (those who lead the discussions and give the right to speak) went by alphabetic order to listen to opening speeches and as the delegate of Canada, I was the first to speak. It turned out, the delegates have just one minute to speak and while I was thanking the honourable chairs and fellow delegates, my time expired. Therefore, rule number one for “my” children was a concise and precise position. The second rule was – it actually did not matter. They are just school children and when I was their age, I did not even know about MUN, not to mention participating in it. And of course, I was helping them to write the position paper.

My impressions from writing a paper with them are twofold. From the one side, I was amazed by their language abilities and high motivation; but from the other, I did not expect them to do everything just before the deadline! Earlier, I used to think of procrastination as a feature of university students only, but I noted that nowadays children also need to learn timemanagement. Within the framework of the project, we had two official conferences, on Dec. 8 and 13. Can you imagine that “my” children started working on the paper the night before the conference? I was impressed by their courage and confidence, too.

Both conferences were held in the building of the Ministry of Foreign Affairs. The idea of having the first session was to test the process and decide on a draft resolution. Despite being the youngest, my children were among the most prepared delegations. Some of the delegations, unfortunately, were completely unprepared, but after a while they joined the discussions. As for me, the most difficult part was to hold myself back when I had an interesting point to tack on the discussion, but I could not add it because I was not the delegate. As I noticed, the participants got excited about MUN during the process itself, but as children, they were more excited about the coffeebreak. Before we left for lunch, the children, together with the chairs, chose the topics to be raised in the main session five days later.

What I like about children is their ingeniousness! In the course of the discussion, two delegations, of Brazil and Japan, had an argument over who would be presenting the resolution. How do you think they resolved the argument? Rock-paper-scissors! The Japanese delegation was lucky enough to win and present the resolution. However, it also meant that they had to contribute significantly to the resolution and translate it into Kazakh and Russian, because the official MUN language is English, but not all the guests would understand it.

Within the next few days we worked hard to produce a decent resolution which was then edited by the co-chair and masterfully translated by the children themselves. In the main session, attended by Foreign Minister Kairat Abdrakhmanov, diplomats and mass media, everything went smooth. Every delegation had its order to speak and the speeches were not as spontaneous as before. As a spectator, I noticed a couple of slips during the session itself, when children forgot to take the initiative to speak. At that moment I regretted again that I was not a delegate myself, but the chairs managed the situation. After the closing ceremony and awarding, we had a chance to talk with the embassy representatives. For me, the feedback from the Japanese diplomats was an important measure of success and fortunately, they were satisfied with the speech my children gave, noting that they stated all the right points about Japan.

Overall, Jas Diplomat provided me with an inspiring experience: I decided to continue my participation in university MUN sessions. It was a pleasure to work with the children and be part of the very first MUN conference for school children in Kazakhstan. MUN is widely practiced among middle-schoolers around the world and I am glad it has now been introduced in Kazakhstan, too. My final suggestion is to engage other regions of Kazakhstan as well, because I believe that all children should have equal opportunities for growth and self-development, especially in such an exciting way.

The author is a second year student in sociology at Nazarbayev University.