By Saltanat Boteu in Nation on 24 December 2018

ASTANA – Beginning in January, the Tandau Foundation’s Dostupnyi (Accessible) Pavlodar project aimed at making public spaces accessible for those with limited mobility will expand throughout the country as a part of Inclusive Kazakhstan project. The project is aimed at protecting and enforcing the rights of persons with disabilities to free movement and equal access to facilities and services according to international standards. It allows individuals to engage in social life and gain access to medicine and education, noted foundation head Irina Bobkova. 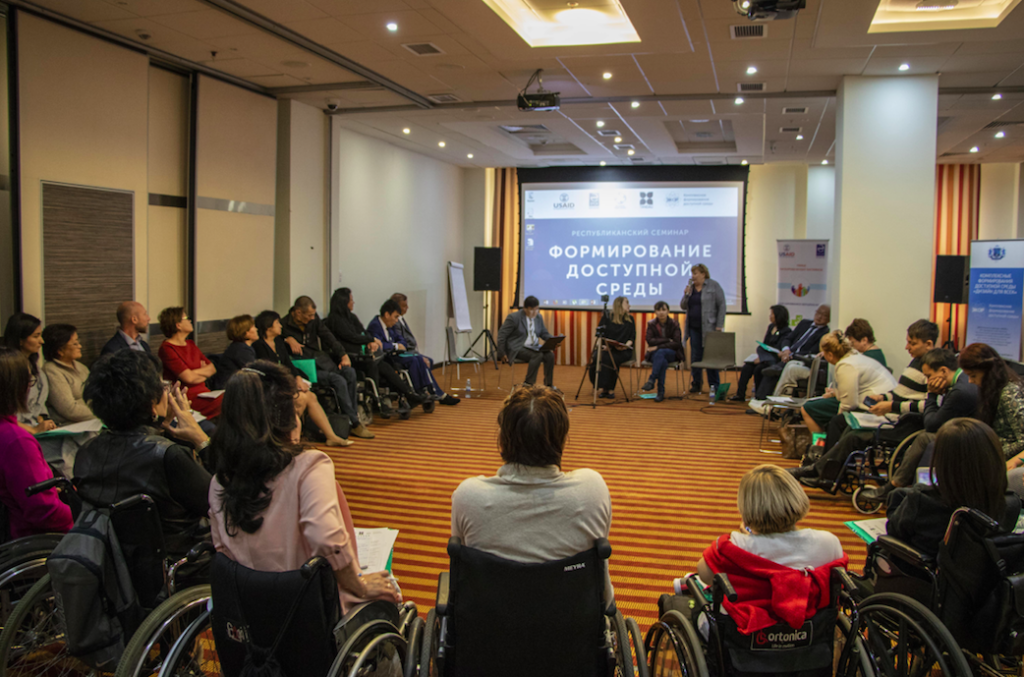 The pilot project, started in 2015, was implemented in cooperation with Eurasia Foundation of Central Asia (EFCA) and funded by the United States Agency for International Development (USAID).

The project “Inclusive Kazakhstan” will be implemented by EFCA in partnership with Tandau Foundation and Erekshe Tandau Shelek Foundation and will involve 19 organisations in 17 cities, with the majority of funding for 2019-2020 provided by the European Union (EU). The project’s budget is $357,544; the EU will contribute $339,701 and the regions will be provided with $3,367 per organisation. 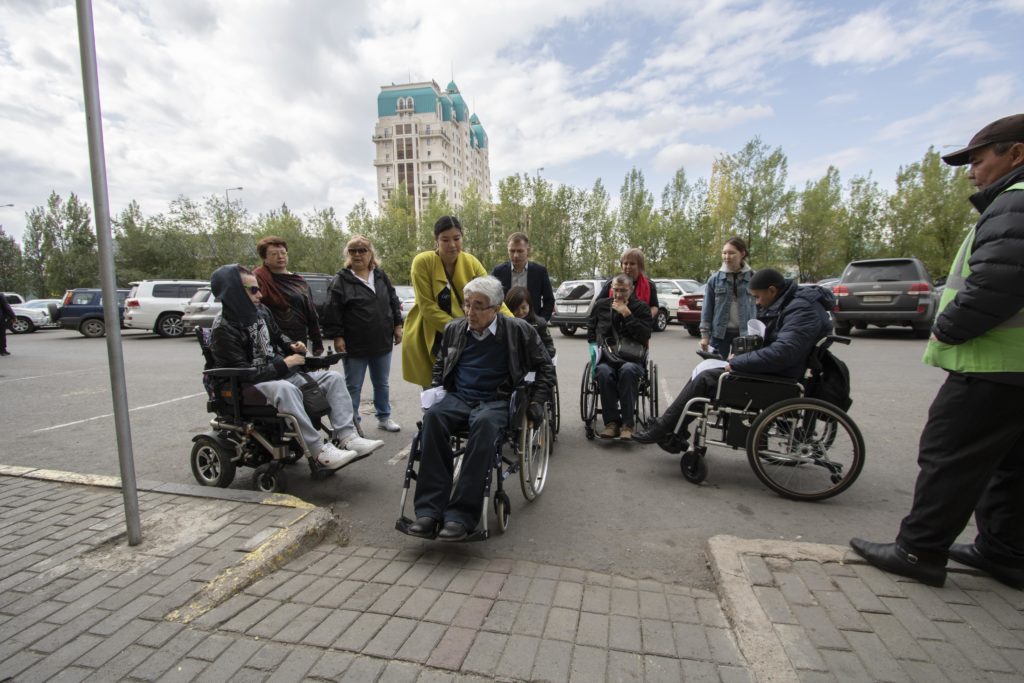 Regional groups will work with volunteers and active citizens, monitoring the availability of facilities and services and providing advocacy, information campaigns and roundtables.

“[In each region, we] need to have one person (employee) who will be trained and will train volunteers. A person will advocate for accessibility in the region, which means to hold meetings with the akimat (regional administration) and trainings for the facilities’ owners. We will explain to the employee how to make it efficient, not spending funds on [certain things], because we found many free spaces [for holding events] in Pavlodar… It works across Kazakhstan. Akimats are able to offer free spaces and transportation,” said Bobkova. 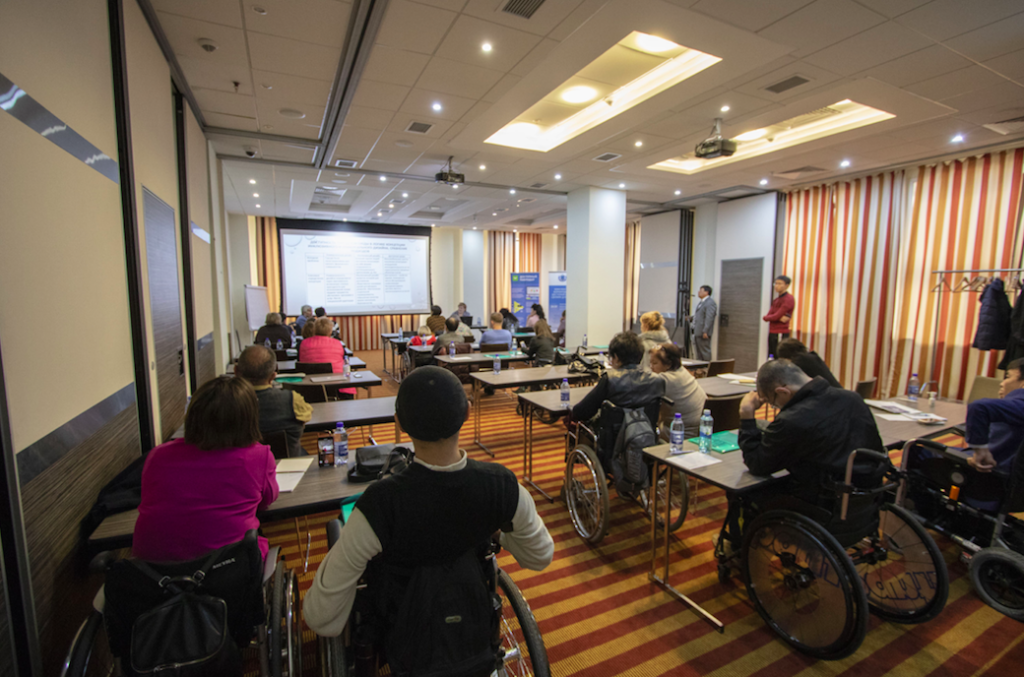 The project covers regional centres, the capital, Almaty and Shymkent cities, but the map is not limited to them.

“In fact, the map can be filled out anywhere, but resource centres (partner organisations), which can give a final statement about adaptation of the objects, will be in these 17 cities only,” she noted.

The Tandau Foundation and the EFCA can attract other sponsors to develop the maps in the villages and regions not included in the expansion. Partner organisations in each region will compete for selection based on the resource centre’s experience in the area.

“We will announce competition for non-governmental organisations and initiative groups… But we need the organisations that already know the field of accessible environment… They should be working in their region on this issue. They will be trained, but they should have basic knowledge,” she said.

The project is currently shown on Pavlodar’s online map using four different icons to indicate the accessibility of public facilities and services for those with restricted mobility. The international traffic light system marks a spot’s accessibility in red (not accessible), yellow (partially accessible), green (accessible) and blue (accessible for people with hearing impairments and visual disabilities). The map helps people to move and orient themselves in public spaces. Anyone can augment the map on the project’s website (dospav.kz) using the “add an object” button.

“We mostly try to fill in accessible and partially accessible objects on the map, so that the map can help people to engage in social life,” said Bobkova.

The project also aims to collect reliable and precise data about accessible areas for social needs and research purposes.

“The whole project is not only about the map. The map is an instrument of monitoring. The government can give statistics (information) about the objects that have passports. It is when a social protection specialist made certifications listing all accessible objects. Currently, there are 30,000 objects with passports… But there are no statistics on non-accessible objects. The map will show the conditions across Kazakhstan,” she added.

The project has attracted volunteers, who for the first two months will update the information on the maps. People are also encouraged to complete applications for governmental institutions to improve accessibility.

“In our laws, the checkups and fines are made only from the applications (complains) from the citizens. Before 2015, when the object was put into operation, the committee with members with disabilities came and checked it for accessibility… Beginning in 2015, these committees were dissolved… If the object is not accessible, the governmental institutions are not able to know that; thus, people should write complains,” said Bobkova.

The application can appear complicated the first time and the foundation encourages users to ask for help and recommendations. The online form automatically lists the necessary information in the correct order.

“We made an automatic template of this application. We also recommended governmental institutions to make changes on e-gov.kz, because there was no opportunity to file a complaint with specialised state bodies that receive complaints about inaccessible objects, as there were no such body  identified on the list of state bodies that could be addressed. People had to bring the hard copy or send it by post… After our recommendations, these institutions have been available on e-gov.kz since August,” she noted.

After completing the application and attaching a photo, it can be downloaded as a .pdf document and sent through e-gov.kz.

The phrase “people with limited mobility” is key for understanding the importance of accessibility, said Bobkova. At certain times in their lives, many people become members of the restricted mobility group.

Accessible environments influence other areas of people’s lives, such as education, healthcare, entertainment and quality of services.

“The right to access is intertwined with other human rights. For example, if you want a higher education but the university is not accessible, you cannot study… Distance learning or working are possible, but there should be a choice… it is about socialisation,” she added. “We went to a hospital in Almaty. They started to improve accessibility for people with hearing impairments. The hospital employee said that before they implemented the equipment, seven people came to the hospital; currently, [there have been] approximately 50 and this is in half a year.”

To improve accessibility, those who are interested should work in cooperation to elevate their challenges and recommendations to the discussion level.

“Although there is criticism, the Kazakh Labour and Social Protection Ministry is working hard to change the situation. It is also important that the initiative and understanding of the changes come from the bottom up, from citizens,” said Bobkova.