By Saltanat Boteu in Business on 17 December 2018

ASTANA – Kazakhstan exports products to 110 countries, said President Nursultan Nazarbayev during a Dec. 11 national teleconference in the capital. He spoke with 28 enterprises from different fields and regions and launched production units in alternative energy, agriculture and metallurgy. 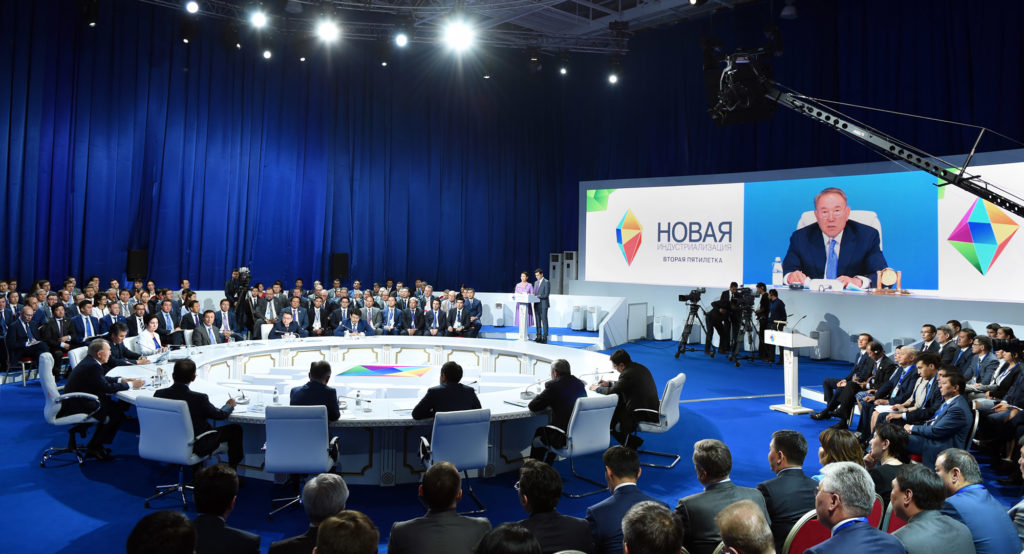 “Our key markets are China, Russia, Central Asian countries and the European Union. In recent years, we began to produce more than 500 types of products that have never been produced in Kazakhstan before. We export about 50 new types of goods. Since 2009, the volume of production in the manufacturing sector has increased more than three times,” he said.

The head of state emphasised that according to 2017 results, production volume was nearly 9.5 trillion tenge (US$25.65 billion).

During the teleconference, Nazarbayev also launched dozens of new high-tech industries, reported strategy2050.kz. In the engineering and construction industries, he initiated rail wheel, transformer and cement facilities that previously did not exist in Kazakhstan.

In the alternative energy field, the nation opened the largest solar power station among the Commonwealth of Independent States (CIS). Samruk Kazyna United Green has commissioned the Burnoe solar power plant, a joint Kazakh-British project in the Zhambyl region with a capacity of 100 megawatts.

“It is a very important production not only for us, but for the whole world. Recycling of garbage today is a very profitable business in which we are not yet engaged,” he said. “It is good that it started in Almaty, the largest city and a metropolis that produces the largest amount of waste. This experience needs to spread to Astana and other cities.”

Beginning next year, domestic plants will be processing more gold, with Kazakhstan aiming towards an annual production of 85 tonnes. The mining and processing complex is capable of producing up to 10 tonnes of non-ferrous metals per year. For the next nine years, plans show open method mining for gold-bearing ore using new technologies.

“[Eighty-five tonnes of gold per year] is a huge indicator. The bulk of the gold will be used domestically. The cathode copper of the Karaganda plant will be exported,” said the President.

In the agricultural sector, Karat Poultry Farm, with an automated mill in the Atyrau region with a capacity of 50,000 tonnes of meat per year, and the Torgai Et meat-processing complex in the Arkalyk city were commissioned.

Nazarbayev believes agricultural products will always be in demand. Mareven Food Holdings built a complex in the Almaty region to process flour and produce food and in the Turkestan region, Golden Camel Group will process camel and horse milk for export.