By Malika Orazgaliyeva in International on 17 December 2018

ASTANA­ – Students from seven Astana schools and representatives from seven diplomatic missions gathered Dec. 13 at the Ministry of Foreign Affairs to finish preparations for the final meeting of the model UN, titled Future Energy. 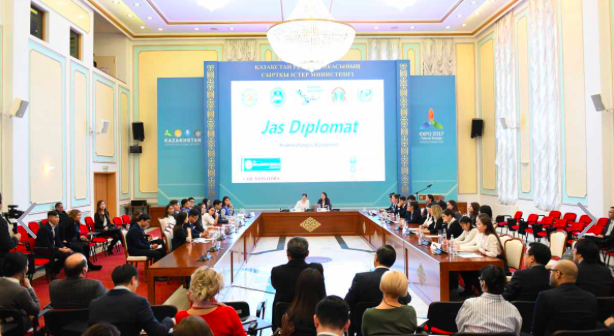 The preparations were part of the Jas Diplomat educational project under the national Rukhani Zhangyru programme. The programme seeks to instil the importance of education and universal values.

At the final preparation event at the foreign ministry, the students represented the countries of the diplomats with whom they had worked on the project. The moderators were the students of the Nazarbayev Intellectual School of Physics and Mathematics in Astana. Following an intense debate, students adopted a general resolution on the development of renewable energy sources.

Minister of Foreign Affairs Kairat Abdrakhmanov addressed the students, noting the importance of the project in the Year of Youth and saying he hoped the project would spur them to continue their self-development.

The project was initiated by the foreign ministry in cooperation with the Astana city administration, the Ministry of Education and Science and the Coordination Centre of the Model UN.