By Aidana Yergaliyeva in Nation on 20 December 2018

ASTANA – Kazakh President Nursultan Nazarbayev congratulated his fellow citizens on their Independence Day and summed up Kazakhstan’s progress as a sovereign state at a Dec. 14 gala dedicated to the holiday. 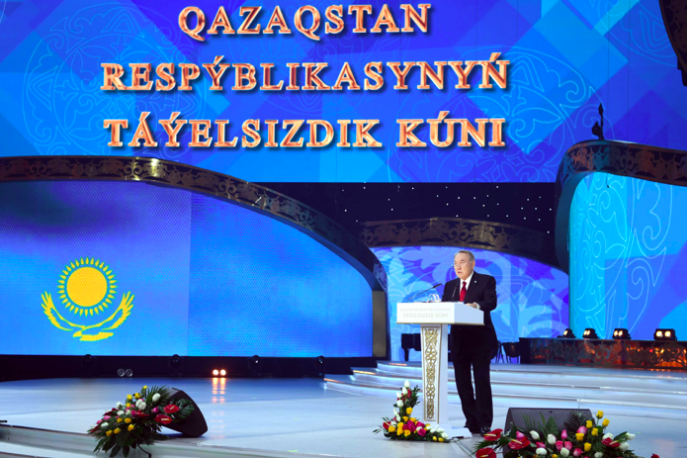 It has been 27 years since Supreme Council adopted the Law on Independence and State Sovereignty of the Republic of Kazakhstan on Dec. 16, 1991.

“We are witnesses and active participants in the birth and formation of a new Kazakhstan,” said the President, according to the Akorda press service.

The young nation has been growing and developing steadily, and is often referred to as “the leading Central Asian country.”

Today, Kazakhstan is an active member of the international community and is striving to join the ranks of developed countries.

The welfare of the population has significantly improved in the decades since independence. For example, the number of people paid lower than the subsistence minimum has dropped by 15 times and real wages have quadrupled.

Other notable indicators include an increase in the absolute population to more than 18 million people and an increase in life expectancy to 72.5 years.

“It is important for us to always remember that the foundation of all achievements is unity and harmony in society,” the President stressed. “The Kazakhstan model of interethnic and interfaith development has become an international brand of the country.”

Kazakhstan’s location and its decision to invest in transport and logistics infrastructure has helped it become a main transit link between continents, he noted. Large-scale market reforms have engaged one million citizens in entrepreneurship.

This year, Kazakhstan has launched a number of initiatives aimed at boosting the economy further, among them the Astana International Financial Centre (AIFC), the Astana Hub international techno park of IT start-ups and the International Centre for Green Technologies and Investment Projects.

“All these important victories and triumphant results convincingly testify to the correctness of the course we have chosen,” said the head of state.

The state is currently focused on further improving the quality of life, public security and well-being of the population, he stressed.

“An important direction for us is the comprehensive modernisation of the social sphere. For all the years of independence, about one million Kazakhs have found their hearth and a roof over their heads,” said Nazarbayev.

In the next five years, the government plans to build more than 70 million square metres of housing that will accommodate almost 2 million citizens.

The head of state believes that the modern generation, born in independent Kazakhstan, will confidently meet the challenges of their times and ensure the well-being and prosperity of their fellow citizens.

Astana, “a symbol of prosperous Kazakhstan,” had its 20th anniversary this year. In the new capital, events to celebrate independence began Dec. 6 and some exhibitions will continue until the end of December at the Palace of Independence.

The days between Dec. 10 and Dec. 18 were especially rich with exhibitions, lectures, film screenings, festivals, fairs, concerts and traditional fireworks dedicated to the national holiday.