By Saltanat Boteu in Astana on 18 December 2018 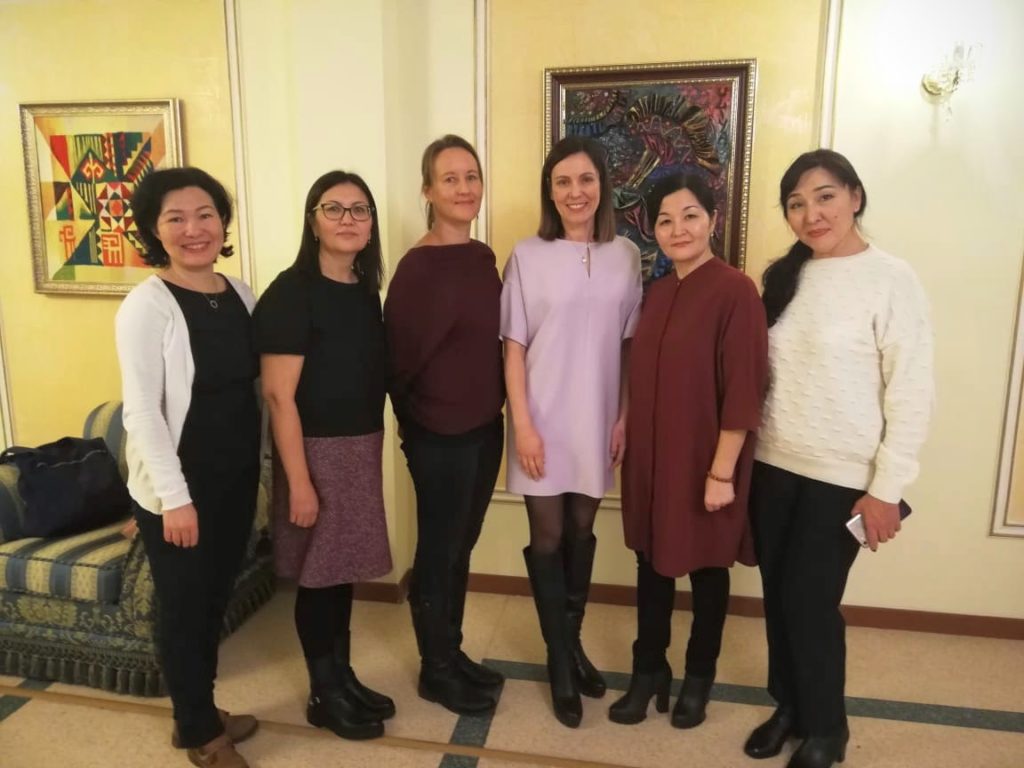 The ASA made agreements with most of the beneficiaries. Out of 70 applications, 40 were chosen to receive funding.

“Today we are making agreements with the organisations and people that we have decided to help until now. Then we will continue our work in January again. The number of beneficiaries is close to 40, but we will have some more,” said Charity Committee Chair and the Finnish Ambassador’s spouse Maria Kivikoski.

“When we started to select the projects to support, we started from basic needs, such as food, clothes and basic household appliances. We made it our first priority helping low-income families. Then (funds are also directed to providing) special equipment for children with disabilities, such as rehabilitation bicycles,” added Kivikoski.

The beneficiaries of the funds are non-governmental charity organisations that are helping people with illnesses and physical and mental disabilities.

For the Spina Bifida Public Association, the ASA is going to purchase articulated links for the exoskeleton that helps people to verticalise and walk.

“We have children with disorders of the human musculoskeletal system. And we appealed to the association to fund the purchase of articulated links for an apparatus that gives children the opportunity to verticalise and walk. It’s like an exoskeleton, but not a robotic plastic version. It is not produced in Kazakhstan. We want to make three of them with the association’s support and promote its production in the country. Our medical specialists can do this, but spare parts are very expensive. Parents who purchase this apparatus in Russia usually spend about 700,000 tenge to one million tenge (US$1,890 -$2,700),” said Spina Bifida Public Association President Arailym Kumarzhanova.

For the ORDA Public Association of the Parents of the Children with Autism, the ASA helps to equip the rehabilitation centre’s space for $1,890.67.

“We are engaged in the rehabilitation of children with autism and children with neuropsychiatric disorders such as Down syndrome, children with hearing and visual impairments. We have a centre for the rehabilitation for more than 200 children. We receive funding from the ASA the second year to equip our centre. This year we expanded our office. Therefore, we need to buy sports equipment, furniture, developing equipment,” said ORDA Public Association Representative Saltanat Yesmaganbetova.

According to Yesmaganbetova, 85 percent of their children have improvement and start to speak and adapt to society.

The other beneficiary, Karabekov Public Fund gets funding for production of special pants for newborn babies for the treatment of hip joints for $1,350.

“Our fund helps low-income, large families and families with children with disabilities to get to the reception of a paediatric orthopaedist. The reception might be expensive. The orthopaedist helps to diagnose the issue in a timely manner, so that the children receive ultrasound diagnostics and timely treatment of the hip joints,” said Astana Medical University Professor and Karabekov Public Fund founder Roza Karabekova.

She invented knitted pants for newborn babies that they can wear from 2 days age for the hip joints treatment.

The Mama Pro Public Fund received $1,053 for furniture and quartz for rooms sterilisation.

“We teach moms business and computer literacy. Our office is like co-working space. While moms are studying, children play in the children’s room. Recently, we had a presentation, and we invited ambassadors’ wives and showed them our office and how we work. They met our mothers. The ASA sponsored children’s room furniture and quartz. We got 390,000 tenge (US$1,053) and we are very happy that we got attention, because there are many applications,” said Mama Pro Public Fund president Gulsum Semenova.

According to the ASA partner in the organisation of the bazaar and information support, Chair of the National Council of Women Khanzada Baltayeva, the ASA also sponsors individuals and hospitals to buy special equipment for diagnostics and treatment.

“This year, the ASA bought equipment for Children’s Department of Oncology Centre in Almaty. These are the chairs on which children receive chemotherapy, hemodialysis. Also, the ASA helped to buy an enhanced comfort wheelchair for a young man who lost his legs at 13 years. Now he is 20,” she said.

The process of choosing beneficiaries is not easy, said Baltayeva. Every year the ASA gets many applications from different organisations and individuals. In her opinion, the local partner organisations’ duty is also to give diverse informational support to indicate most important spheres for funding.

“We chose clinics that work with seriously ill people where the clinic’s budget is not sufficient. We have a good experience of working with the National Children Rehabilitation Centre in Astana, which annually helps to,200 children across Kazakhstan that include medical, psychological help, swimming, work therapy, development of social skills for adaptation in society,” she said.

The organisations listed are open and encourage people to communicate and ask for help from them.