By Dilshat Zhussupova in International on 27 November 2018 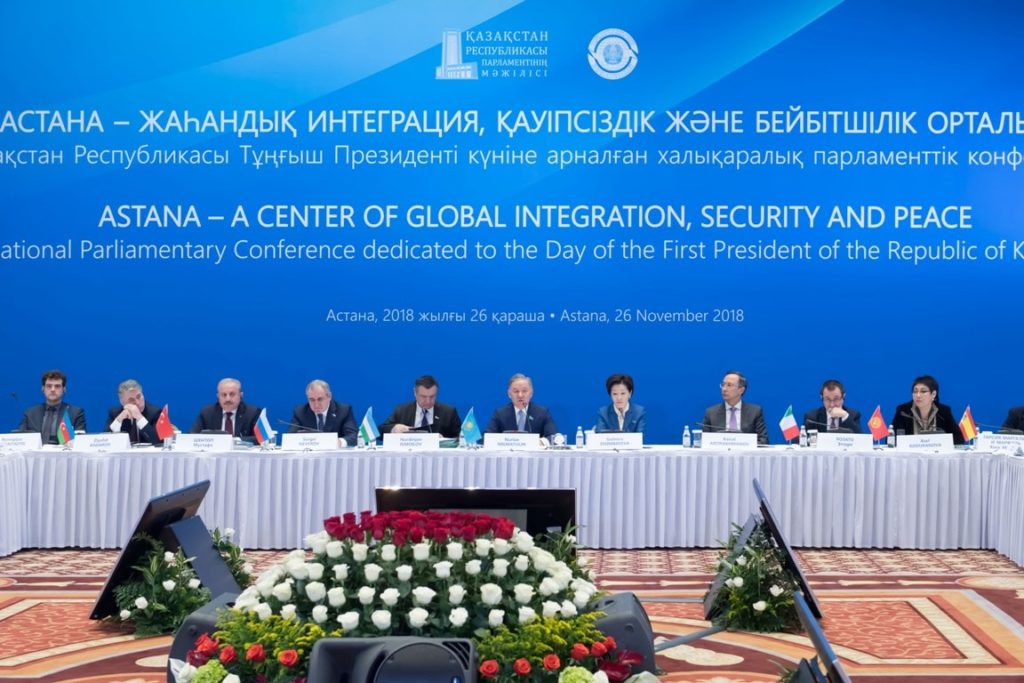 The conference was organised by the Kazakh Mazhilis (lower house of Parliament), supported by the Ministry of Foreign Affairs and dedicated to the Day of the First President, assembling high-ranking parliamentarians from Azerbaijan, Italy, Kazakhstan, Kyrgyzstan, Lithuania, Russia, Spain, Turkey and Uzbekistan.

Speaker of the Mazhilis Nurlan Nigmatulin began the event by praising Kazakhstan’s new-found role as a centre of security and peace and a global gathering place for discussions on realising political and economic initiatives.

“Under the President’s leadership, Kazakhstan has come a long way since independence from being a peripheral state of the former Soviet Union to a full member of the world community, enjoying its well-deserved authority and respect, and a responsible partner in addressing global and regional problems,” he said.

Nazarbayev’s accomplishments include promoting the idea of Eurasianism, leading vast economic reforms, which have attracted more than $300 billion of foreign direct investment, facilitating peace dialogues via Kazakhstan’s chairmanship in the Organisation for Security and Cooperation in Europe (OSCE), membership of the United Nations (UN) Security Council and the Astana Process on Syria as well as advancing modernisation initiatives, such as the recent article “Seven Facets of the Great Steppe.”

“The article not only provides for the prospect of modernising our society’s historical identity, but also allows for a fresh take on the history of world civilisations,” said Nigmatulin.

“In his article, the President emphasises the main role of the Silk Road and notes that it is the cradle of the Turkic world. This area is currently a bridge between the East and West and, in this way, Central Asia unites Turkey and Europe. Therefore, we believe that Kazakhstan plays a role of great importance,” added the Turkish Grand National Assembly Deputy Chairperson Mustafa Şentop.

Nazarbayev will continue cementing Kazakhstan’s unique role in the global community as Astana will host a forum for parliamentarians of Asia and Europe in September 2019, which will coincide with the 25th anniversary of the idea of Eurasian integration.

“Direct multilateral dialogue between the leaders of legislative bodies of Eurasian states will contribute to solving the current problems faced by European and Asian countries,” said Nigmatulin, expressing confidence the forum will strengthen trust and understanding among the two continents.

“There is indeed a legacy of regional cooperation among Central Asian states since their independence,” said Nilsson. “Today, we see a new impetus for regional cooperation emerging in Central Asia and key drivers are the increasing prospects for continental trade, reform processes taking place in Kazakhstan and Uzbekistan and the changing role and perception of Afghanistan in the region.”

The report analyses historical and recent trends in regional cooperation, also identifying opportunities and obstacles by drawing on the experiences of the Association of Southeast Asian Nations (ASEAN) and the Nordic Council.

“ASEAN has enabled its members to approach foreign great powers as a unit rather than individually. The organisation has also coordinated members’ economic and trade policy, fostering considerable growth in Southeast Asia. The Nordic Council, on the other hand, has shown that regional cooperation can function successfully even when members have very different approaches toward larger integrational structures,” the scholar said.

“Cooperation needs to be gradual and flexible to involve all Central Asian states. Of course, the largest economies of the region – Kazakhstan and Uzbekistan – are indispensable in regional cooperation but models also need to fit smaller states – Kyrgyzstan, Tajikistan and Turkmenistan… The most important point is that membership in these institutions of cooperation should be exclusively Central Asian – it should not be open to external powers. This is to provide a platform through which Central Asian countries can conduct a dialogue with foreign powers as a unit,” he concluded.