By Aidana Yergaliyeva in Culture on 19 November 2018

ASTANA – Painter Adilgali Bayandin, a member of the Union of Artists of Kazakhstan, classifies his works as abstract realism, a seemingly oxymoronic term that makes sense only after one sees his work. His favourite genre is historic romanticism, for many of his paintings transport the beholder to the romance of the nomadic lifestyle. 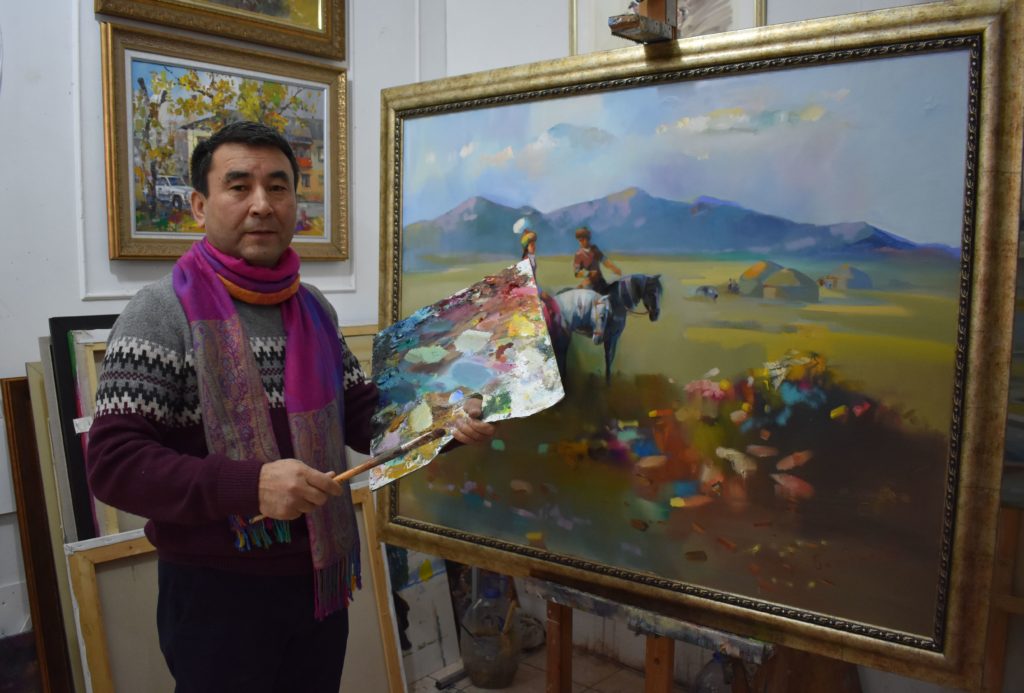 “Kezdesu” (“Meeting”) conveys the story of a young couple on horseback, as he put it, “being drunk in love” in the Kazakh steppes with the bustling atmosphere of a traditional nomadic household in the background. The realistic scenario is infused with elements of abstract art that make it especially vivid and vibrant. The contradiction of abstract realism has become his signature.

In addition to his scenic paintings, Bayandin is also recognised and praised for his portraits. He is especially proud of his paintings of Bauyrzhan Momyshuly (a Kazakh-Soviet military officer) and Kazakh composer Shamshi Kaldayakov, as well as several portraits of his students.

“A portrait painting requires strenuous effort. A painting should depict the character of a person, his or her inner world,” he said. 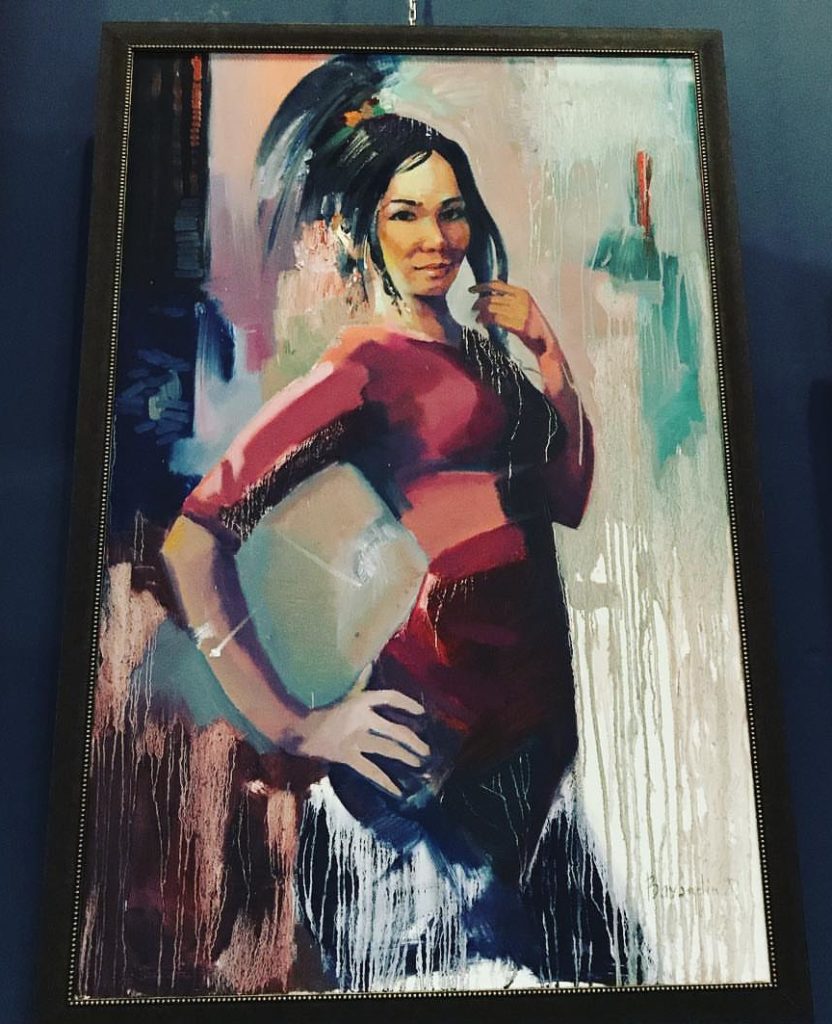 His portrait of Kazakh fashion designer Dinara Satzhan holds a special place in the artist’s heart. Bayandin noted he was able to see and show her creative inclination long before she started to make a name in the industry.

His ultimate source of inspiration is music, as he feels melodic composition and painting have many similarities.

“First of all, I work with colours. I try to reveal the secrets of colours. It is closely correlated with music. A colour has its tonality. If you misplace a single note, then the whole sound gets spoiled. Similarly, if you misuse a colour, it will disrupt the harmony and leave you with a sense of incompleteness,” said Bayandin.

He is also influenced by poetry and nature.

“Once I read a poem and just in a few words the poet phrased the thought that I couldn’t express in my painting for weeks. Then, I was inspired and drew it right away,” he added.

The process of inspiration is reciprocal for those in the art world, as Bayandin recalled composer friends who would write music moved by his paintings. He believes poets, composers and artists should create a hub where they could more closely interact.

Creating such space and, thereby, supporting artists is important, as art has often been the source of human progress, change and innovation. Leonardo Di Vinci’s “Mona Lisa” not only altered art practice, but elevated the role of women in the medium. Banksy’s “Les Mis” raised questions of people’s power and political pressure. Art dictates fashion, questions politics and raises social problems, he said.

As an artist, Bayandin is always in search of new techniques and styles. In the last four years, his works have evolved from slow and calm to energetic and thrilling. The key to a great painting, however, is the “inner state of a painter.”

“We are like scientists. We have to know a lot. Mistakes in anatomy and geometry are harshly criticised. Scientists are driven by a pure knowledge, while we painters have to use knowledge along with our hearts. Sometimes, it is only your heart that helps you to paint and then you end up with a fascinating piece of art,” he said.

His exhibit, “Through the eyes of the artist,” was shown last fall in the First President’s Library museum. He is now preparing “a concept” of his paintings to organise another showing next year.

Bayandin was born Dec. 14, 1966, in the small village of Kyzylzhar in the Aktobe region. He graduated from the Kazakh State Academy of Arts in 1994.

He won numerous fine arts exhibitions, festivals and symposiums in Kazakhstan and abroad. His works can be found in museums in the Baltic states, Germany, Kazakhstan, South Korea, the U.S. and other countries, while some are held in private collections. Bayandin has also illustrated the books “Kobylandy,” “Kotibar” and “Tailak batyr.”