By Saltanat Boteu in Nation on 30 November 2018

ASTANA – The ambassador of Oman to Kazakhstan spoke with The Astana Times about political, economic and cultural relations between the two nations during the Nov. 21 celebration of Oman’s 48th National Day at Astana’s Radisson Hotel, stressing tourism, agriculture and energy as the main fields of cooperation. 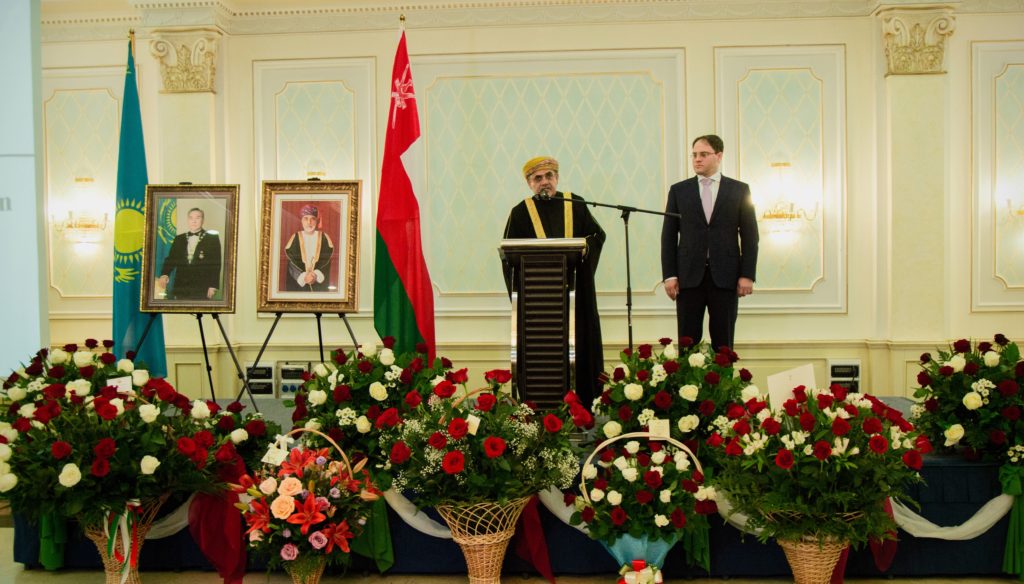 “I have the pleasure to welcome you at this festive ceremony dedicated to the 48th glorious anniversary of the National Day of the Oman Sultanate and thank you very much for your participation. It has been 48 years of the leadership of His Majesty Sultan Qaboos bin Said in Oman … During this period of its history, the Sultanate has enjoyed security, stability and well-being … We will always work for peace, security and stability in our region and the world,” said the ambassador.

He also congratulated Kazakhstan’s citizens on their upcoming Independence Day. Vassilenko pointed out the strong relationship between Oman and Kazakhstan.

“On behalf of the Kazakh government and myself, I would like to extend our wholehearted congratulations to our Omani friends on the 48th anniversary of the Oman Sultanate’s National Day. Since the establishment of diplomatic relations between Kazakhstan and Oman, our bilateral cooperation has been successfully developing due to the political will of our leaders. The official visit of President Nursultan Nazarbayev to Oman in 2008 gave a strong impetus for further cooperation and allowed us to verify our position on topical international and regional issues. In addition, the documents signed then laid a solid legal basis for our bilateral cooperation,” he said.

The deputy minister also touched on current conditions of the bilateral relationship, mentioning that overall direct investment from Oman to Kazakhstan from 2005 to 2018 amounted to more than $250 million and that Oman’s national oil company is helping develop the Pearl oil field in Kazakhstan’s sector of the Caspian Sea and the Dunga deposit in the country’s western Mangystau region.

Tourism is a sector the countries are eager to build, and the two recently signed an agreement on mutual exemption from visa requirements for holders of diplomatic, special and service passports.

Oman sees tourism as a rapidly developing sphere and hopes to sign a similar visa waiver for all citizens, the ambassador told The Astana Times.

Vassilenko concluded by emphasising the cultural ties between Oman and Kazakhstan.

“I would like to highlight that Kazakhstan Film Week and the ‘Astana, Heart of Eurasia’ photo exhibition took place in Muscat this year. Today I must also underline the high potential and tremendous opportunities that enable us to raise economic, trade and cultural ties to a new level… I would like to express our strong confidence in the further dynamic development of Kazakhstan-Oman relations for the benefit of both countries’ people,” he finished.

Barami also heralded the strong relationship between the countries.

“Kazakhstan and Oman have a great relationship. Oman is the first country in the Arab world that recognised the independence of Kazakhstan. President Nursultan Nazarbayev’s first visit to Oman was in 1997, during which several agreements and memoranda that contributed to the Oman-Kazakhstan relationship were signed… For us and for Arab world countries, Central Asia has an importance because we have ancient relations in a cultural and traditional context,” he commented.

Many Omani companies work in Kazakhstan, particularly in the oil and gas sphere. Many Omani business delegations have travelled to the country.

“We cooperate in the tourism, energy, business, and oil and gas spheres. We also have an interest in agriculture that includes grain and meat. Last year, we imported 1,000 sheep to Muscat,” said Barami.

“This is the first book about Oman in the Kazakh language written by the first Kazakh deputy minister after [Kazakhstan’s] independence, Sailau Batyrshauly. The book covers the history, politics, economy, nature and tourism of the country,” said the ambassador.