ASTANA – Astana Club, a platform to debate public issues based on Chatham House rules, kicked off its fourth annual meeting Nov. 12. The meeting focused on challenges facing the Eurasian region and the building of Eurasian strategic architecture. The meeting gathered 50 leading experts, politicians and diplomats from 33 countries. 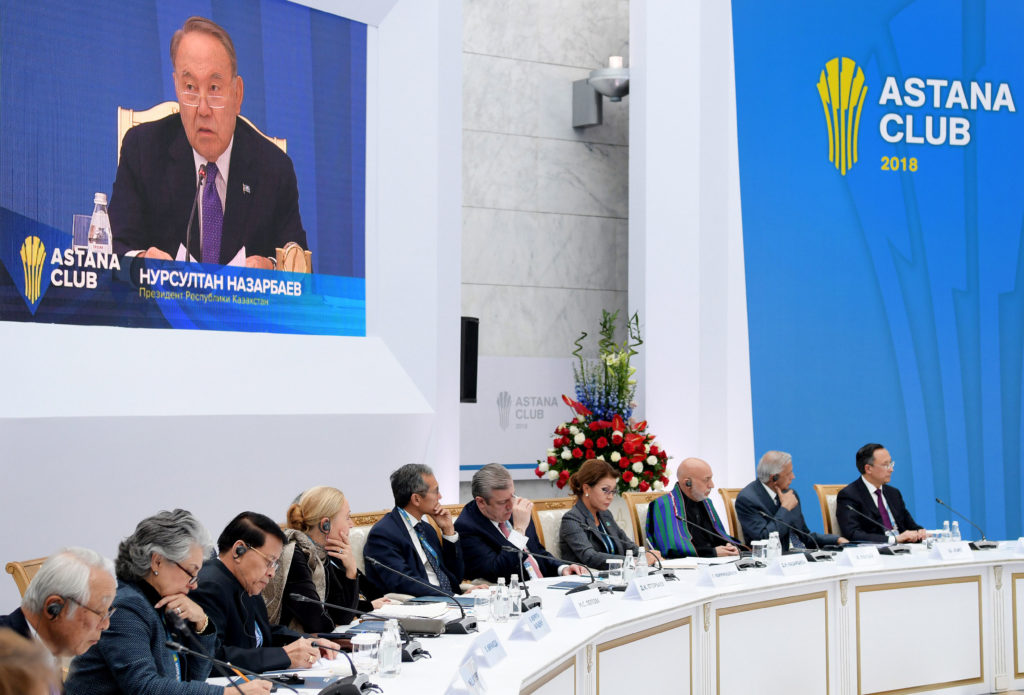 “First are the growing contradictions between major powers that intensify the instability of the current global order, making global events less predictable. We have not witnessed such a confrontation for quite a long time. The so-called post-bipolar world order becomes a thing of the past. We witness the formation of Greater Eurasia,” said Nazarbayev.

Escalating the geopolitical rivalry between China, Russia and the United States also impacts the Greater Eurasia context, he noted.

“Difficulties have always been present in this strategic triangle if we look back at history. Yet, the ability to manage them has drastically weakened in the recent years. Large scale crisis is more possible than ever before,” said the Kazakh President.

“The confrontation questions the efficiency of global development institutes and security in general. The foundation for strategic stability present since World War II is shattering,” he said.

Economic contradictions, in what is known as trade wars, are on the rise with an increasing threat posed to global economies.

“One of such wars is unfolding between the U.S. and China, together accounting for the third of the world’s economy, 20 percent of global exports and more than a third of investment flow. This will result in the economic downturn in general and will worsen the situation in developing countries,” said Nazarbayev.

Poverty and the unemployment rate, he noted, will continue to rise, turning into a fertile ground for terrorism, migration and separatism.

The same scenario, he noted, unfolded in Afghanistan.

The region is also vulnerable to sanctions introduced by countries unilaterally as a punitive measure to counter sanctions.

Nazarbayev said some parts of the Greater Eurasia may turn into the scene of large-scale military confrontation and the Middle East, where instability is caused by the Syrian crisis, political tensions in Iraq, civil war in Libya and internal challenges, is among such regions.

The breaking up of a landmark Iranian deal that, as Nazarbayev put it, was “achieved in difficult circumstances” exacerbates the situation. In May, U.S. President Donald Trump announced his country’s withdrawal from the agreement initially signed by the five permanent members of the UN Security Council: the United States, the United Kingdom, France, Russia and China, plus Germany and Iran.

Cyber security is turning into a new dimension of global stability. With cyber attacks being able to seize control over facilities and other strategic objects, Nazarbayev stressed the importance of guarding against such attacks.

He once again made of passionate plea to the countries to step up efforts towards achieving a nuclear weapons-free world.

Nazarbayev said the world is getting closer to repeating the Cuba crisis scenario, referring to the recent advancement of the NATO forces and deployment of new bases and military infrastructure closer to Russian borders.

As he went on to propose various solutions in order to bolster global security, the Kazakh President suggested updating the 1975 Helsinki Act, once a turning point in the Cold War signed by 35 nations at the height of the Cold War.

He proposed organising a conference in 2020 for the purpose of discussing this possibility that will also mark the document’s 40th anniversary.

“We understand that coming to a new agreement will not be easy. It is rational to start preparing for final negotiations already in 2019. Kazakhstan is ready to initiate this event, as we organised the first in this century OSCE (Organisation for Security and Cooperation in Europe) summit in Astana. As usual, many things will depend on the position of great powers. In this regard, I would like to call on the big states to join efforts to reach a new agreement,” said Nazarbayev.

He underlined the need to build a trust-based dialogue between nuclear powers and step up negotiations to decrease nuclear arsenals and create nuclear weapon-free zones.

To address growing trade tensions, the countries should sit at the table for negotiations under the auspices of the World Trade Organisation.

“Astana will host the ministerial meeting of this organisation in 2020. We see the solution in the formation of uniform fair rules for trade and investment cooperation. Of course, there is still the need to reaffirm intellectual property rights, develop flexible and effective rules for the transfer of technologies,” said Nazarbayev.

He also believes Asia needs its own collective security organisation.

“It is a matter of time. The Kazakh initiative of the Conference on Interaction and Confidence-Building Measures in Asia (CICA) that currently includes 30 countries in the Asian continent may serve as the foundation for future security and cooperation organisation in Asia. To this purpose, as the first step, I suggest organising a joint consultative meeting of the OSCE, CICA and ASEAN (Association of South East Asian Nations) regional forum on security,” he said.

Nazarbayev highlighted the importance of organising a Eurasian security conference, similar to the Munich Security Conference taking place in Munich since 1963.

The sixth proposal elaborated by the President stresses the need for the international community to develop a Global strategy of cooperation in the development of information space. 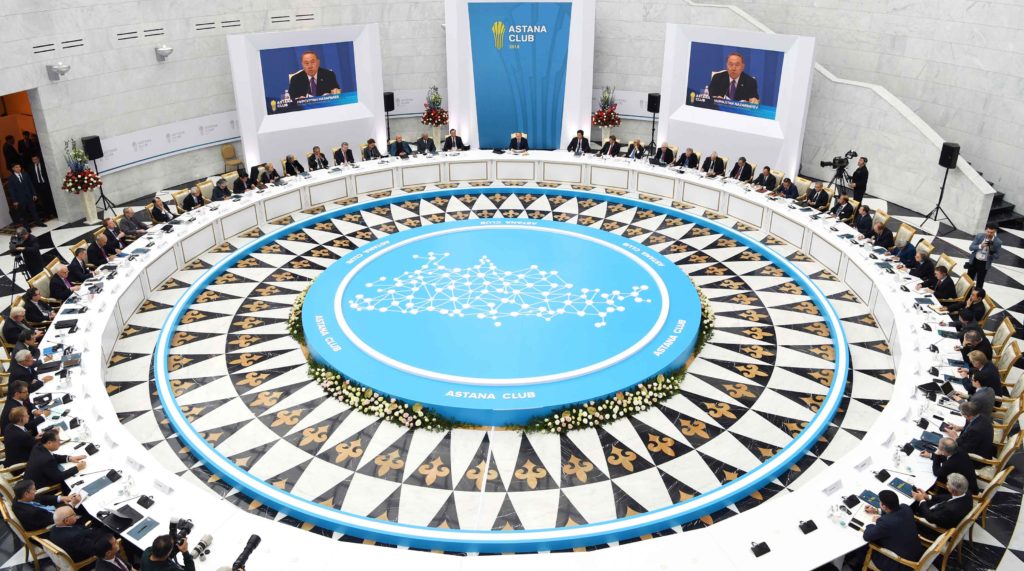 “Violence and polarisation between and within nations is spreading. Inequality is more flagged. International law and institutions are losing authority and influence. Our global security system is strained and instead of looking for multilateral dialogue and collective security, we are relying more and more on confrontation and unilateral use of force and, at best, sanctions,” said ElBaradei.

Countries continue to rely on nuclear weapons, in what he described as the “most horrifying component of global security system,” as a source of security and influence.

“We remain hostage for our survival on mutual assured destruction doctrine, which is dangerous, unsustainable and naive. It is a doctrine grounded on the premise that those who have nuclear weapons are more equal than others and is subject to inevitable human fallibility and miscalculation. Yet, today there are 15,000 nuclear weapons and 2,000 are on high alert,” he said, praising Kazakhstan and Nazarbayev personally for the commitment to eliminating nuclear weapons and the contribution to date. 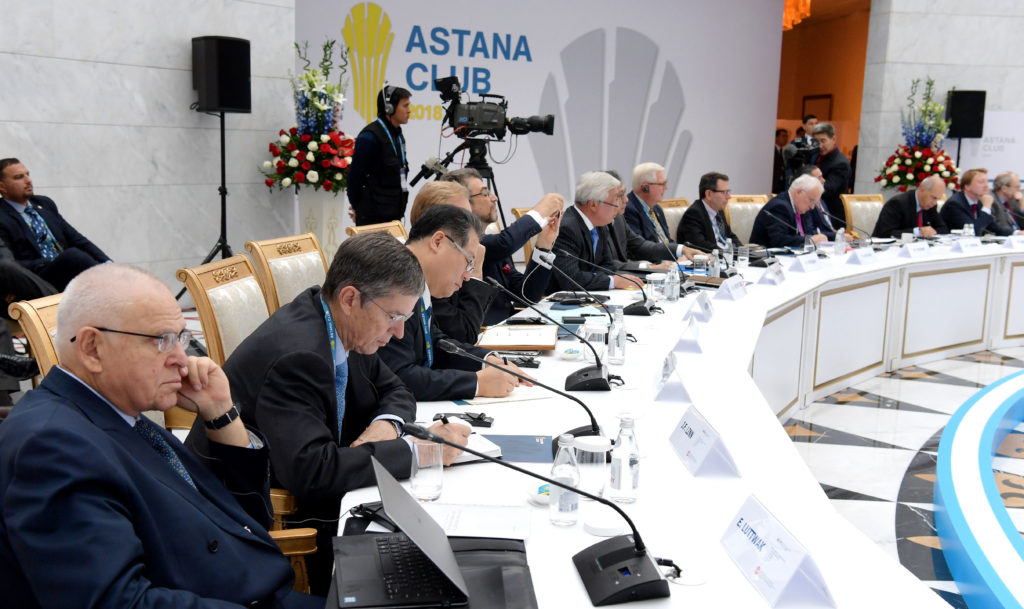 Countries are prisoners of history and geography, said former Afghan president Hamid Karzai, referring to his country’s geographical location that could be regarded by some as blessing and sometimes as a curse.

“We are a Central Asian country. We are also a South Asian country. If you see our linkages to Iran and Turkey, we are also a West Asian country. This combination brings Afghanistan to its very particular situation,” he said, highlighting a centuries-long rivalry between major powers and the rising terrorism activities in the country.

“Prolongation of war, continuation of extremism, increasing violence and terrorist organisation, arrival of Daish in Afghanistan. All of these gave rise to suspicion, especially among big powers. This poses our country with tremendous challenges that we can only overcome by being wiser ourselves as Afghans and by conducting ourselves more equitable wiser with our neighbours, region and big powers,” he said.

Afghanistan needs to learn a delicate balancing, he said, referring to Kazakhstan’s famed multi-vector policy. Though problems persist, there is still hope, he added.

“The recent American initiative to launch a peace process with the Taliban and also the Russian initiative of the Moscow dialogue format. We in Afghanistan hope that these two major powers will join hands and that these two initiatives by two important countries for us will also be assisted by China, India, Iran, and Pakistan especially and our friends and brothers, Turkey,” he said.

In his remarks, Karzai thanked Nazarbayev for Kazakhstan’s support of Afghanistan, including the country’s programme to offer 1,000 Afghans an opportunity to study in Kazakhstan.

Karzai also noted the country’s important role in encouraging dialogue between the sides.

Global order has not witnessed an inclusive restructuring since the Cold War, said Davutoglu.

“There has not been any sophisticated approach to reorganising international structures, international organisations, UN reform. We have regional instabilities and global crisis. The system itself is in crisis which is supposed to solve the crisis,” he said, emphasising the need for an inclusive approach to handling the crisis.

Davutoglu said the countries could benefit from regional initiatives, including the Belt and Road Initiative (BRI).

“We need a geopolitical stability, not ceasefire, but sustainable peace. We need geoeconomic interdependency like BRI, which all of us from East Asia, China up to Turkey and West Asia could benefit from. We all will be winners from this project,” said the Turkish politician, scholar and diplomat.